This guide contains protocols for protein digestion with trypsin, trypsin/lys-C or alternative proteases.

These applications primarily employ bottom-up proteomics, where proteins of interest are digested with an enzyme such as trypsin and the resulting peptides are analyzed by mass spectrometry. Bottom-up proteomics focuses on the analysis of protein mixtures after enzymatic digestion of the proteins into peptides. The resulting complex mixture of peptides is analyzed by reverse-phase liquid chromatography (RP-LC) coupled to tandem mass spectrometry (MS/MS). Identification of peptides and subsequently proteins is completed by matching peptide fragment ion spectra to theoretical spectra generated from protein databases.

Trypsin has become the gold standard for protein digestion to peptides for shotgun proteomics. Trypsin is a serine protease. It cleaves proteins into peptides with an average size of 700-1500 daltons, which is in the ideal range for MS (Laskay et al., 2013). It is highly specific, cutting at the carboxyl side of arginine and lysine residues. The C-terminal arginine and lysine peptides are charged, making them detectable by MS. Trypsin is highly active and tolerant of many additives. Typically, proteins are reduced and then alkylated to allow immediate access of trypsin to internal cleavage sites. This warrants high protein sequence coverage during mass spectrometry analysis (Wilkinson, 1986). If high sequence coverage is not required, reduction and alkylation steps can be omitted. Note: To digest a nonreduced protein, begin this protocol at Step 3.

More information and a detailed protocol for use of Trypsin Gold, Mass Spec Grade are available in Technical Bulletin #TB309. 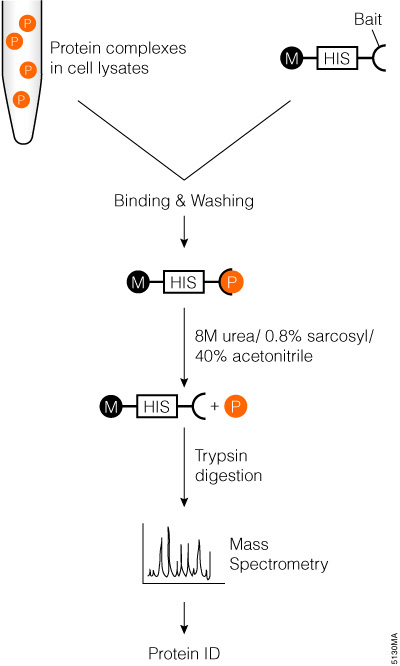 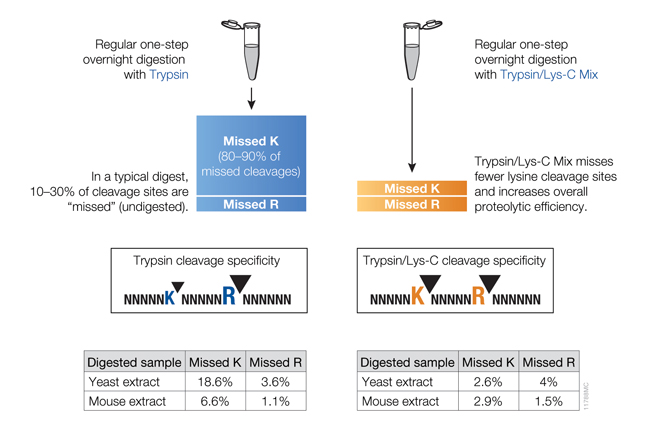 Tightly folded proteins represent a particular challenge; these proteins are resistant to proteolysis due to inaccessibility of internal cleavage sites for trypsin. Using Trypsin/Lys-C Mix helps overcome this challenge by enabling a two-step digestion protocol (Figure 4), which utilizes the tolerance of Lys-C protease to protein denaturing conditions. In step 1, a protein is denatured with 8M urea. Under these conditions, Lys-C remains active and digests a protein into relatively large fragments. In the second step, the digestion mixture is diluted fourfold to reduce urea concentration to 2M. This reactivates trypsin and allows complete proteolysis.

The use of trypsin in bottom-up proteomics may impose certain limits in the ability to grasp the full proteome. Tightly-folded proteins can resist trypsin digestion. Post-translational modifications (PTMs) present a different challenge for trypsin because glycans often limit trypsin access to cleavage sites, and acetylation makes lysine and arginine residues resistant to trypsin digestion.

Giansanti et. al. (2016) optimized protocols for six alternative proteases that have already shown promise in their applicability in proteomics, namely chymotrypsin, Lys-C, Lys-N, Asp-N, Glu-C and Arg-C have been created.

There are certain instances when trypsin does not provide adequate proteolysis. For example, many membrane proteins have limited number of tryptic cleavage sites. In other cases, distribution of tryptic cleavage sites is suboptimal, resulting in peptides that are too long or too short for mass spectrometry analysis. Promega offers various alternative proteases that complement trypsin and allow efficient protein analysis with mass spectrometry. Figure 5 highlights the benefits of the alternative protease chymotrypsin for protein mass spectrometry analysis. 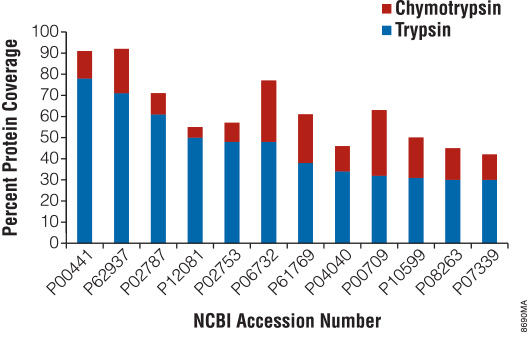 Arg-C, Sequencing Grade (Cat.# V1881), also known as clostripain, is an endopeptidase that cleaves at the C-terminus of arginine residues, including sites next to proline. Arg-C activity is optimal at pH 7.6–7.9.

Asp-N, Sequencing Grade (Cat.# V1621), is an endoproteinase that hydrolyzes peptide bonds at the N-terminal side of aspartic acid residues. Asp-N activity is optimal at pH 4.0–9.0.

rAsp-N, Mass Spec Grade (Cat.# VA1160), is a recombinant protease that was cloned from Stenotrophomonas maltophilia and purified from E. coli.

Chymotrypsin, Sequencing Grade (Cat.# V1061), is a serine endoproteinase derived from bovine pancreas. The protease preferentially hydrolyzes at the carboxyl side of aromatic amino acids: tyrosine, phenylalanine and tryptophan. Chymotrypsin activity is optimal at pH 7.0–9.0.

Glu-C, Sequencing Grade (Cat.# V1651), is a serine protease that cleaves specifically at the C-terminal side of glutamic acid residues in the presence of ammonium bicarbonate or ammonium acetate. In phosphate buffers, cleavage also occurs at aspartic acid residues. Glu-C activity is optimal at pH 4.0–9.0.

Elastase (Cat.# V1891) is a serine protease that preferentially cleaves at the C-terminus of alanine, valine, serine, glycine, leucine or isoleucine residues. Elastase activity is optimal at pH 9.0.

You can learn more about use of alternative proteases to improve coverage in the On-demand Webinar: Bottoms Up: Improving Proteomic Sample Preparation with Recombinant Asp-N.

ProteaseMAX™ Surfactant is an anionic surfactant that degrades over the course of a digestion reaction, generating degradation products that are innocuous to mass spectrometry. This feature eliminates the need for post-digestion degradation.

In-gel protein digestion saves time and labor. The digestion step is complete in 1 hour, and the ProteaseMAX™ Surfactant provides concurrent extraction of peptides from gels, eliminating the need for postdigestion peptide extraction. The surfactant also improves recovery of longer peptides that are typically retained in the gel using a standard extraction protocol. For a detailed protocol, refer to the ProteaseMAX™ Surfactant, Trypsin Enhancer, Technical Bulletin #TB373.