The HaloTag® platform provides a new purification approach based on covalent capture of the POI. The highly specific and irreversible binding of the HaloTag® protein to the HaloLink™ Resin enables efficient protein capture regardless of the expression level and significantly reduces protein loss during washes of the resin, resulting in higher protein recovery.

Recombinant protein purification is a commonly used method for researchers characterizing the function, structure and interactions of a protein of interest (POI). Affinity purification enables highly selective capture of the POI and rapid purification. There are many affinity tags available, such as His, Myc, GST and tandem tags.

The HaloTag® platform provides a new purification approach based on covalent capture of the POI (Figure 1). The highly specific and irreversible binding of the HaloTag® protein to the HaloLink™ Resin enables efficient protein capture regardless of the expression level and significantly reduces protein loss during washes of the resin, resulting in higher protein recovery. Since covalently bound fusion protein cannot be eluted by conventional methods, the protein of interest is released from the resin by specific cleavage at an optimized TEV recognition site. In addition, the absence of endogenous homologs of HaloTag® protein in mammalian cells minimizes concerns regarding cross-reactivity and results in a highly selective purification process. These features likely all contribute to higher purity and yield with the HaloTag® protein tag compared to 3x and His6tag systems.

All binding and wash steps were performed according to each resin manufacturer protocol. Prepared resins and their corresponding buffers were then divided into magnetic and nonmagnetic resin groups, and blinded (labels removed and coded alphabetically). Binding, washing, elution and analysis were performed without the researchers’ knowledge of the resin type they were using.

K562 cells were cultured, harvested and washed with 1X PBS. Mammalian Lysis Buffer (300µl; Cat.# G9381) was added to the cell pellet per 1 × 107 cells. Six microliters of 50X Protease Inhibitor Cocktail (Cat.# G6521) was added per 300µl of Lysis Buffer. The lysate was incubated on ice for 5 minutes, passed through a 25-gauge needle ten times, and centrifuged at maximum speed for 5 minutes.

Affinity resins (Table 1) were mixed by inversion and dispensed into microcentrifuge tubes with a final volume of 50µl (settled resin). For nonmagnetic beads, separations were performed by spinning at 800 x g for 1 minute and aspirating. For magnetic beads, separations were performed by adding to a magnetic stand, waiting 1 minute and aspirating. Resins were washed with 800µl of resin wash buffer for a total of 3 washes.

Table 1. List of Affinity Resins Tested in this Report.

Three hundred microliters (300µl) of the prepared lysate was mixed with 700µl of binding buffer (Table 2) prior to adding to the equilibrated resins. Lysates and resins were mixed for 1 hour at room temperature using a rotator.

Resins were washed a total of 4 times by adding 1ml of wash buffer (Table 2) and incubating for 5 minutes with mixing. Separation steps were performed as described in the equilibrating resins method.

Nonspecifically bound proteins were eluted by adding 50µl of SDS elution buffer (included with HaloTag® System). Resins were mixed in the elution buffer for 30 minutes at room temperature. Resins were separated from the eluate by passing through a filtered spin basket.


Table 2.  Buffers Used in this Report.

Fifteen microliters (15µl) of eluates were mixed with SDS loading buffer, heated to 95°C for 5 minutes and loaded onto a 4–20% SDS-PAGE gel. Gels were stained either with Coomassie® blue or silver stain.

Magne™ HaloTag® Beads were compared to two different vendors’ magnetic HIS resins, a magnetic FLAG® resin and a magnetic GST resin for the ability to bind nonspecific proteins (Figure 2). A Coomassie® blue-stained SDS-PAGE indicates that the Magne™ HaloTag® Beads had very little non-specific binding compared to all of the other resins tested. The HIS and GST resins had a large amount of non-specific binding as seen from the large number of bands on the gel. The FLAG® resin had less nonspecific binding compared to the HIS and GST resins, but it showed two protein bands at approximately 25kDa. These bands were presumably from the antibody linked to that resin. 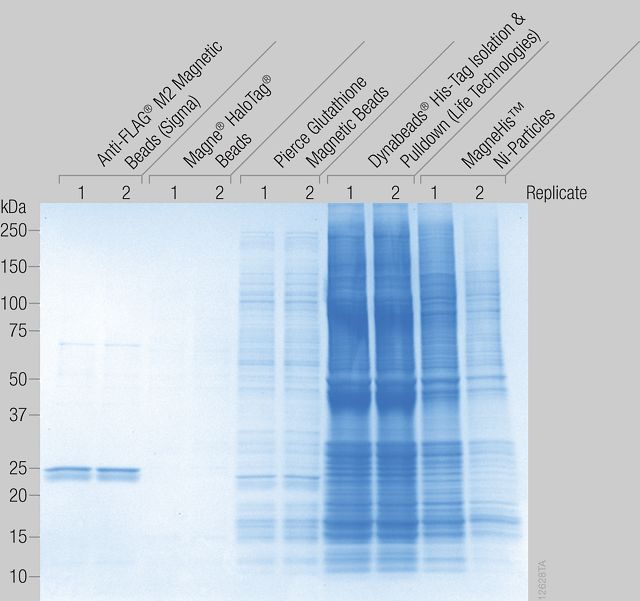 The labels above the gel identify Promega and competitor products. Purifications were performed in replicates of two. 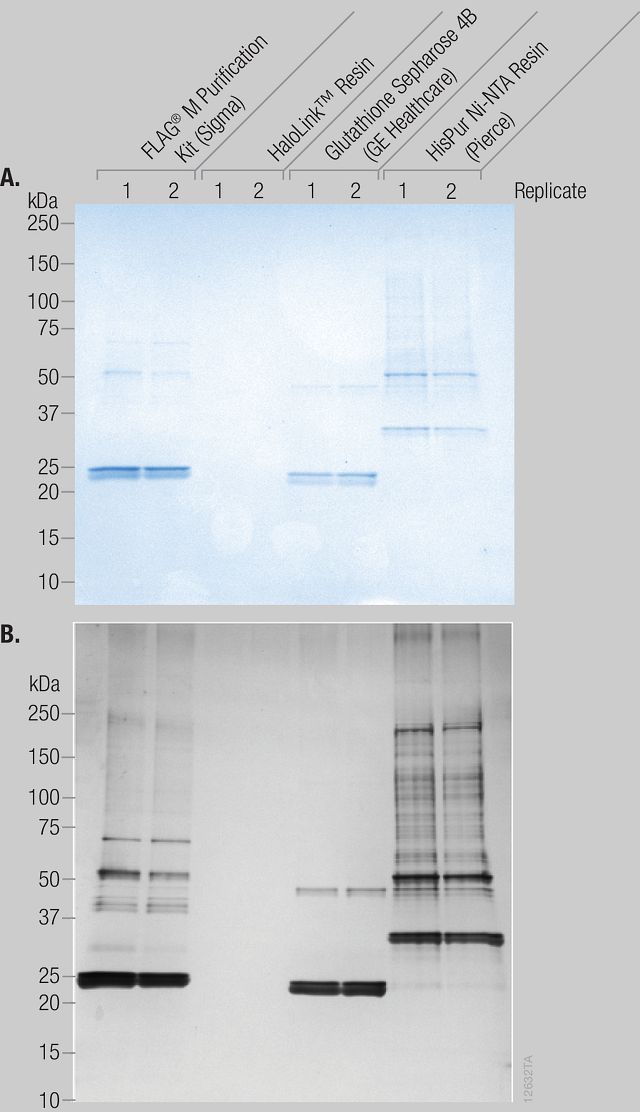 HaloLink™ resins, both magnetic and nonmagnetic forms, had significantly less nonspecific binding to a mammalian cell lysate than HIS, GST and FLAG® resins. Using HaloLink™ Resin will lead to more pure protein in a purification scheme. When performing pull-down assays, nonspecific binding can lead to more false positives and increase the amount of work required to validate protein interactions. The HaloTag® technology provides a fast, easy, and efficient method for protein purifications and protein pull-down studies.