The DNA IQ™ System is designed specifically for forensic and paternity labs to isolate DNA for short tandem repeat (STR) analysis and, due to the limited amounts of DNA found in many forensic samples, yields DNA that cannot be accurately quantitated by traditional UV-absorbance methods. To find an alternative to quantitative PCR, which is a more sensitive method commonly used for quantitating trace DNA, we tested the ability of fluorescent dye-based QuantiFluor® dsDNA and ssDNA Systems to quantitate DNA isolated using the DNA IQ™ System. Here we examined samples that had undergone various preprocessing protocols prior to DNA binding and found that the preprocessing temperature and buffer used dictate whether a single-stranded DNA or double-stranded DNA fluorescent dye system should be used for quantitation.

The DNA IQ™ System is a DNA isolation system designed specifically for forensic laboratories to extract DNA from a variety of sample types, including liquid samples and liquid stains on solid supports. Often these forensic samples contain very low or limiting amounts of DNA. For forensic laboratories, it can be important to quantitate accurately the amount of DNA present in these samples as downstream applications such as STR amplification require specific amounts of template for proper analysis and identification of the sample source. Fluorescent DNA-binding dye-based systems often are used to quantitate DNA purified from samples with low DNA concentrations as the systems are highly sensitive and can detect picogram amounts of DNA, significantly less than traditional UV absorbance analysis. Thus, for forensic laboratories these fluorescence dye systems represent a sensitive, fast and inexpensive alternative to qPCR for DNA quantitation from trace samples.

Blood was collected from a single donor in a K2EDTA Vacutainer® tube (BD Biosciences). Ten microliters of liquid blood and 10µl of blood spotted on a cotton swab were processed according to the DNA IQ™ Casework Pro Kit for Maxwell® 16 Technical Manual #TM332. Ten microliters of blood spotted on cotton swabs also was processed manually according to the DNA IQ™ Systems—Small Sample Casework Protocol Technical Bulletin #TB296, and 10µl of liquid blood samples were processed manually according to DNA IQ™ System—Database Protocol Technical Bulletin #TB297. The preprocessing requirements for each protocol are shown in Table 1. DNA samples purified using the Maxwell® 16 System were eluted in 50µl of Elution Buffer, and DNA samples isolated using the manual protocol were eluted in 100µl of Elution Buffer. 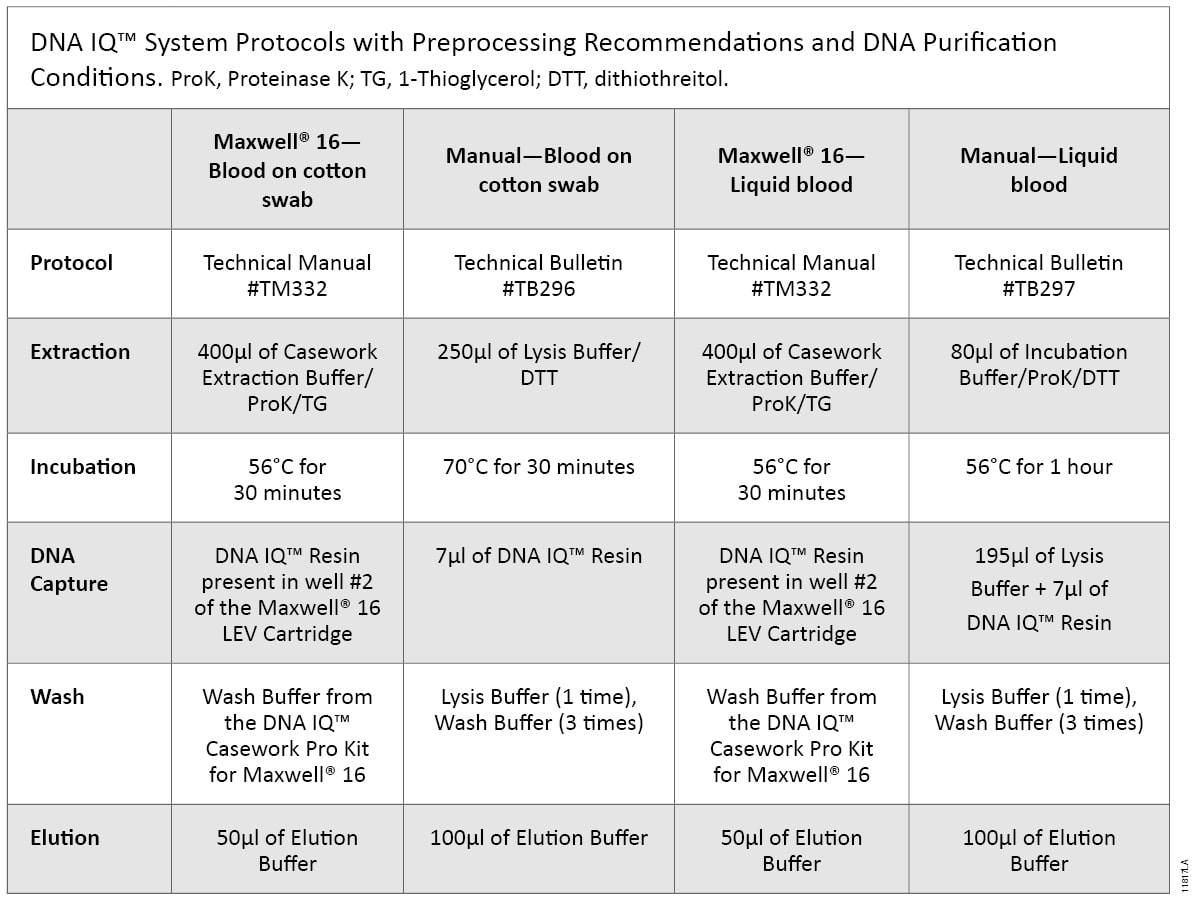 Figure 1 shows the dsDNA and ssDNA concentration obtained from each sample type using the QuantiFluor® dsDNA and ssDNA Systems. Samples processed using the Maxwell® 16 System yielded higher DNA concentrations because DNA was eluted in 50µl of Elution Buffer; samples processed using manual protocols were eluted with 100µl of Elution Buffer and so the DNA was more dilute. A ratio was calculated to compare the concentrations for each DNA form (Table 2). Samples of blood spotted on cotton swabs and processed manually (Manual–Blood on Cotton Swab) yielded two to three times as much ssDNA as dsDNA, while the inverse was true for the other sample types. Manual processing of blood on solid supports requires a 70°C incubation in the presence of Lysis Buffer and DTT (heated lysis protocol), while the other protocols require a 56°C incubation in the presence of Casework Extraction Buffer or Incubation Buffer with Proteinase K and 1-Thioglycerol. Thus, the heated lysis protocol results in a higher proportion of ssDNA than protocols requiring heating in Casework Extraction Buffer or Incubation Buffer. 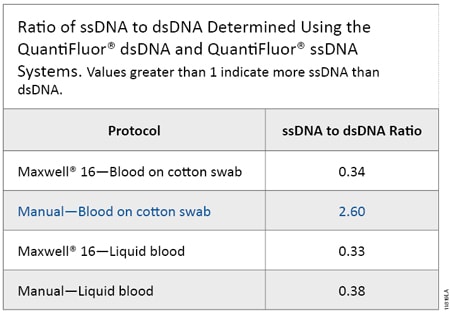 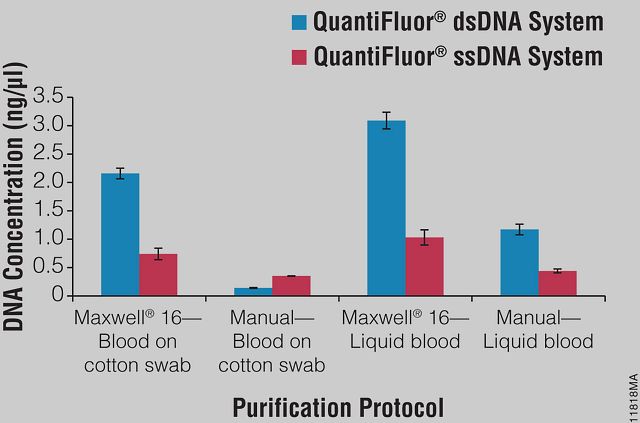 Figure 1. The QuantiFluor® dsDNA System and QuantiFluor® ssDNA System (with shrimp DNase digestion) were used to determine DNA concentrations from automated (DNA IQ™ Casework Pro Kit for Maxwell® 16) or manual protocols for DNA purification from liquid blood or blood on a cotton swab.

Sensitive quantitation of dsDNA in solution.