Inflammasomes are protein complexes induced by a diverse set of inflammatory stimuli. Innate immune cells respond to pathogens and other danger signals with the formation of various inflammasomes and the activation of caspase-1. Caspase-1 activation leads to processing and release of the cytokines, IL-1β and IL-18, and an immunogenic form of programmed cell death called pyroptosis.

While the innate immune system has evolved as a rapid defense mechanism to infection, and inflammation is a protective response to infection, dysregulation can lead to chronic inflammatory diseases. Chronic inflammation is linked to many diseases including asthma, rheumatoid arthritis, inflammatory bowel syndrome, Alzheimer’s, Type II diabetes and heart disease. As more attention is focused on the role of inflammation in human disease, understanding the role of the inflammasome and having the ability to measure inflammasome activation will become increasingly valuable.

Inflammasome activation is typically measured by Western Blot or ELISA. While these are standard methods, both are cumbersome and time consuming and may require making lysates or using serum-free supernatant. Other drawbacks include variable caspase-1 antibody quality and the limited dynamic range of ELISAs. More importantly, Western blots and ELISAs do not necessarily monitor active enzyme. Inflammasome activity can be missed using a Western blot because oligomerization but not cleavage of caspase-1 is required for activity (1) . ELISA analysis of released IL-1β as a marker for inflammasome activation can be complicated by IL-1β that may be processed extracellularly by other proteases (2) or antibody cross-reactivity with pro-IL-1β that can be released when there is cytotoxicity.

The Caspase-Glo® 1 Inflammasome Assay is a better alternative to conventional methods of detecting inflammasome activity. The simple “add-mix-measure” protocol eliminates cell washing, medium removal and multiple pipetting steps that are required for Western blot and ELISA analysis. The Caspase-Glo® 1 Inflammasome Assay can directly measure caspase-1 activity in cells or medium from cultured cells in microwell plates. By measuring released, active caspase-1 from transferred culture medium, you can preserve the biological sample for downstream analysis with other assays. 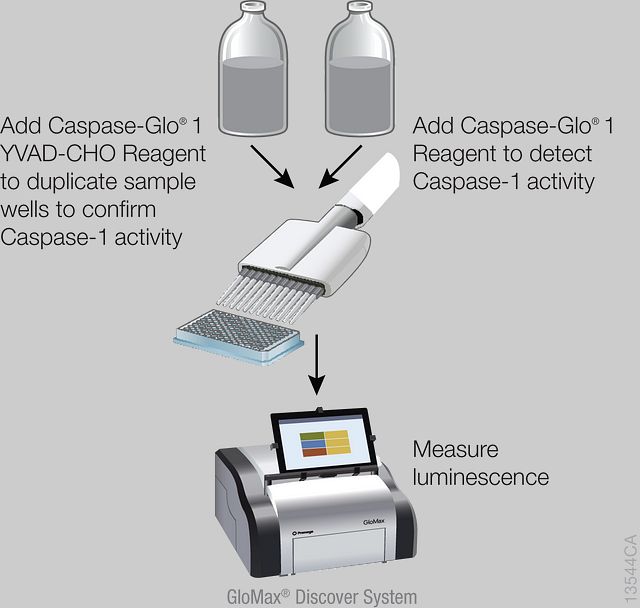 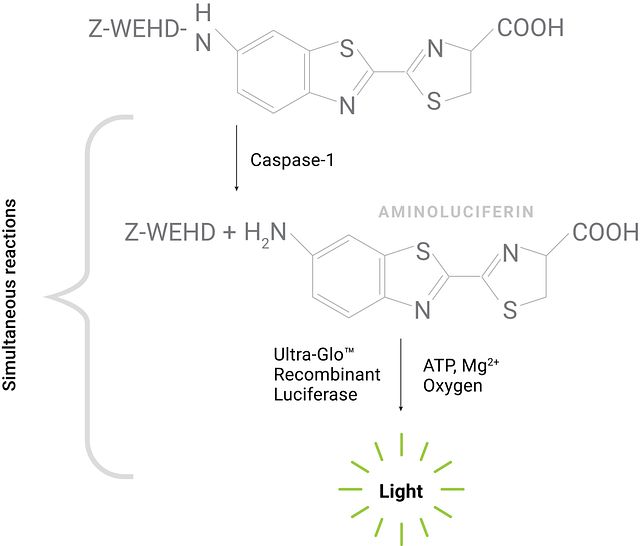 The addition of MG-132 inhibits non-specific proteasome activity, enabling direct detection of caspase-1 activity. Since the assay detects only catalytically active caspase-1, you can determine the precise time course of inflammasome activation and deactivation. The assay can also differentiate inflammasome activation and the resulting pyroptosis from apoptosis or necrosis (Figure 4). Using the Ac-YVAD-CHO caspase-1 inhibitor in parallel samples confirms the activity is caspase-1 specific. Ac-YVAD-CHO inhibits all of the caspase-1 signal but does not inhibit other cross-reacting caspases, such as caspases 3 and 6 which are both associated with apoptosis. Therefore, a signal inhibited by YVAD-CHO indicates caspase-1 activity, whereas a signal that is not inhibited by YVAD-CHO indicates another caspase. 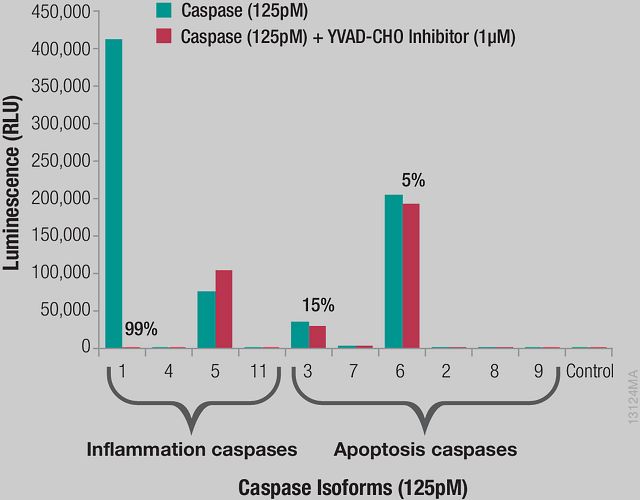 Figure 3. Caspase-1 Activity is Distinguished From Other Caspases.

Ten caspases were assayed at 125pM using the Z-WEHD-aminoluciferin substrate with and without Ac-YVAD-CHO Inhibitor at a final concentration of 1μM. Caspase-11 was the only mouse caspase; all others were human. Caspase-8 is also a noncanonical inflammation caspase. Percentages indicate the percent inhibition with Ac-YVAD-CHO Inhibitor.

Panel A. [Apoptosis vs Inflammasome Activation] THP-1 cells grown in RPMI 1640 medium supplemented with 10% FBS in a 37°C incubator with 5% CO2 were treated with the apoptosis inducers doxorubicin, aphidicolin, paclitaxel and puromycin for 18 hours. THP-1 cells in a second plate were treated with the inflammasome inducers nigericin (20μM) and α-hemolysin (2μg/ml) for 2 hours or with ionomycin (100μM) for 2 hours to induce necrosis. The YVAD-CHO or VEID-CHO inhibitor was added to the Caspase-Glo® 1 Reagent at 2μM for a final concentration of 1μM in the assay. Luminescence was measured using a GloMax® Multi+ Detection System after 60 minutes. Inhibition by YVAD-CHO indicates enzyme activity can be attributed to caspase-1, whereas inhibition by VEID-CHO indicates apoptosis caspase activity that is not caspase-1. Panel B. [Necrosis vs Inflammasome Activation] CellTox™ Green Cytotoxicity Reagent was added to cells at the same time as the nigericin, α-hemolysin and ionomycin, and fluorescence (cytotoxicity) was monitored just before adding the Caspase-Glo® 1 Reagent. The increased fluorescent signal with treatment indicates membrane permeability and cell death.

The sensitivity and low background of the assay enable it to be used on cells in culture in microwell plates or with cell culture supernatant. In addition, you can perform same-well multiplexing with other compatible assays (e.g., CellTox™ Green Cytotoxicity Assay). Multiplexing will allow you to save time and distinguish between different outcomes of caspase-1 activation by monitoring cell death and cytokine release. Detection of caspase-1 activation along with cell death indicates pyroptosis. You can also multiplex this assay with an IL-1β ELISA by removing a portion of the culture medium and measuring released IL-1β followed by the caspase-1 assay on the remaining cells and culture medium.

THP-1 cells were grown in RPMI 1640 medium supplemented with 10% FBS in a 37°C incubator with 5% CO2. Cells were added to plates at 5 × 105 cells/ml in 100μl of medium and differentiated with PMA (20nM, 3 days) in 96-well plates followed by treatment with flagellin (1μg/ml, 1 hour) or nigericin (20μM, 2 hours). Panel A. Half of the culture medium (50μl) was transferred to a separate plate, and 50μl of Caspase-Glo® 1 Reagent or Caspase-Glo® 1 YVAD-CHO Reagent was added to each well. Luminescence was recorded after 30 minutes. The original plate with the cells and half of the culture medium was then assayed using the CellTox™ Green Cytotoxicity Assay, CellTiter-Glo® Luminescent Cell Viability Assay or RealTime-Glo™ MT Cell Viability Assay as per the manufacturer’s instructions. Panel B. CellTox™ Green Reagent was added to the cells, and fluorescence was recorded after 90 minutes. Panel C. Cell viability was monitored with CellTiter-Glo® or RealTime-Glo™ MT Cell Viability Assay. Luminescence was recorded at 10 minutes and 90 minutes, respectively. All luminescence and fluorescence readings were recorded using a GloMax® Multi+ Detection System.

Other Key Benefits and Features

The Caspase-Glo® 1 Inflammasome Assay is ideal for automated high-throughput screening. The homogeneous protocol enables easy scaling and automation in 96- and 384-well formats. The high throughput capability of this convenient caspase-1 assay will allow you to screen for modulators of inflammasome activation. Although luminescence can be measured after only one hour, the luminescent caspase-1 signal is stable in the Caspase-Glo® 1 Reagent (half-life >3 hours). This allows you to read plates over a few hours and eliminates the need for a luminometer with reagent injectors.

Caspase-Glo, CellTiter-Glo and GloMax are registered trademarks of Promega Corporation.