In search for a cheap and reliable “hotness”-biosensor, we established a luminescent signaling pathway in E. coli. The receptor and signaling pathway of A. tumefaciens was transferred into E. coli Top 10 cells and connected to a luminescent read-out. The signaling pathway allows for reliable quantification of the inducing molecule acetosyringone, a close relative of capsaicine, the hotness molecule. This project was part of the IGEM 2010 competition.

[Editor's Note: The International Genetically Engineered Machine competition (iGEM) is the premiere undergraduate Synthetic Biology competition. At the beginning of the summer, student teams are given a kit of biological parts from the Registry of Standard Biological Parts. They spend the summer working with their teams at their schools to build biological systems and operate them in living cells.]

The model organism Agrobacterium tumefaciens is a soil bacterium and the causative agent of the crown gall disease in dicotyledonous plant species(1).  The VirA receptor of A. tumefaciens recognizes phenols and initiates a signal transduction cascade for the expression of virulence (vir) genes. The initiation of an infection is controlled by a two-component system comprised of the transmembrane-bound sensor (VirA ) and the intracellular response regulator (VirG; (1)(2)). Upon activation by phenol  3,5-dimethoxyacetophenone (acetosyringone), the histidine kinase VirA is autophosphorylated at its His-474 residue (3)(4); the phosphor is then transferred to VirG(5)(6)(7)(Figure 1). VirG acts as a transcription factor and binds to a promoter containing the virulence box (vir Box); for example, the virB promoter(5) (8). 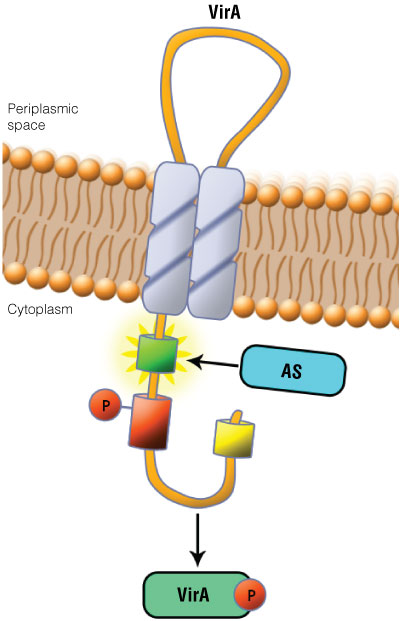 In A. thumefaciens, the VirA receptor is located in the inner membrane with a loop structure in the periplasmatic space. The ligand acetosyringone (AS) activates VirA. After autophosphorylation of VirA the phosphate is transferred to the response regulator VirG.

The aim of our project was to transfer the very specific recognition and signaling mechanisms of A. tumefaciens into a standard expression system. We subcloned virA and virG into the E. coli TOP10 cells. To exclude a coactivation of other A. tumefaciens pathways, we also subcloned the inducible promoter virB. All the plasmid constructs we generated were conform using the guidelines of the BioBrick standard, and thus, can be assembled easily in any chosen order.

We built a BioBrick with a luminescent read out system to quantify the target substance. For this purpose the virG inducible and vir box-containing promotor virB were cloned upstream of the firefly luciferase gene.

To design a new biosensor based on the receptor binding site of VirA a proof of principle had to be established. We used the native ligand of VirA, the phenol acetosyringone, to induce a luciferase-based light signal in E.coli (Figure 2). 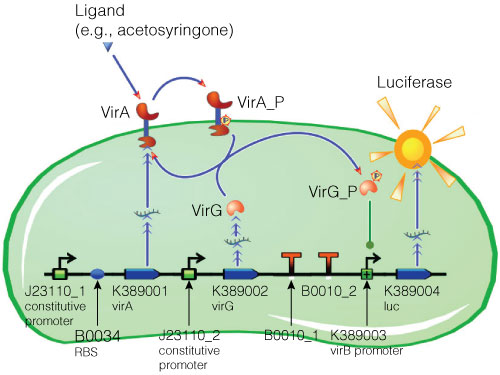 Choosing the restriction sites of both inserts enables the right orientation of the BioBrick parts.

E. coli Top 10 glycerol stocks were transformed with the pGL4.10[luc2]-BioBrick construct and cultivated with appropriate antibiotics at 37°C with shaking at 175 rpm. The handling of the bacterial culture depends on the read out-strategy that will be used. 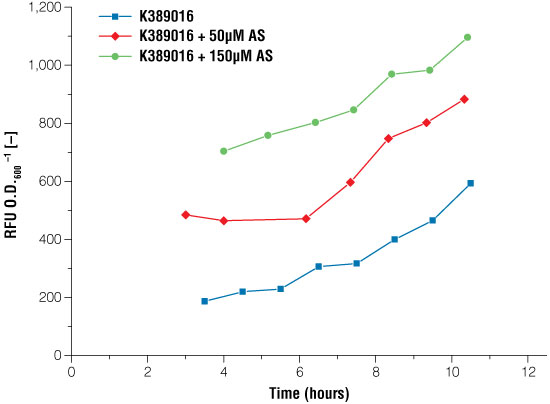 To characterize the luciferase expression response to acetosyringone induction, we calculated a fitting curve. Following the approach described in Nelson et al. (9), we used a dose response function and a logistic equation(1) for the data calculation of the receptor system. The luminescent response was proportional to the concentration of acetosyringone used for induction(3).

Figure 5. Expression of bioluminescence in E. coli is dependent on certain inducer concentrations when acetosyringone is the inducer.

Dataset is normalized to a reference shaker flask cultivation without induction and to the timepoint t = 0. Every datapoint is the average value from three biological replicates. Switching point (50% of maximum induction) occurs at acetosyringone concentration of 31.5μM and at 100% induction the luciferase light signal is increased two times compared to the uninduced status.

Next we created three new BioBricks containing the virA, virG or vir promoter. We also tried to create a light signal that is visible to the naked eye. For this purpose we added genetic amplifiers (Cambridge, iGEM 2007, amplifier project) to our luciferase BioBrick. This amplified luciferase read out was coupled with the VirA/G signaling system to visualize the induction behavior. Although the amplifiers gave visible luciferase readout, the basal expression of the vir promoter was also amplified. Due to the strong amplification of both the basal expression and the induced expression, the VirA/G system could not be clearly distinguished from uninduced samples (Figure 6). 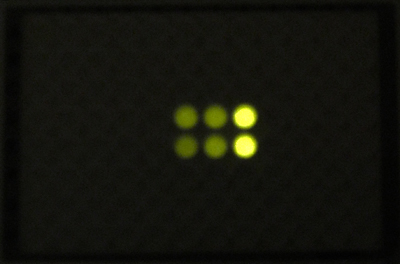 In this project we established an E.coli-based biosensor that is capable of sensing and measuring acetosyringone induction. Besides the functionality of the VirA/VirG two component system in E.coli, which was shown previously by Jung et al. (10), we combined the signaling pathway with a luciferase-based read out system. We further demonstrated that the luciferase intensity correlated with the concentration of acetosysringone used to induce the cells. When this data was fitted to a dose-response curve, it was shown to be in close relation to the expected biological function of the receptor. The basal luciferase expression that was present in the uninduced system is the result of a leaking virB promoter. However, when the cells were induced with a saturating concentration of acetosyringone, the luciferase expression was up to twofold higher than for the uninduced state.

Furthermore we provided eight new BioBrick parts to the database, which can be used in prospective projects.

To design a novel biosensor using a directed evolution driven approach to receptor modification, we established an error prone PCR protocol as well as a screening system (data not shown). In the ongoing work we are going to use an iterative process to optimize the receptor specificity and selectivity to closely related phenolic compounds ( e.g., capsaicine).

The iGEM Project was supported by the Center for Biotechnology, CeBiTec at the University Bielefeld, Germany. Additional Project Funding was provided by: BIO.NRW Cluster Biotechnology of federal state of North Rhine-Westfalia,  Evonik GmbH,  Promega GmbH,  PlasmidFactory & Co.KG and  A.S.I.