G protein-coupled receptors (GPCRs), also known as 7TM receptors, constitute the largest superfamily of cell surface receptors. These receptors play key roles in regulation of a wide variety of physiological processes, including cognition, metabolism, inflammation, immunity and cell proliferation, as well as development. As a result, GPCRs have been popular drug targets; 40% of approved drugs (or drugs currently on the market) directly target GPCRs. Despite the large number of GPCRs that are available as potential drug targets, currently approved drugs only address a small portion of the known receptors; hundreds of other compounds are under development. Thus, this target class remains an area of strong interest in drug discovery.

Despite the large number of GPCRs that are available as potential drug targets, currently approved drugs only address a small portion of the known receptors; hundreds of other compounds are under development.

The G protein coupling profile has not been fully characterized for many GPCRs. Some GPCRs only couple to one type of G protein (e.g., Gs or Gi), but many GPCRs couple to a broad range of G-protein families, such Gi/G12, Gq/G12, or Gi/Gq/G12,(1) . Current methods employed in GPCR screening programs measure G protein signaling by determining change in second messengers such as cAMP, inositol triphosphate (IP3) and intracellular Ca2+ mobilizations, which often demands setting up different assay platforms and requires specialized instrumentation for each pathway and can be costly. Reporter gene assays offer a simple solution for the study and characterization of receptor/G protein coupling, because reporter vectors with specific response elements (CRE, NFAT-RE, SRE, SRF-RE) are available for Gs, Gi, Gq and G12 pathways (Figure 1). 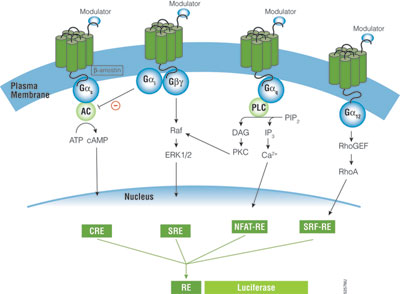 Reporter gene systems are used widely for studying gene regulation in response to GPCRs. There are many reporter genes available, including alkaline phosphatase, β-galactosidase, β-lactamase, green fluorescent protein and luciferase. Among them, luciferase is the reporter of choice especially in high-throughput screening due to its sensitivity, broad dynamic range, lack of endogenous activity and inherently low interference from compound libraries (2). The pGL4 Vectors containing minimal promoter and Rapid Response™ luciferase have been shown to improve the responsiveness of cAMP response element to Gs-coupled receptor. We further constructed SRE and SRF-RE reporter in various pGL4 Vectors and transiently expressed these reporters in HEK293 cells. By adding protein degradation sequences hPEST and hCL to the C-terminus of luciferase, both SRE- and SRF-RE reporters gave a larger induction response (75- to 120-fold) with a lower basal activity than did traditional luciferase without degradation signals (Figure 2). In addition, the destabilized luciferase response was rapid, reaching a maximum induction in 4–6 hours. The pGL4.33[luc2P/SRE/Hygro] Vector and pGL4.34[luc2P/SRF-RE/Hygro] Vector contain SRE and SRF-RE, respectively, upstream of the minimal promoter and Rapid Response™ luciferase. SRE is known to respond to ternary complex factor (TCF)-dependent MAP kinase pathway, while SRF-RE, a mutant form of SRE lacking TCF binding domain, is designed to respond to SRF-dependent and TCF-independent pathways, such as RhoA activation. GPCRs, particularly those coupled with Gi and Gq can activate the MAPK pathway and induce transcriptional activation of SRE, while GPCRs coupled with G12 family are known to activate Rho guanine nucleotide exchange factors (RhoGEFs), which leads to activation of RhoA and transcriptional activation of SRF-RE (3).

HEK293 cells transiently transfected with pGL4.33 and pGL4.34 reporter vectors show a large dynamic range of luciferase expression upon activation of GPCR (Figure 3). Cells expressing m3 muscarinic receptor (Gq-coupled) and SRE reporter showed 50-fold induction after six hours of treatment with various agonists. Among the agonists, muscarinic chloride was the most potent, with an EC50 of 19nM, followed by carbachol, then pilocarpine. Two antagonists were tested in the presence of carbachol: scopolamine with an IC50 of 0.07nM was much more potent than pirenzipine. Similarly, double transfection of SRF-RE with thromboxane A2 receptor (G12-coupled) showed a dose-response curve with agonists (120-fold induction) and antagonists. The potency ranking for agonist is I-BOP (EC50 =0.16nM) > U46619 = U44069 and for antagonist, as BM-531 > SQ-29548. The orders of potency ranking are consistent with previous reports, indicating that results from luciferase reporter assay reflect biologically relevant conditions (4–5). 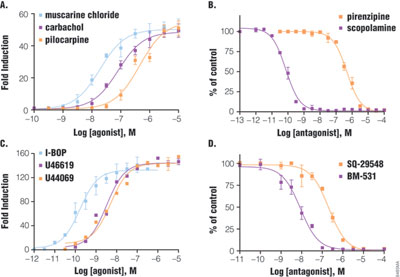 Figure 3. Ranking agonist and antagonist using SRE and SRF-RE reporters. HEK293 cells were transiently cotransfected with SRE-luc2P and m3 muscarinic receptor (M3R)-Renilla fusion or SRF-RE-luc2P, thromboxane A2 receptor (TPA2) and Renilla luciferase. Twenty-four hours after transfection, cells were induced for 6 hours by the addition of 1:3 serial dilutions of agonist or antagonist (in the presence of agonist), then firefly luciferase activity was measured using the Dual-Glo® Luciferase Assay System (Cat.# E2920) in a 96-well format. For antagonist assays, 10nM carbachol was used for M3R, and 10nM U46619 was used for TPA2 as agonist. Fold induction = firefly RLUinduced/firefly RLUnoninduced; % control = 100 x firefly RLUagonist + antagonist/firefly RLUagonist only. All were normalized to Renilla RLU.

Z´-factor is the major statistical parameter used to evaluate assay performance in high-throughput screening for drug discovery. The Z´-factor is determined as follows: Z´ = 1 – [(3 × SD high + 3 × SD low) / (average high – average low)]. The closer the Z´-factor is to 1, the better the assay quality. In general, values >0.5 are acceptable for HTS. Four GPCRs were chosen: D1 dopamine receptor, m4 muscarinic receptor, m3 muscarinic receptor and endogenous EDG receptor. All are known to couple with Gs, Gi, Gq and G12 subfamily, respectively, and co-express stably (CRE and NFAT-RE) or transiently (SRE and SRF-RE) with the corresponding reporter vector in HEK293 cells. Cells were then stimulated by agonist, and Z´-factor values were determined to evaluate assay performance (Figure 4). All assays showed Z´-factor values significantly higher than 0.5 in a 384-well plate format, and the response dynamic (fold induction) ranged from 11- to 366-fold. GPCRs can couple to multiple G proteins in one cell type, or couple to different G proteins in cell type-dependent manner. Also, more and more evidence indicates that the same receptor can activate multiple signaling pathways with different potencies depending on the ligand, which binds to the receptor orthosterically or allosterically (6). This has great potential for developing pathway-specific drugs that increase efficacy and reduce side effects, and add another dimension in assay complexity to compound screening. Despite significant interest, progress has been slow to include receptor/G-protein profiling in current drug screening practice, partly due to the significant burden of setting up multiple assay platforms.

Despite significant interest in receptor/G-protein profiling, progress has been slow to include GPCRs in current drug screening practice. 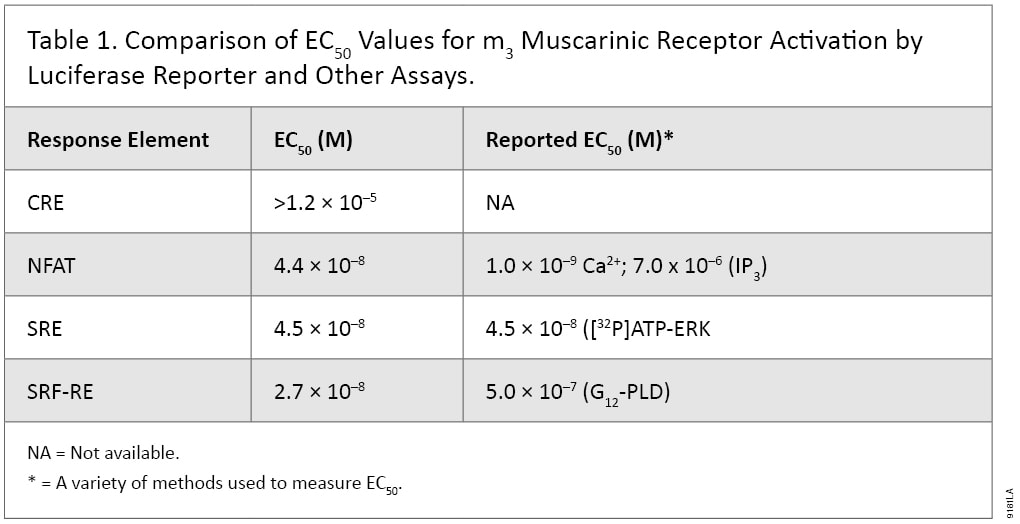 Table 1. Comparison of EC50 Value for m3 Muscarinic Receptor Activation by Luciferase Reporter and Other Assays.

Here we have shown that Rapid Response™ luciferase reporter is well suited for studying GPCR signaling pathways and for high-throughput screening in drug discovery. GPCR modulators can be readily evaluated for their potency as agonists or antagonists, and the results reflect biologically relevant conditions. Luciferase reporter assays are easily applied to high-throughput screening with high Z´-factor values. In a single-assay format, individual GPCR pathways (Gs, Gi, Gq and G12) can be measured using CRE-, NFAT, SRE- and SRF-RE reporter vector assays, respectively.

Our vectors report the activity of a variety of pathways using the opimized luc2 firefly luciferase gene in the pGL4 backbone.
Learn More