The Eluator™ Vacuum Elution Device provides a fast, convenient way to elute plasmid DNA when using a vacuum method for plasmid purification. The Eluator™ device is designed to eliminate the need for table-top centrifugation and transfer of eluted DNA from a larger tube by direct elution into a 1.5ml microtube using a vacuum. The device also reduces the amount of dead volume of elution buffer caused by hydration of the DNA-binding membrane, allowing increased concentration and yield of the purified plasmid DNA sample. This quality also allows the user to use lower elution volumes more effectively.

"The Eluator™ Vacuum Elution Device is designed to eliminate the need for table-top centrifugation and transfer of eluted DNA from a larger tube by direct elution into a 1.5ml microtube."

One liter of Luria Broth (LB) containing 100mg/ml ampicillin was inoculated with Single Step (KRX) Competent Cells containing the high-copy pluc2-control-pA plasmid and grown for approximately 20 hours at 37°C. Bacterial pellets were obtained from 50ml of culture by centrifugation at 5,000 × g for 10 minutes. Plasmid DNA was purified using the PureYield™ Plasmid Midiprep System following the standard DNA purification protocol with the Vac-Man® Laboratory Vacuum Manifold. Recommended volumes for plasmid DNA elution are 400–600µl. Plasmid DNA was eluted using the Eluator™ Vacuum Elution Device with the following volumes of nuclease-free water (in triplicate): 200µl, 300µl 400µ, 500µl and 600µl. Final elution volumes were recorded. Concentrations and yields were calculated from absorbance at 260nm using a NanoDrop spectrophotometer. Purity was calculated from absorbance at 260nm/280nm and 260nm/230nm.

The samples eluted with the Eluator™ using lower elution volumes resulted in higher concentrations of DNA but lower yields due to the decreased elution volume. Figure 1 lists average DNA yield and concentration based on the elution volume added. The A260/A280 and A260/A230 ratios of all samples were >1.80, indicative of high DNA purity (data not shown). 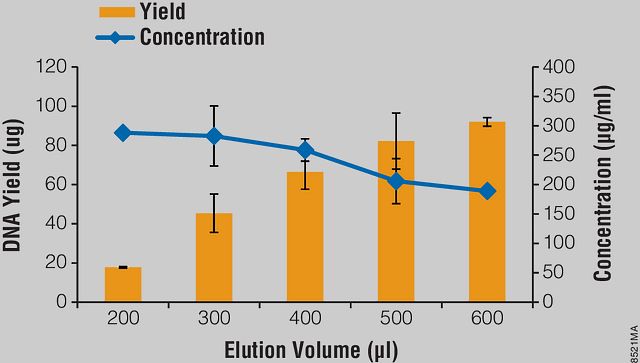 Plasmid DNA was purified from 50ml of culture using the PureYield™ Plasmid Midiprep System. Elutions for each volume were performed in triplicate.

Using lower elution volumes than the recommended 400–600µl for the PureYield™ Midiprep System with the Eluator™ Vacuum Elution Device led to higher DNA concentrations,but lower overall yields. This can be beneficial when higher DNA concentrations are preferred over higher yields for downstream applications such as transfection, cell-free transcription/translation, and sequencing.

Increase yield and purify with the Eluator™ Vacuum Elution Device.