Here we compare the PureYield™ Miniprep, Midiprep and Maxiprep Systems to other plasmid purification systems. In most cases the PureYield™ Systems outperform several other systems in terms of speed of purification, as well as quality and downstream performance of plasmid DNA.

Bacterial plasmids are common research tools for a variety of applications including cloning, transfection, cell-free transcription/translation reactions and DNA sequencing. Most plasmid purification systems lyse bacterial cells using a modified alkaline lysis method(1) followed by purification of the plasmid by binding to a column. Columns are typically washed with an alcohol-containing solution to remove contaminants, and DNA is eluted from the column with an appropriate buffer. This “bind, wash, elute” procedure has been improved over the years to meet the increasing demands for a simple and rapid protocol, resulting in high yields of highly pure plasmid DNA. 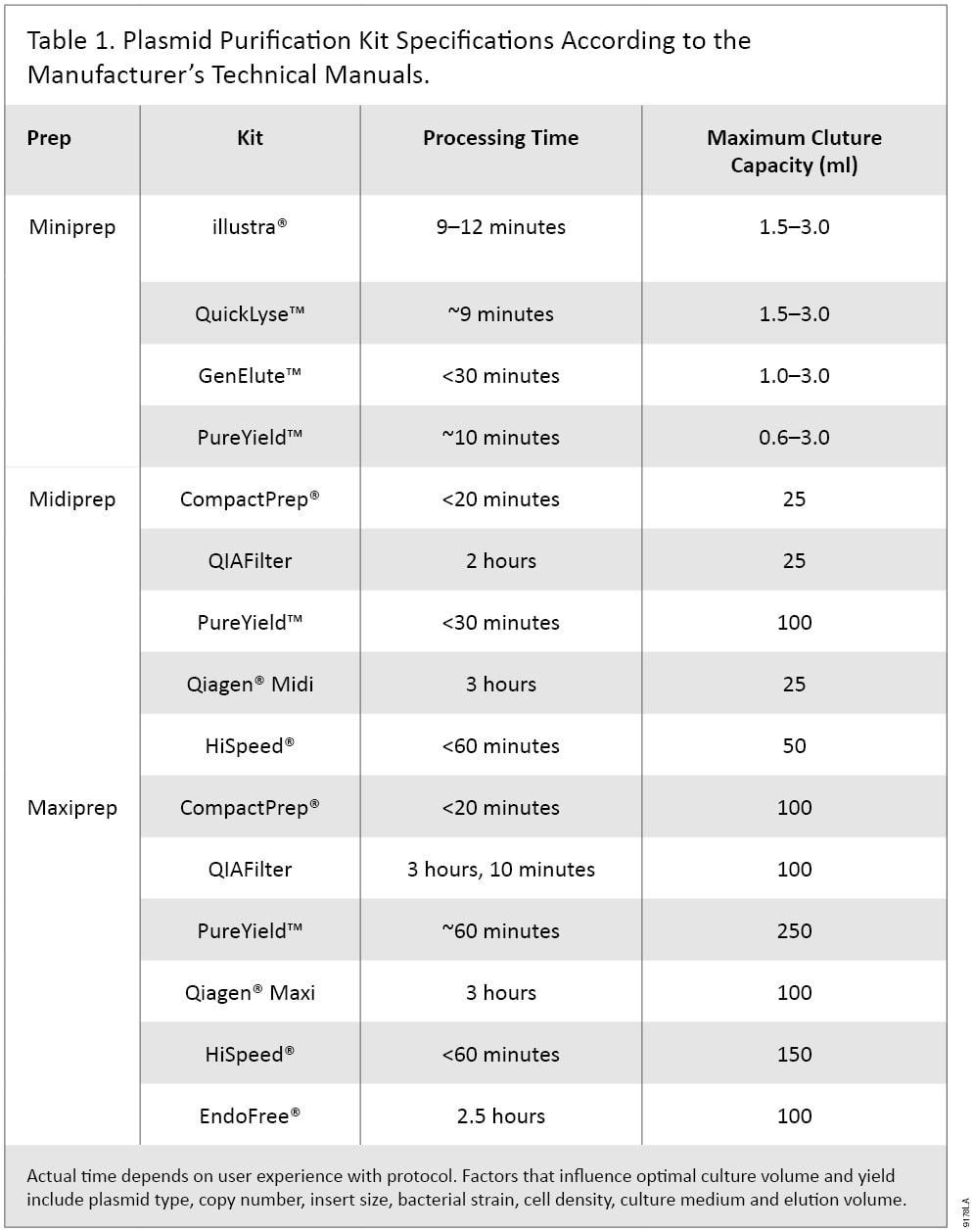 The PureYield™ Plasmid Miniprep System provides high-speed purification of high-quality plasmid DNA in 10 minutes or less. Plasmid DNA can be isolated directly from up to 0.6ml of bacterial culture or from pelleted cells from up to 3ml of cell culture. A Lysis/Neutralization dye is included to aid in complete mixing and ensure consistently high plasmid yields and concentrations. An endotoxin removal wash improves performance in sensitive applications such as transfection and in vitro transcription/translation reactions.

Of the four kits tested, the Sigma GenElute™ and Promega PureYield™ Plasmid Miniprep kits resulted in the highest yields (Figure 1). All kits resulted in A260/A280 ratios >1.80, while only QuickLyse™ failed to give A230/A260 ratios >1.80. For QuickLyse™, the fast processing time (Table 1) came at the expense of yield and quality, as plasmid DNA from QuickLyse™ had the lowest yield and purity. The absence of an endotoxin removal wash is likely a contributing cause to the low purity obtained for QuickLyse™. Figure 1. Yield and purity measurements of plasmid DNA isolated from plasmid miniprep kits. The kit performance was evaluated by comparing the yield and purity of eluted DNA from equivalent culture aliquots. An overnight culture grown from a single colony of pF8-luc DNA in JM109 cells was used to inoculate 50ml of LB culture media containing ampicillin. OD measurements were made on the day of plasmid isolations. The culture was split into 4 replicates of 1.5ml cultures for each plasmid isolation kit. Data are the average of four preps. Average yield was calculated from absorbance at 260nm. Average purity was calculated by absorbance at 260nm/280nm and 260nm/230nm. 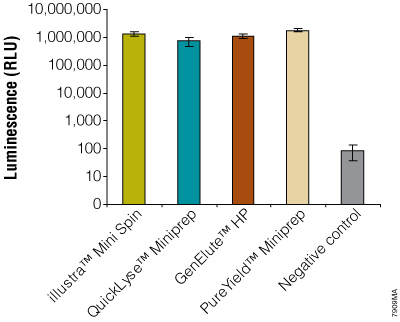 Figure 2. Performance of miniprep DNA in an in vitro transcription/translation reaction. Plasmid DNA (0.5µg) was used to perform a 25µl TnT® Quick Coupled Transcription/Translation reaction. Reactions were incubated at 30°C for 2 hours. Aliquots (2.5µl) of the reactions were diluted into 47.5µl of 1X PBS. An equal volume of ONE-Glo™ Assay Reagent was added and read after 5 minutes in a GloMax® Microplate Luminometer.

Reducing the time spent performing routine applications such as plasmid DNA purification allows researchers to spend additional time on the more difficult and challenging areas of their research. While miniprep kits such as the PureYield™ Plasmid Miniprep System offer the speed and purity that researchers desire, yields may not be sufficient for all downstream applications. Promega PureYield™ Plasmid Midiprep and Maxiprep systems allow for medium- and large-scale purification of highly pure plasmid DNA in as little as 30 and 60 minutes, respectively.

Lysate clearing is accomplished by high-speed centrifugation followed by the novel PureYield™ Clearing Column in a spin or vacuum format. The plasmid DNA is then bound to the PureYield™ Binding Column. An endotoxin removal wash is included, resulting in highly pure plasmid DNA yields suitable for downstream applications including transfection, cell-free expression, and other molecular biology applications. In addition, using the Eluator™ Vacuum Elution Device saves time by eliminating the need to transfer DNA, at the same time further increasing plasmid yields. The simple protocols eliminate time-consuming gravity-flow columns and post-elution alcohol precipitation, and in the case of the midiprep system, no high-speed centrifugation step is required. 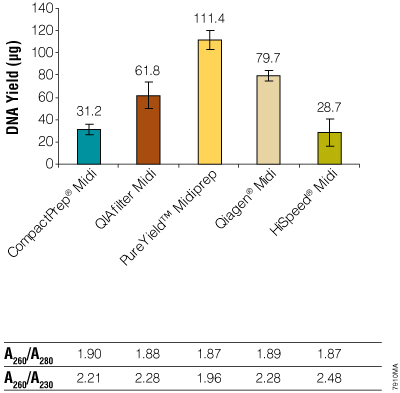 Figure 3. Yield and purity measurements of plasmid DNA isolated from PureYield™ and Qiagen® midiprep kits. Cultures of pFC8A-luc with an OD600 of 2.8–3.0 were split into 25ml aliquots. Data are the average of triplicate or quadruplicate (CompactPrep®, PureYield™ and HiSpeed®) 25ml preps. Average yield was calculated from absorbance at 260nm. Average purity was calculated by absorbance at 260nm/280nm and 260nm/230nm. 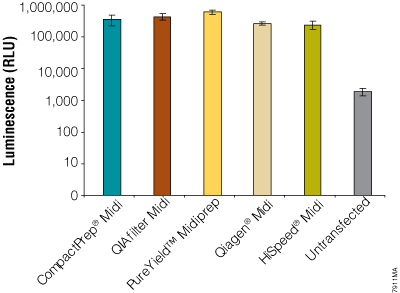 Figure 4. Average firefly luciferase activity in cells transfected with midiprep plasmid DNA. CHO cells (10,000 cells/well) were transfected in a 96-well plate with 0.2µg/well of plasmid DNA. TransFast™ Transfection Reagent was used at 1:1 lipid:DNA ratio in the absence of serum followed by assaying for luciferase activity using ONE-Glo™ Luciferase Assay System. All samples were performed in triplicate.

Of the six kits tested, PureYield™ System again gave the highest overall yield of plasmid DNA (Figure 5). The plasmid DNA isolated with PureYield™, CompactPrep® and Qiagen® Plasmid Maxi kits was of high quality according to A260/A280 and A260/A230 ratios calculated, whereas QIAfilter, HiSpeed®, and EndoFree® suffered from low A260/A230 ratios. Figure 5. Yield and purity measurements of plasmid DNA isolated from PureYield™ and Qiagen maxiprep kits. pGEM®-3Z Vector was grown in JM109 cells to an OD600 of 4.79. Three hundred microliters of culture was centrifuged at 6,000 x g, and the pelleted material was frozen. Frozen pellets were reconstituted with the appropriate kit buffer and then split into triplicate samples. All kits tested used one-third of each bacterial pellet made from the 300ml culture (or the equivalent of 100ml of culture). Triplicate plasmid preps were performed with each kit. Average yield was calculated from absorbance at 260nm. Average purity was calculated by absorbance at 260nm/280nm and 260nm/230nm.

In terms of time, the PureYield™ and CompactPrep® kits again were the quickest (Table 1). CompactPrep® advantages included no need for high-speed centrifugation steps (aside from a 1-minute elution spin on a benchtop microcentrifuge) and the inclusion of LyseBlue® dye to confirm full neutralization of the lysed sample. But as was the case with the midipreps, in terms of yield, the PureYield™ System held an advantage over CompactPrep®, with greater than a twofold increase in total plasmid yield. The HiSpeed® protocol was significantly faster but at the expense of DNA purity. Finally, long centrifuge and wash times resulted in significantly longer protocols, from 2.5 to >3 hours for the EndoFree®, Qiagen® Plasmid Maxi, and QIAfilter maxiprep kits. 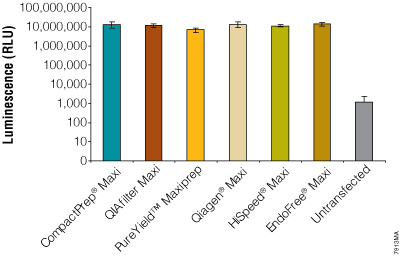 Figure 6. Average firefly luciferase activity in cells transfected with maxiprep plasmid DNA. Mouse 3T3 cells (10,000 cells/well) were transfected in a 96-well plate with 0.2µg/well of pGL3-Control plasmid DNA. TransFast™ Transfection Reagent was used at a 1:1 lipid:DNA ratio in the absence of serum; then luciferase activity was assayed using the ONE-Glo™ System. All samples were performed in triplicate.

The PureYield™ family of plasmid DNA purification systems offers extremely rapid purification of plasmid DNA without sacrificing quality and purity. In terms of speed, yield, and purity, PureYield™ Systems outperform the competitor kits in the majority of these areas. The high-quality plasmid DNA is suitable for downstream assays, including demanding applications such as cloning, transfection, cell-free transcription/translation reactions, and DNA sequencing.