We demonstrate the use of a non-activity-based cytotoxicity probe, CellTox™ Green Dye, which can be added at the beginning of an experiment and employed in real time for the kinetic determination of cytotoxicity. We used the HP D300 Digital Dispenser, available from Tecan, for noncontact dispensing of test compound and the Tecan Infinite® M200 PRO with Gas Control Module (GCM™) for kinetic measurement of cytotoxicity in HepG2 cells over 72 hours.

In vitro cytotoxicity is largely influenced by test article concentration and the exposure period with cells. The diversity of kinetic response can complicate conventional cytotoxicity endpoint assay determinations because most assay reagents are formulated to measure enzymatic biomarkers that are susceptible to time-dependent decay. Using DNA binding as an indicator of cytotoxicity mitigates this issue, providing a robust method of detection for time course experiments. CellTox™ Green Dye is an asymmetric cyanine dye that measures cytotoxicity as a result of compromised cellular membrane integrity (Figure 1). When the dye binds to DNA, green fluorescence is enhanced. The signal intensity is directly correlated to the degree of change in the membrane integrity. The dye can be added at the time of cell plating or compound treatment and the fluorescence monitored kinetically over a period of up to 72 hours. Alternatively, the dye can be added at the conclusion of compound treatment and an endpoint measurement taken. 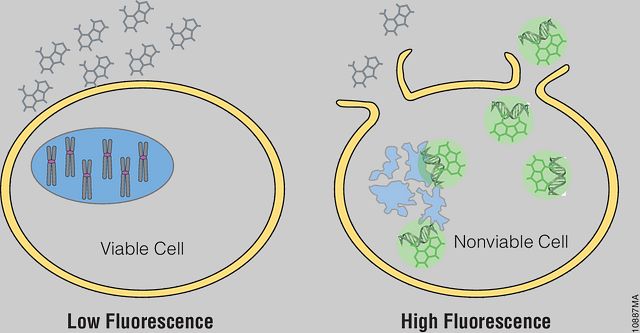 Using kinetic monitoring of cytotoxicity with CellTox™ Green Dye you can identify an exact point in time when changes in membrane integrity begin. This can be beneficial for mode-of-action studies where additional biomarkers, such as caspase, may be of interest.

The majority of microplate readers lack the ability to control both temperature and gas, like carbon dioxide, needed to sustain cell cultures over the course of a long-term kinetic experiment. As a result, kinetic readings are accomplished by periodically shuttling the assay plate between the cell culture incubator and the microplate reader. The labor constraints of this process can limit the number of time points acquired. These plate manipulations also can induce cell stress if the plate is left for too long at room temperature. To facilitate control of the experimental variations caused by temperature and gas in real-time experiments, Tecan developed the Infinite® M200 PRO with Gas Control Module (GCM™, Figure 2). This multimode reader is equipped with Quad4 monochromators™ for finely tuned wavelength selection. The onboard temperature control allows precise temperature adjustment up to 42°C. Linear and orbital shaking help ensure homogeneous well contents before each read. Most importantly, the Gas Control Module enables simultaneous adjustment of CO2 and O2 partial pressures by injecting CO2 and N2 into the detection chamber from attached tanks holding CO2 and N2, respectively. The high sensitivity and precision offered by the system allows for automatic compensations for variations in the atmospheric partial pressure of CO2, using the module’s unique altitude correction function, which is accessed via an intuitive user interface. Rapid detection of changes in gas pressure or flow will indicate if the target concentration will not be reached or deviates significantly during incubation, at which point both audible and visible warnings alert the user. 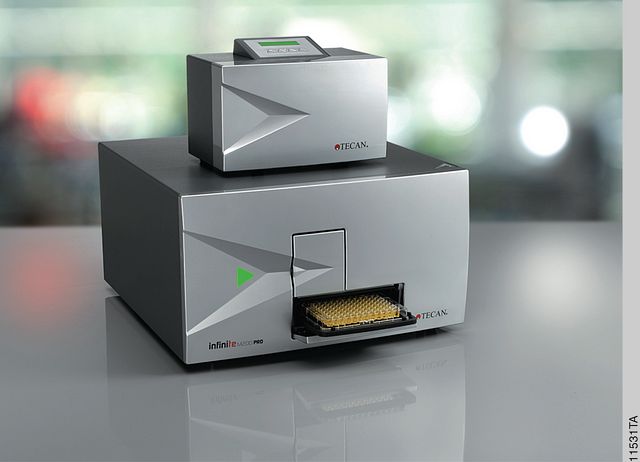 We evaluated real-time cytotoxicity measurements with CellTox™ Green Dye on the Infinite® M200 PRO with GCM™ using a frozen instant HepG2 cell model and a selection of cytotoxic compounds from Sigma. We used the non-contact Tecan HP D300 Digital Dispenser to deliver compounds to the assay plate (Corning Costar® Cat.# 3603). After placing the plate into the reader, we measured the fluorescence intensity over the course of 72 hours.

Cell Preparation: Frozen instant HepG2 cells were thawed in a 37°C water bath for 2 minutes and gently mixed with a pipette. Viability was assessed with trypan blue, and a cell suspension was created at 5 × 104 cells/ml in EMEM + 10% FBS. CellTox™ Green Dye was added to the suspension at a final concentration of 1X as described in Technical Manual #TM375. Two hundred microliters of cell suspension was pipetted in to the wells of a black-walled, clear bottom assay plate. One hundred and fifty microliters of 1X PBS was added to the inter-well spaces of the assay plate to provide additional humidity for the time-course experiment. The plate was equilibrated at 37°C/5% CO2 for 4 hours prior to being placed into the reader.

Compound Preparation and Delivery: Stocks of 10mM nocodazole and staurosporine and 20mM terfenadine were created with 100% DMSO. The compounds and DMSO controls were pipetted to the HP D300 T8 cassette. The stock compounds were dispensed in volumes ranging from 200pl–1µl, depending upon the desired starting concentration and the stock compound concentration. Serial ten-fold dilutions of compound were achieved within the experimental wells. DMSO was backfilled to all wells, resulting in a final DMSO content of 0.1–0.5%. The plate was mixed on an orbital shaker for 2 minutes and placed inside of the prewarmed, gas-equilibrated reader.

To determine the cytotoxic effects of the compounds we tested, we plotted the raw fluorescence units against time. The results of the assay are shown in Figure 3. Terfenadine exhibits rapid-onset toxicity at high concentrations by a mechanism that is both dose- and time-dependent. Nocodazole alters microtubule assembly necessary for cell division, leading to cytotoxicity. At the concentrations we tested, cytotoxicity of nocodazole began after 24 hours of exposure, and all concentrations showed equal potency. Staurosporine is a pan-kinase inhibitor and induces apoptosis in a time- and dose-dependent manner. Secondary necrosis of the treated cells resulted in changes to membrane integrity, which was observed after a prolonged exposure.

Raw fluorescence units were recorded and plotted versus exposure time for each of the compound and DMSO control wells. Panel A. Terfenadine exhibits rapid onset toxicity at high concentrations by a mechanism that is both time and dose-dependent. Panel B. Nocodazole shows cytotoxicity after 24 hours of exposure, with all concentrations tested showing equal potency. Panel C.  Staurosporine shows a time-delayed onset of cytotoxicity in a dose-dependent manner.

Although we did observe some evaporation in the perimeter wells of the assay plate, this is common for long-term experiments, and is most likely due to the lack of humidity control within the instrument. The inner wells of the assay plate remained intact and produced the expected results presented here. If evaporation is a concern, using an alternative plate such as the Nunc Edge plate, which provides a separate water reservoir on the edge of the plate, could reduce or eliminate this problem.

The toxicity profiles we observed were in agreement with the known mechanism of action for each of the compounds tested. We found the Tecan Infinite® M200 PRO with GCM™ easy to program, and the instrument equilibrated to the assay condition set points in a timely manner. The instrument also allowed us to continually monitor cytotoxicity over the course of 72 hours without the need for manual intervention. There was no apparent negative impact on cell health from performing the assay over 72 hours, as indicated by the low fluorescence in the vehicle control wells.

Figure 4. This work was done in collaboration with Tecan Group, Ltd.