We demonstrate the use of the pro-fluorescent DNA-binding probe CellTox™ Green in an image-based kinetic application for monitoring the dose-dependent progression of cytotoxicity. We treated HeLa cells with ionomycin in the presence of CellTox™ Green and used the Essen Bioscience IncuCyte™ Live Content Imaging System for image acquisition over a 72-hour exposure period. Image processing algorithms were used to quantify green fluorescent objects (dead cells). The highest concentrations of ionomycin produced an increase in fluorescence within the first four hours of treatment associated with an increase in the number of dead cells. Phase-contrast images confirmed cell morphology changes and loss of membrane integrity due to treatment during this short term exposure. Lower doses of ionomycin exhibited delayed but dose-dependent increases in cytotoxicity.

Promega has designed and developed the asymmetric cyanine dye, CellTox™ Green, which is useful for measuring cytotoxicity as a result of compromised cellular membrane integrity (Figure 1). Green fluorescence is substantially enhanced upon binding of the dye to DNA, resulting in a direct correlation between signal intensity and the degree of membrane integrity changes in a population of cells. The probe can be conveniently introduced into the cell culture at the time of cell plating or compound treatment and fluorescence monitored kinetically over time. Previous reports have shown the application of CellTox™ Green for kinetic experiments using a gas-controlled microplate reader (1) .  We expand upon this kinetic cytotoxicity application by showing the use of this versatile dye for image-based cytotoxicity measurements using the Essen Bioscience IncuCyte™ Live Content Imaging System.

The IncuCyte™ platform consists of a microscope with a camera that fits within a standard cell culture incubator. Environmental control for temperature, humidity, and carbon dioxide is provided by the cell culture incubator, eliminating the need for an external environmental chamber commonly used with other bench top imaging systems. The controlled environment of the cell culture incubator is particularly beneficial for kinetic imaging, allowing experiments to be conducted over long periods of time with no user intervention or unnecessary perturbation of cells. The IncuCyte™ imager supports a wide variety of vessels, from cell culture flasks up to 384-well microplates, offering flexibility for a number of applications including basic monitoring of cell culture confluence, or tracking effects of drug treatment. Up to six microplates can be placed inside the drawer of the IncuCyte™ imager and imaged over time. High definition imaging capabilities are unencumbered by fluid meniscus aberrations, enhancing phase-contrast acquisition in microplate formats. An external controller is used to operate the IncuCyte™ imager. The user friendly software interface enables rapid programming of image acquisition schedules, and simple export of data and graphs.
The first generation IncuCyte™ FLR model was used for this study.  The instrument was equipped with a 10X objective for phase-contrast and fluorescence detection in the green spectrum. The new IncuCyte™ ZOOM model, shown in Figure 2, also is compatible with the CellTox™ Green Dye and includes user-changeable 4X and 20X objectives, and the added capability to detect fluorescence in the red range of the spectrum. Please see the Essen protocol (2) for more information on the use of CellTox™ Green Dye with the IncuCyte™ Zoom imager. 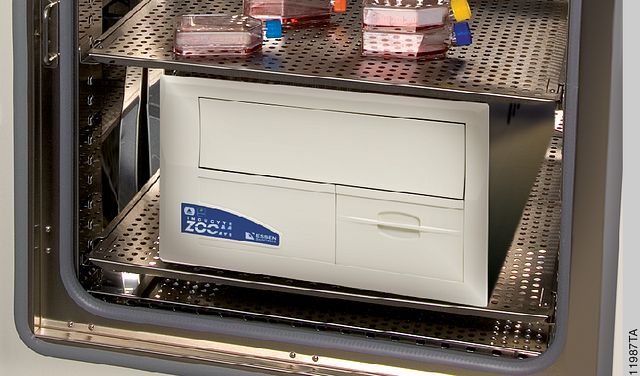 Cell Preparation:  HeLa cells were trypsinized and centrifuged at 500 x g for 5 minutes, counted and resuspended to 1.0 x 105 cells/mL in DMEM + 10% FBS. CellTox™ Green Dye was added to the cell suspension at 2X concentration (1:500 dilution of dye).  A volume of 50µl of cells was dispensed to each well of the assay plate. The plate was placed into the IncuCyte™ imager and cells were allowed to equilibrate and attach for four hours prior to adding compound.

Compound Preparation and Delivery:  A stock of 20mM ionomycin was created with 100% DMSO.  A 200µM (2X) working concentration was prepared in DMEM + 10% FBS.  Serial tenfold dilutions were prepared in medium containing 0.5% DMSO. Fifty microliters of the diluted compound was dispensed in triplicate to the plated cells, creating a final concentration range of 100µM to 100nM. Wells containing 0.5% DMSO were included as vehicle control wells. After addition of diluted test article, the effective concentration of the CellTox™ Green Dye was at 1X concentration in the well, or 1:1000 dilution of the stock concentration. The plate was placed on an orbital plate shaker for 30 seconds and returned to the IncuCyte™ drawer to begin the imaging time course.

The calcium ionophore, ionomycin, mediates its acute, high-dose cytotoxic effects by causing profound calcium channel dysregulation. This dysregulation culminates in an osmotic shock that damages cellular membranes, allowing the CellTox™ Green Dye to enter the cell and bind to DNA in the nucleus. Lesser concentrations of ionomycin can produce cytotoxicity associated with prolonged cell stress and apoptosis.

The images in Figure 3, and coinciding object counting (dead cell) analysis in Figure 4, demonstrate the cytotoxic potential of ionomycin. A 100µM concentration of ionomycin produced pronounced morphological changes and an increase in green fluorescence after only four hours of treatment. High concentrations of ionomycin typically induce maximal cell death within 10–20 hours post-treatment. Images acquired at 24 hours show all cells in the field of view have lost membrane integrity as demonstrated by the accumulation of green fluorescence in the nucleus.

Images and object counting data for 1µM ionomycin show a delayed, time-dependent increase in cytotoxicity. Membrane integrity changes begin at approximately 34 hours post-treatment and increase as time progresses. The 48-hour images confirm the emergence of cytotoxicity, with the number of dead cells doubling by 72 hours.

Vehicle control wells, as well as the lowest ionomycin concentration tested (100nM), show a slight increase in staining over the course of time. This finding suggests that 100nM ionomycin exhibits no specific cytotoxic effect as cells continue to grow in the medium. 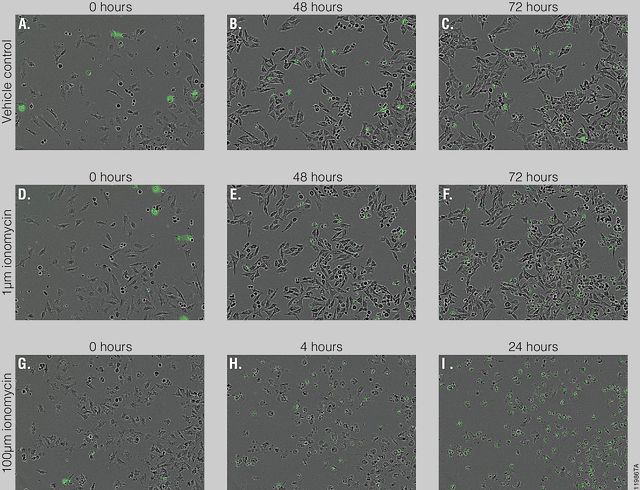 Images have been cropped and magnified for easier viewing of cells. Maximum cytotoxicity is achieved with 100µM concentration of ionomycin during the first 24 hours of treatment. Morphology changes are observed, and the emergence of green fluorescent cells indicates membrane integrity changes as the time course progresses. A concentration of 1µM ionomycin exhibits cytotoxic effects after 34 hours of treatment that are visually confirmed in the 48-hour image.

Figure 4. Object counting algorithms were used to quantify the dead cells present in each well.

Shown here is a representative graph exported from the IncuCyte™ software. Fluorescent objects (dead cells) are tracked over time for each of the ionomycin and vehicle controls tested. At 100µM and 10µM ionomycin shows rapid onset of cytotoxicity within 6–12 hours of treatment.  At a concentration of 1µM, ionomycin shows a delayed, time-dependent onset of cytotoxicity, while the 100nM concentration does not exhibit cytotoxic changes greater than the vehicle control.  Each point represents n = 3 replicates.

The CellTox™ Green Dye binds DNA of membrane compromised cells. The dye can be conveniently added with cells at plating or simultaneously with compound treatment and used for kinetic monitoring of cytotoxicity over time. The IncuCyte™ FLR platform acquired HD phase, and green fluorescent images that enabled visual verification of membrane integrity changes with accumulation of CellTox™ Green  Dye in the nucleus of dead cells. Cell counting algorithms allowed for quantification of the magnitude of cytotoxicity within the well. The imager-within-an-incubator concept worked well for performing the kinetic cytotoxicity study presented here. Aside from providing a shelf for the instrument within a standard cell culture incubator, no additional chamber or other means of environmental control was required for performing this live content imaging experiment.   The ability to image up to six microplates at one time offered throughput advantages over other systems that allow for only one plate to be imaged or read at a time. The intuitive user interface of the IncuCyte™ platform made it easy to establish an imaging schedule and analyze data in real-time over the course of several days. The automatic image processing of the IncuCyte™ platform used with the direct addition of CellTox™ Green Dye to cells allows users to easily set up and accurately quantify kinetic cytotoxicity assays.

CellTox is a trademark of Promega Corporation.

IncuCyte is a trademark of Essen Bioscience, Inc.