Glycosyltransferases are enzymes that catalyze the transfer of ‘activated’ monosaccharides, usually a nucleoside diphosphate sugar, to a substrate protein or existing glycoconjugate, followed by the release of the nucleoside diphosphate product (Figure 1). The UDP-Glo™ Glycosyltransferase Assay (Cat.# V6961) is a simple and highly sensitive bioluminescent assay for the detection of glycosyltransferase activity that relies on the detection of released uridine diphosphate (UDP) upon transfer of the carbohydrate to the target molecule   (1) . However, ultrapure sugar-nucleotide donors are required to minimize background levels of signal caused by free nucleotide diphosphates that may be present in many commercial preparations of the sugar nucleotide. 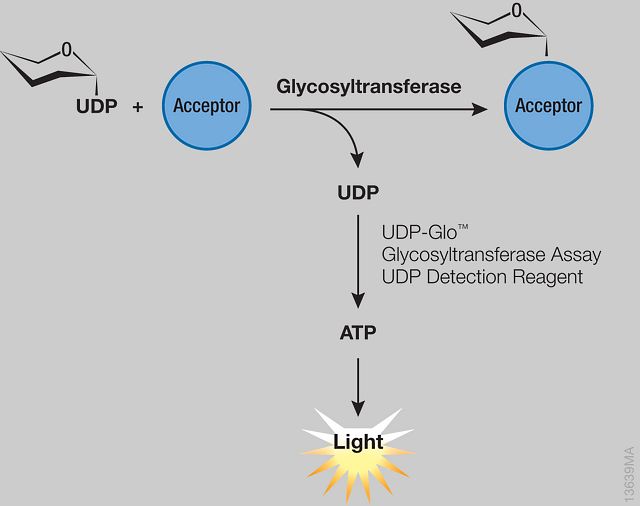 Figure 1. Glycosylation is mediated by enzymes called glycosyltransferases. Glycosyltransferases catalyze the transfer of an ‘activated’ monosaccharide, usually a nucleoside diphosphate sugar, such as uridine diphosphate (UDP), to an acceptor molecule (e.g., peptide, protein or lipid) or existing oligosaccharide. The UDP-Glo™ Glycosyltransferase Assay (Cat.# V6961) detects released UDP upon transfer of the carbohydrate to the acceptor molecule, converting UDP to ATP and then light in a luciferase reaction, which can be measured by a luminometer. Using a standard curve, luminescence is directly proportional to UDP concentration, and thus, activity of the glycosyltransferase being investigated.

We wanted to use the UDP-Glo™ Assay to study the xylosyltransferase activity of the glycosyltransferase LARGE (3) ; however, ultrapure UDP-Xylose is not available. The principal behind minimizing background levels is removal of free UDP (or ATP) that may be present in sugar-nucleotide preparations (1)   (4) . To accomplish this, we incubated UDP-Xylose with Calf Intestinal Alkaline Phosphatase (CIAP, Cat.# M1821) to degrade any free, contaminating nucleotide diphosphates (Figure 2). Since the downstream UDP-Glo™ Glycosyltransferase Assay converts free UDP to ATP, then ATP to light (Figure 1), it is imperative to remove all of the CIAP from the sugar-nucleotide preparation, as CIAP will cleave ATP and interfere with detection of luminescence. Therefore, following incubation of UDP-Xylose with CIAP, we used a 10kDa microcentrifuge concentrator (EMD Millipore) to filter out CIAP (~140–160kDa dimer). Using the following protocol, we were able to reproducibly ‘cleanup’ UDP-Xylose (and conceivably any sugar-nucleotide donor) by degrading free UDP to uridine to use it in the UDP-Glo™ Glycosyltransferase Assay with low, comparable background relative light unit (RLU) levels compared to ultra-pure varieties (Figure 3). 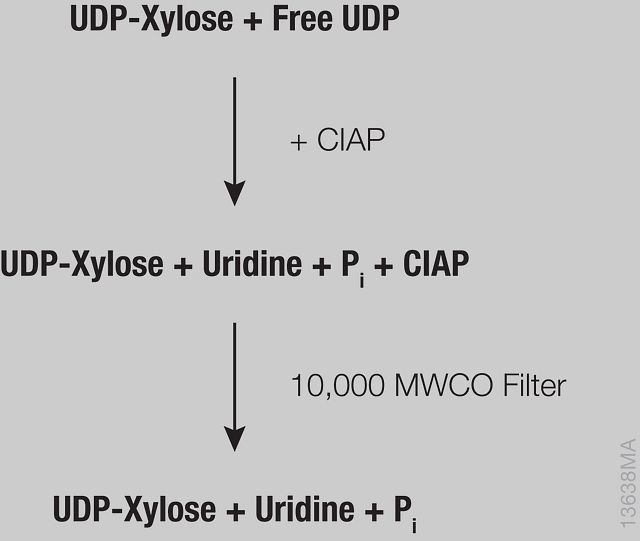 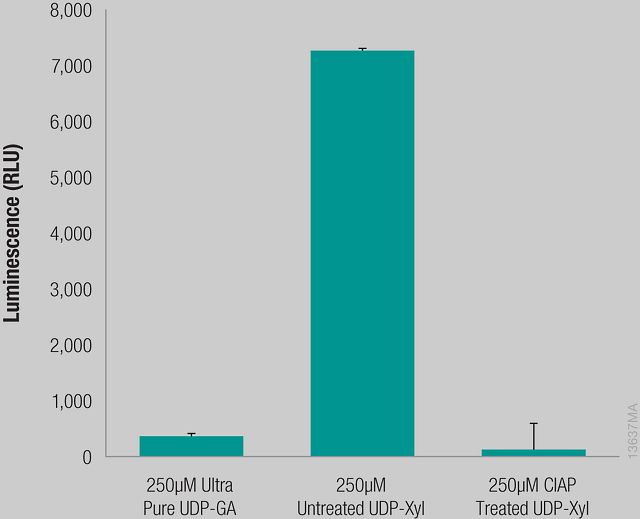 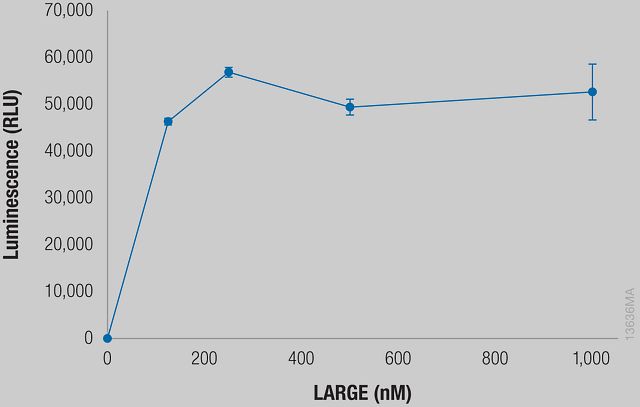 Here, we report the use of CIAP to hydrolyze contaminating nucleotide diphosphates in sugar-nucleotide preparations for use in the UDP-Glo™ Glycosyltransferase Assay when ultrapure sugar-nucleotide varieties are unavailable. Although untested in our laboratory, this principle may be extended to the GDP-Glo™ and UMP/CMP-Glo™ Glycosyltransferase Assays (currently in development; Contact Michael Curtin, Product Manager, for details). In addition to soluble CIAP, we have tested the feasibility of using CIAP conjugated to agarose beads (Sigma Insoluble Enzymes) to aid in removing the phosphatase. However 0.2µm filtration of the CIAP-conjugated beads alone was not sufficient to remove the CIAP, presumably due to residual amounts of unconjugated CIAP in the preparation. Thus filtering using MW cut-off filters is suggested. We use unconjugated, soluble CIAP in our protocol presented above. In conclusion, we expect that this methodology will be particularly useful in applications where ultrapure-grade standard and synthesized unnatural sugar-nucleotide donors are desired to be assayed using the bioluminescent glycosyltransferase assays.