The expression of recombinant polyhistidine-tagged proteins in mammalian cells, and their subsequent purification, is becoming more and more common in research laboratories investigating specific protein structure and function. This article describes the successful expression and purification of two polyhistidine-tagged proteins in a mammalian cell line using the MagneHis™ Protein Purification System.

Aliquots of selected cells (2 × 106/ml) from each transfection (including mock-transfected cells) were lysed using 100µl FastBreak™ Cell Lysis Reagent, 10X (Cat.# V8571), with 5µl RQ1 DNase (Cat.# M6101) for 15 minutes at room temperature with shaking. MagneHis™ Ni-Particles (20µl) were then added, and the polyhistidine-tagged proteins were purified as described in Technical Manual #TM060(1). An aliquot of each purified sample (13µl) was then separated on a 4–12% Bis-Tris PAGE gel and transferred to Hybond®-C-supported nitrocellulose. The blot was developed using Anti-Penta-His primary antibody (Qiagen), anti-mouse HRP-conjugated secondary antibody, and chemiluminescent detection reagents. The blot was exposed to autoradiography film for 5 minutes. 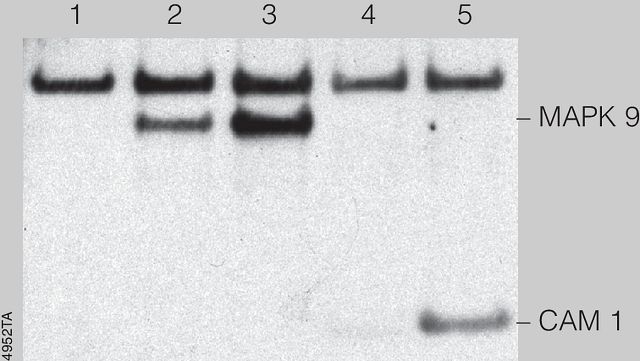 The MagZ™ Protein Purification System (Cat.#V8830) can also be used for the purification of polyhistidine-tagged proteins from mammalian cells using FastBreak™ Cell Lysis Reagent, but the ~60kDa background protein copurifies with this system as well (data not shown). For the MagZ™ system, the purification protocol is similar to the MagneHis™ Protein Purification System, except that 40µl MagZ™ Binding Particles are used and the washing steps are performed using the MagZ™ Binding/Wash Buffer.