Animal models are often used to study the genetic and environmental causes of disease and as well as to screen potential drugs that can be used to treat these diseases. Mouse models can be genetically engineered to contain a particular genotype; therefore, accurate genotyping of these animal models is necessary. PCR is a standard procedure used for genotyping due to the ease and speed of the technique. The DNA template is often purified from crude prepartions from mouse tails, toe clippings and ear punches. However, DNA polymerases used for amplification can be affected by inhibitors copurifying with the DNA template. These inhibitors can lead to allelic dropout and errors in genotyping that can result in increased time and cost associated with the studies. In this report, Taq DNA polymerases are compared in mouse genotyping assays to demonstrate the advantages of using Promega GoTaq® Hot Start Polymerase (Cat.# M5001) for this application.

We challenged customers to compare their current Taq DNA polymerase (hot start or no) with GoTaq® Hot Start Polymerase by asking them to submit gel electrophoresis images of the PCR products and describe their mouse genotyping assays results.

Figure 1 shows the results of a mouse genotyping assay comparing GoTaq® Hot Start Polymerase (Panel A) to a competitor Taq DNA polymerase (Panel B). Ten samples were amplified using each polymerase along with a positive control for the transgenic mice. Using the competitor Taq DNA polymerase, 2 of 10 samples failed to amplify, while the others amplified with varying degrees of efficiency. With GoTaq® Hot Start Polymerase, the customer observed a more robust amplification in all samples tested with no allelic dropout.

Figure 2 shows the results of a genotyping assay of a heterozygous mouse comparing GoTaq® Hot Start Polymerase to a competitor Taq DNA polymerase. Decreasing concentrations of MgCl2 were tested in order to optimize the amplification reaction conditions. The expected sizes of the amplified fragments for the heterozygote are 1kb and 350bp. Using the competitor Taq DNA polymerase, the 1kb fragments of the heterozygous mouse are barely visible with each concentration of MgCl2 (Lanes 2–4), which could lead to a false determination of the mouse genotype. On the other hand, GoTaq® Hot Start Polymerase with all concentrations of MgCl2 gave robust amplification with no allelic dropout (Lanes 6–8), resulting in a clear-cut determination of the mouse genotype. 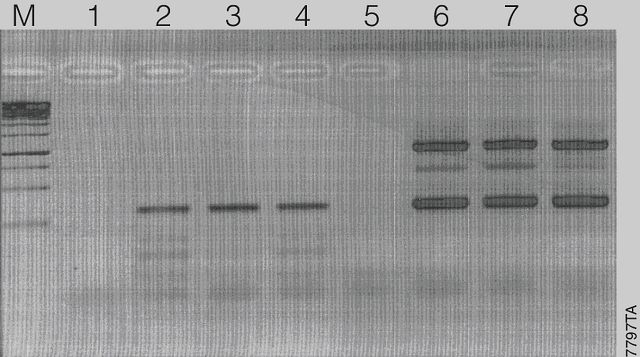 Figure 3 shows the results of a mouse genotyping assay with the NBS gene comparing GoTaq® Hot Start Polymerase (Panel A) to two non-hot start DNA polymerases (Panels B and C). The NBS gene is a difficult target to amplify for mouse genotyping. DNA was purified from mouse tails using two different methods—an automated purification method (Maxwell® 16, lanes 1 and 2) and a manual purification method (Wizard® SV Genomic DNA Purification System [Cat.# A2360], lanes 3 and 4). Heterozygous (lane 6) and homozygous controls (lanes 5 and 7) are shown. The polymerase used in Panel B resulted in reduced amplification of the control DNAs and failed to amplify one of the sample DNAs. The polymerase used in Panel C showed very poor results, with little to no amplified product obtained with all of the samples. In contrast, GoTaq® Hot Start Polymerase showed significant improvements in amplification of the NBS gene over the two non-hot start polymerases, with strong amplification and no allelic dropout.