Here we demonstrate a magnetic 3D bioprinting method for rapidly and reproducibly printing three-dimensional (3D) spheroids in high-throughput formats. We show the utility of these spheroids for cell viability testing using the CellTiter-Glo® and RealTime-Glo™ Cell Viability Assays.

The main flaw of traditional cell culture methods is the use of two-dimensional (2D) monolayers of cells on glass or plastic surfaces, which poorly mimic native tissue environments. These models fail to accurately represent the tissue stiffness, biochemical concentration gradients, extracellular matrix (ECM), and cell-cell and cell-ECM interactions that define native tissue. To avoid these limitations, researchers have turned to three-dimensional (3D) cell culture platforms, one of which is 3D bioprinting.

The core principle behind magnetic 3D bioprinting is the magnetization of cells with the NanoShuttle™ Bioprinting Kit (Nano3D Biosciences, Houston, TX), a biocompatible nanoparticle assembly consisting of gold nanoparticles, iron oxide, and poly-L-lysine (PLL) (1) (2) . The NanoShuttle™ method magnetizes cells by electrostatically attaching to the cell membranes via PLL. The nanoparticles have no effect on cell viability or function, and are released from the cells after 7-8 days (1) .  Magnetized cells can then be trypsinized and resuspended in media, then rapidly directed and aggregated into spheroids using magnetic forces (Figure 1). Once aggregated, the cells interact to form a larger structure.

Figure 1. Magnetic 3D bioprinting process. Cells are magnetized overnight with NanoShuttle™ (NS), resuspended in media, and distributed into a multiwell plate. The cells are printed into spheroids by placing the multiwell plate on top of a magnetic drive, aggregating cells at the bottom of the well within a few hours to form spheroids.

Magnetic 3D bioprinting is a rapid and easy-to-use method that offers many advantages over other 3D cell culture platforms. The use of magnetic forces greatly accelerates spheroid aggregation, reducing the time to form spheroids to a few hours. As NanoShuttle™ works on a cellular level, small numbers of cells can be printed with high reproducibility. The spheroids are easy to hold down with magnetic forces while adding or removing liquids, and the magnetic forces allow creation of complex co-culture models with fine spatial organization (3) (4) (5). Finally, magnetic 3D bioprinting requires just NanoShuttle™ and magnets, making it easy to incorporate into existing cell culture workflows.

How to assay spheroids in culture is a continuing challenge. 3D cultures are dense in cells and ECM, and thus fluorescent signals can be of limited use (6) . Furthermore, 3D cell cultures can be delicate, and it can be difficult to add or remove solutions without disrupting spheroids. We tested two luminescent cell viability assays—CellTiter-Glo® and RealTime-Glo™ —to evaluate their performance with bioprinted 3D cultures. The CellTiter-Glo® Assay is an endpoint viability assay that quantifies the amount of ATP in metabolically active cells. Cells are lysed and luminescence is read from the media. The RealTime-Glo™ Assay is a non-lytic assay that allows real-time tracking of viability continuously during culture. In the RealTime-Glo™ Assay, a cell-permeant prosubstrate is reduced to a NanoLuc® luciferase substrate by viable cells. The NanoLuc® substrate diffuses out into the culture medium, where it is converted to a luminescent signal by NanoLuc® luciferase. The cells remain alive in the presence of the assay reagent and constantly produce luminescent signal for ~ 72 hours. In both of these assays, viability is measured with single additive steps, avoiding excessive handling issues with delicate spheroid cultures.

Magnetic 3D Bioprinting: At 70-80% confluence, NanoShuttle™ (Nano3D Biosciences) was added to cells (1 µl/10,000 cells) and incubated overnight. The next day, the magnetized cells were enzymatically detached, counted, and resuspended in media. At the same time, a cell-repellent 384-well plate was placed on top of a 384-well spheroid drive (Nano3D Biosciences; Figure 2). The cells were distributed into the 384-well plate at concentrations of 50, 200, and 2,000 cells/well (50 µl/well), where they were instantly aggregated into spheroids. Spheroids were left to form on the magnet for 1 hour, after which time the plate was removed to culture in an incubator.

CellTiter-Glo® Cell Viability Assay: At 72 hours, media was exchanged with 50 µl of  a 1:1 solution of media and CellTiter-Glo® Reagent. A 384-well spheroid drive was used to hold down spheroids while adding the solution, maintaining spheroid integrity. After the CellTiter-Glo® Reagent was added, the 384-well plate was removed from the spheroid drive and luminescence read on a luminometer (Synergy 4, Biotek, Winooski, VT). We also studied the effect of acetaminophen (Sigma-Aldrich, St. Louis, MO) on viability. Varying amounts of acetaminophen were added to HepG2 spheroids (2,000 cells/spheroid) and incubated for 72 hours. At 72 hours, the CellTiter-Glo® Assay was performed.

RealTime-Glo® MT Cell Viability Assay: Immediately after printing spheroids, the media was exchanged with  50 µl of media and 2X RealTime-Glo® Reagent at a 1:1 ratio. A spheroid drive was used to hold down spheroids while adding the solution, maintaining the spheroid integrity. After addition of the reagent, the 384-well plate was removed from the spheroid drive and left to culture in an incubator. Luminescence was measured at specified time points up to 72 hours using a luminometer (Synergy 4).

Live/Dead Staining: After 72 hours, spheroids were stained to detect viable cells using a live/dead staining assay (Biotium, Hayward, CA) to confirm the results of the CellTiter-Glo® and RealTime-Glo™ Assays. Media was replaced with a solution containing 2 µM calcein-AM and 4 µM ethidium homodimer-1. After a 10-minute incubation, the spheroids were imaged under a fluorescence microscope. 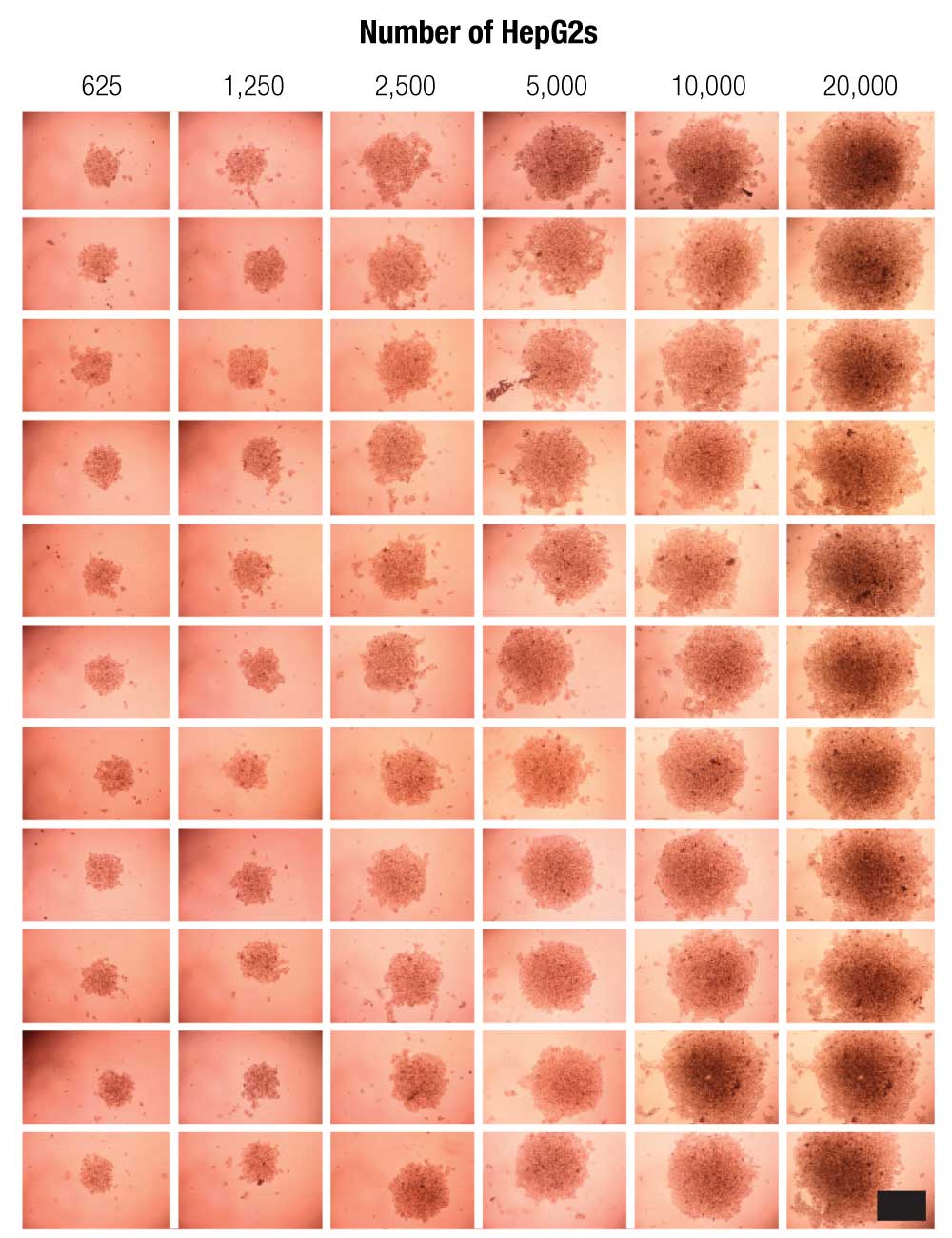 The size of the magnet, and thus the magnetic field, is the key determining factor of spheroid shape and size. The magnetic field is consistent from well-to-well, and spheroid size is reproducible. The CellTiter-Glo® results show that viability was linearly correlated to cell number, demonstrating that the spheroids are viable and that their viability can be measured. These results also showed that CellTiter-Glo® can effectively read viability in 3D cell cultures, a difficult challenge for reagent-based assays that depend on diffusion through a dense structure. Live/dead staining confirmed spheroid viability assay results (Figure 5).

To assess the ability to detect toxicity in 3D cultures, HepG2 spheroids were exposed to acetaminophen for 72 hours and cell viability assayed using the CellTiter-Glo® Reagent. Acetaminophen had a significant effect on viability (Figure 6; p < 0.001). Previous reports of viability in HepG2 spheroids show a similar effect (IC50 = 40 mM) (7) . 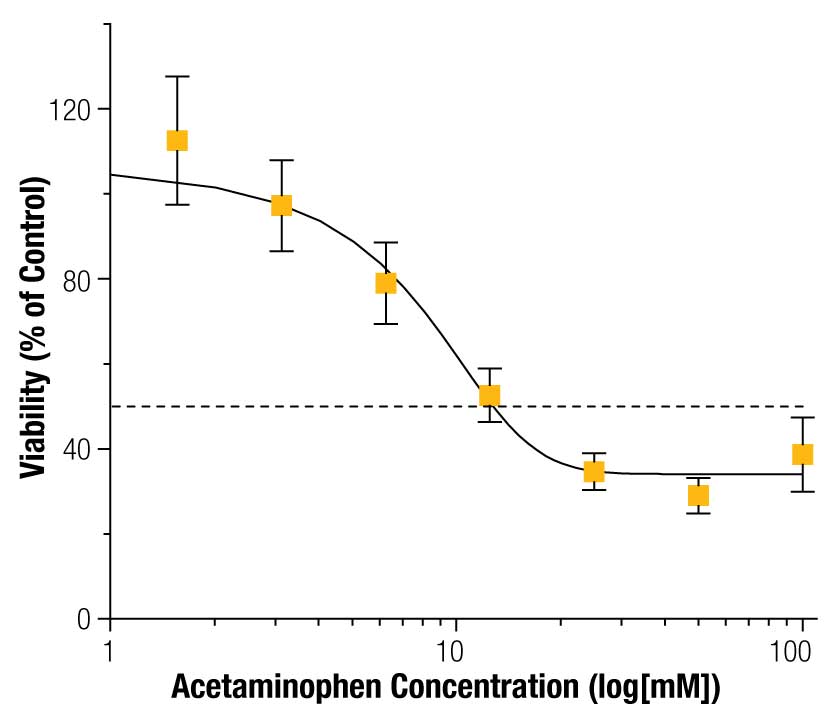 Next, we tested the ability of the RealTime-Glo™ Assay to measure viability of magnetically 3D bioprinted spheroids containing PC3 prostate cancer cells. PC3 cells were successfully printed into spheroids of either 50, 200, or 2,000 cells/spheroid. Measuring viability over 72 hours with the RealTime-Glo™ Reagent, we found that PC3 spheroids of all sizes grew over that time period (Figure 7), showing that they are viable. The spheroid growth rate was inversely proportional to cell number, with spheroids of 50 cells growing roughly 8X in cell number. This difference in growth rate may be attributed to the small size and consequently closer access to nutrients for cells in the center of these spheroids. No loss in luminescent signal was detected over the course of 72 hours, demonstrating the robustness of the RealTime-Glo™ Assay to measure viability in real time. Viability within the spheroid was confirmed using live/dead staining (Figure 8). Spheroids of all sizes stained positively for live cells, with minimal staining for dead cells. The success of live/dead staining -shows that it is possible to stain spheroids after the RealTime-Glo™ Assay for high-content experiments, and that the NanoShuttle™ particles did not interfere with fluorescence.

Figure 7. Real-time viability assessment of PC3 spheroids of various sizes. Growth (Panel A) and luminescence (Panel B) of PC3 spheroids at various starting sizes, measured over 72 hours with the RealTime-Glo™ Assay. Spheroids of all cell numbers grew over 72 hours, with spheroids of 50 cells growing at a faster rate than those containing larger numbers of cells.  Error bars represent standard deviation of n=24 samples.

These results demonstrate that magnetic 3D bioprinting can be used to print viable spheroids that grow over time, and that the viability of cells in these spheroids can be assessed continuously using the RealTime-Glo™ Assay.

Magnetic 3D bioprinting provides a fast and easy method for printing spheroids with high reproducibility. Difficulties in determining viability in 3D cell cultures, such as obstruction of fluorescence due to spheroid density, can be avoided with luminescent viability assays such as the CellTiter-Glo® and RealTime-Glo™ Assays. We demonstrated that these assays provide effective methods for assessing the viability of magnetically printed 3D spheroids. These cell viability assays, together with the 3D printing method, provide an ideal combination for high-throughput compound screening.

This work was supported by a National Institutes of Health (NIH) Small Business Innovation Research (SBIR) grant (R43ES024644) administered by the National Institute of Environmental Health Sciences (NIEHS), the Center for the Advancement of Science in Space (CASIS), and the State of Texas Emerging Technology Fund (TETF).