Here we introduce the NAD(P)/NAD(P)H-Glo™ Assays. These sensitive bioluminescent assays can be used to measure nicotinamide adenine dinucleotides in biochemical and cell-based applications.

Nicotinamide adenine dinucleotides are abundant soluble cofactors that undergo reversible oxidation and reduction in major metabolic pathways. They have become a point of focus in cancer research because, as metabolites, they can tie metabolic pathways to transcriptional control, epigenetics and cell signaling as cells switch from a normal metabolism to a cancer cell (proliferative) metabolism. In cells they are present in oxidized and reduced states as their unphosphorylated (NAD and NADH) and phosphorylated (NADP and NADPH) forms.  These dinucleotides work in pairs, and each pair has distinct functions.

NADP/NADPH is the least abundant of the nicotinamide adenine dinucleotide pairs. NADPH is associated with biosynthesis of macromolecules, providing the reducing power necessary for those synthetic reactions. Increased biosynthesis is characteristic of rapidly proliferating cells, such as cancer cells; because of this NADPH is considered a key molecule produced as a result of cancer metabolism. It also has a role in responding to the buildup of Reactive Oxygen Species (ROS) (1) .

NAD is most often associated with catabolic pathways (glycolysis and oxidative phosphorylation); however its role in the cell involves more than energy metabolism. NAD is an important substrate in several signaling pathways and is involved in the epigenetic control of gene expression (2) , (3) .  It is the substrate used for ADP ribosylation (3) and has roles in DNA repair (4) , (5) , signaling regulation and signaling (6) . The ratio of NAD/NADH influences the activity of many enzymes, especially the glycolytic enzymes (7) .

Monitoring the changes in intracellular levels of these important target-independent metabolites can allow us to better understand the link between altered metabolism and various diseases. Rapid and easy-to-use assays for key metabolites can facilitate these studies.

Traditional methods for monitoring the nicotinamide adenine dinucleotides have included direct absorbance or fluorescence, which are subject to background interference. Other assays use the dinucleotides in coupled enzyme reactions in an indirect method to increase sensitivity and produce an easily quantifiable molecule. More labor intensive analysis can involve liquid chromatography and mass spectrometry, which are generally not considered rapid and easy-to-use.

The inherent features of bioluminescence detection, such as no light source requirement for signal production, and no background fluorescence or interference with fluorescent compounds, make it an attractive approach for plate-based assays. Here we introduce three bioluminescent assays designed for selective measurement of total and individual nicotinamide adenine dinucleotides.

Measuring Dinucleotides with a Bioluminescent Assay

We have developed three assay formulations for measuring reduced (NADH and NADPH), unphosphorylated (NAD and NADH) and phosphorylated (NADP and NADPH) forms of dinucleotides that use a novel proluciferin substrate for the enzyme Reductase (8) in combination with NAD or NADP specific cycling enzymes (Figure 1).

The NAD(P)H-Glo™ Detection System is for measuring reduced forms NADH and NADPH (NAD(P)H). In the presence of NAD(P)H, the enzyme Reductase reduces the proluciferin substrate to form luciferin. Luciferin then serves as a substrate for the luciferase reaction, which produces light. The light signal is proportional to the amount of NAD(P)H in the sample.

The NAD/NADH-Glo™ and NADP/NADPH-Glo™  Assays are designed for the measurement of both oxidized and reduced states in the unphosphorylated and phosphorylated forms, respectively (9) .  The selectivity of each assay is imparted by the specific cycling enzyme.

The use of cycling enzymes in these assays increases the assay sensitivity and provides selectivity (phosphorylated versus nonphosphorylated forms) in comparison to the NAD(P)H-Glo™ Detection System.  As oxidized forms are reduced by selective dehydrogenases and reduced forms converted back by reductase, each reaction cycle results in the release of luciferin molecule.  As the cycling continues more luciferin is produced, and the light output increases but remains proportional to the starting amount of dinucleotides.  The assay sensitivity increases with cycling time, and since only selective dinucleotides are being cycled, the selectivity increases as well. The cycling can continue until all reductase substrate is consumed at which point the luminescence signal remains stable, and the measurements are out of linear range.

In the presence of NAD(P)H, a reductase enzymatically reduces a proluciferin reductase substrate to luciferin. Luciferin is detected using Ultra-Glo™ rLuciferase, which is a component of the Luciferin Detection Reagent, and the amount of light produced is proportional to the amount of NADH or NADPH in the sample. Selectivity is imparted to the NAD/NADH-Glo™ or the NADP/NADPH-Glo™ Assay reactions by including NAD or NADP Cycling Enzyme and Cycling Substrate to selectively measure nonphosphorylated and phosphorylated nucleotides, respectively.

The assays have scalable reaction volumes and are amenable to higher throughput screening.  We have tested the assays with automated liquid dispensers and multiple multimode plate readers and validated them in 96-, Low Volume 384- and 1536- well plates (data not shown).

The NAD(P)H-Glo™ Detection System measures reduced forms of phosphorylated (NADPH) and nonphosphorylated (NADH) dinucleotides (Figure 2). Upon addition of the detection reagent to the sample, reduced dinucleotides are oxidized by the reductase in a reaction that is coupled to luciferin production.  The luminescence signal increases until all NADH or NADPH is oxidized at which point the reaction is completed, and the luminescence signal becomes stable (see Technical Manual #TM398).

This assay can be used for measuring the activity of enzymes that use or produce NAD(P)H, such as dehydrogenases, and is more sensitive than other commonly used diaphorase substrates such as resazurin (Figure 2;  (8) ). The sensitivity (LOD=25nM; Table 1) and low data variability (Z´ > 0.87 at 1uM NADH; data not shown) of the assay chemistry allows analysis of enzymes with low activity or with low Km values.

For measuring cellular NADH or NADPH, the NAD/NADH-Glo™ or NADP/NADPH-Glo™ Assays are recommended due to their greater sensitivity. To measure reduced dinucleotides in cells using the NAD(P)H-Glo™ Detection System, more cells are needed. Also, the samples have to first be lysed in basic solutions (bicarbonate or 50–200mM NaOH solutions) to inactivate endogenous dehydrogenases, and then neutralized before adding the detection reagent. 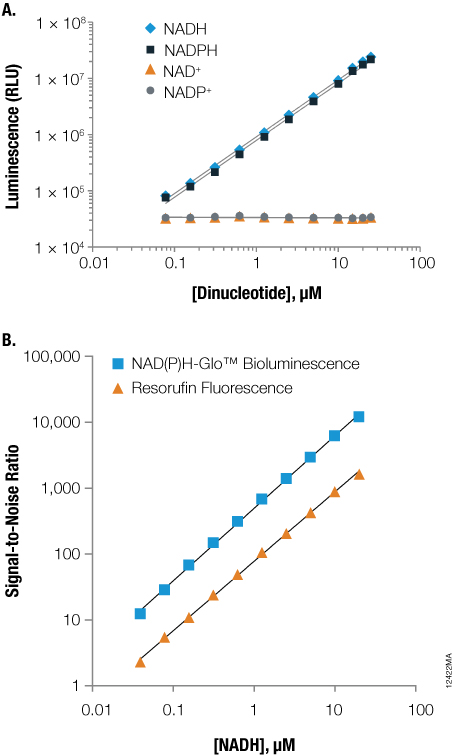 Figure 2. Sensitivity and selectivity of the NAD(P)H-Glo™ Detection System.

The linear range of NAD/NADH and NADP/NADPH Assays is 1–500nM dinucleotide (Table 1) and at least 40-fold selectivity is achieved within the linear range of the assays. These assays have the highest sensitivity with the widest assay window in comparison to other commercially available cycling assays (Figure 4).  The assay sensitivity, in combination with high rates of cycling, allows measurement of dinucleotide levels at low cell densities, insuring selectivity and overcoming activity of endogenous enzymes present in the cells. Therefore, using these assays, changes in the total amount of dinucleotides can be detected rapidly by adding detection reagents directly to cells plated in 96- or 384-well plates. This can be especially useful when screening large numbers of compounds for effects on cellular dinucleotide levels (9) .

For dinucleotide quantitation or for cell lines with highly active dinucleotide consuming enzymes, (for example cells overexpressing CD38), the inhibition of endogenous proteins might be required. In those cases, we recommend lysing the cells in bicarbonate/1%DTAB buffer to quench endogenous enzyme activity. Samples prepared in this buffer can be stored. Therefore this approach is recommended when the samples have to be collected at different time points for kinetic analysis.  Samples prepared in bicarbonate/1%DTAB buffer also can be used for selective degradation and measurement of individual dinucleotides (for buffer composition and detailed protocol see Technical Manuals TM399 and TM400). 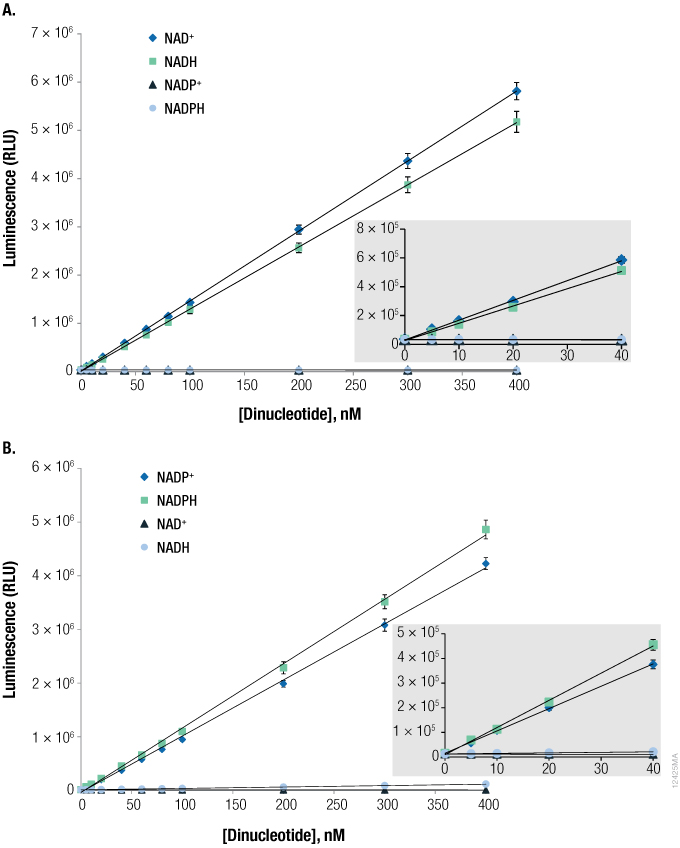 Figure 3. The NAD/NADH-Glo™ and NADP/NADPH-Glo™ Assays are selective for phosphorylated or nonphosphorylated forms of nicotinamide adenine dinucleotides. 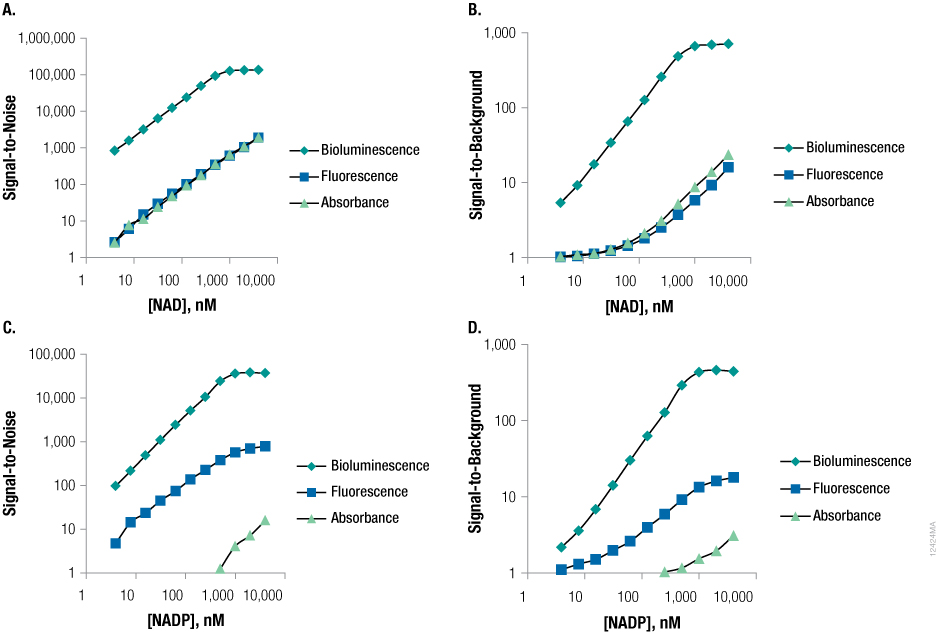 Figure 4. Bioluminescence is the most sensitive means for measuring nicotinamide adenine dinucleotides.

The Detection Systems were compared to other commercially available cycling assays that use dyes generating fluorescent or colorimetric signals.

This article provides an overview of three assays that use bioluminescence to measure nicotinamide adenine dinucleotides in biochemical reactions and in cells. These assays can detect femtomole amounts of dinucleotides, minimizing the number of cells or concentration of enzyme required for the assay. The increased sensitivity due to the cycling reactions in the NAD/NADH-Glo™ and NADP/NADPH-Glo™ Assays allow selective detection of total dinucleotides  (NAD + NADH or NADP + NADPH, respectively) directly in cell lysates. The wide assay window (S/Bmax ~250) and robustness makes them suitable for HTS applications. Additional applications using these assays are discussed in Part II of this series (10) .

Learn how to culture and plate cells for use in a cell-based assay.