Genetically modified organisms (GMOs) are engineered with the goal of producing traits such as herbicide resistance, insect resistance or increased yield. GM crops are primarily grown for use in biofuels, animal feed and clothing; a relatively small percentage of total GMO production is used in food.

In the European Union, regulation of GMOs is based on thresholds for GMO content. The legal threshold for GMO content in food and feed in the EU is 0.9 percent; GMO content below that threshold is excluded from EU labeling requirements (1) . There is no law in the US requiring that foods with GMO ingredients be labeled accordingly; federal legislation has been proposed that would mandate labeling of any food with a GMO ingredient, but this proposed legislation has not advanced (2) .

Quantitative PCR assays are used to determine the amount of a GMO present in a food sample, enabling the verification of GMO thresholds; these quantitative assays are a relatively recent development in the food testing market. PCR-based GMO detection methods can be designed to detect a specific GMO event, or to detect a variety of different GMO events.

Broad-spectrum GMO tests: Many transgenic sequences incorporate the same viral and bacterial genetic elements, to regulate expression of the genetic alterations. Testing for these elements does not reveal a specific GMO event; rather, these broad-spectrum tests can be used to detect a variety of different GMO events.  Commonly used transgenic elements include:

To quantitate the GMO level in a particular sample, a combination of broad-spectrum and event-specific qPCR assays is often the most efficient approach (3) .

The Maxwell® RSC PureFood GMO and Authentication Kit used with the Maxwell® RSC Instrument is designed to provide an easy and automated method for efficient purification of DNA used in PCR-based testing for Genetically Modified Organism (GMO) DNA sequences and PCR-based food and ingredient authentication.

The Maxwell® RSC Instrument is supplied with preprogrammed purification methods and is designed for use with predispensed reagent cartridges, maximizing simplicity and convenience. The instrument can purify DNA in approximately 40 minutes from 1 to 16 raw and processed food samples including: corn, soybeans, canola, ground pork, ground beef, pork gelatin, breaded fish, tortillas, corn chips and rice cakes. 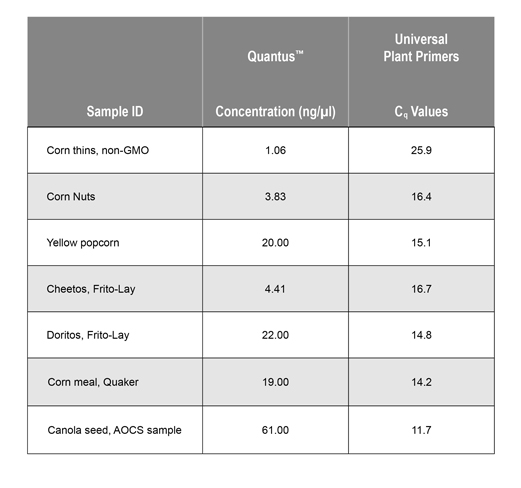 The presence of GMO DNA was determined by amplifying the CaMV P35S sequence using probe-based qPCR. This broad-spectrum assay will detect GMOs that were generated using the cauliflower mosaic virus promoter element, but will not detect all possible GMO events.

Samples were also screened for false positive reactions by amplifying the CaMV ORFIII sequence using probe-based qPCR. Detection of both the P35S sequence and the ORFIII sequence indicates a plant that was naturally infected with the CaMV virus.

To quantitate the copies per reaction for the CaMV P35S and CaMV ORFIII sequences, standard curves were generated for each sequence using the plasmid templates (Figures 1 and 2). 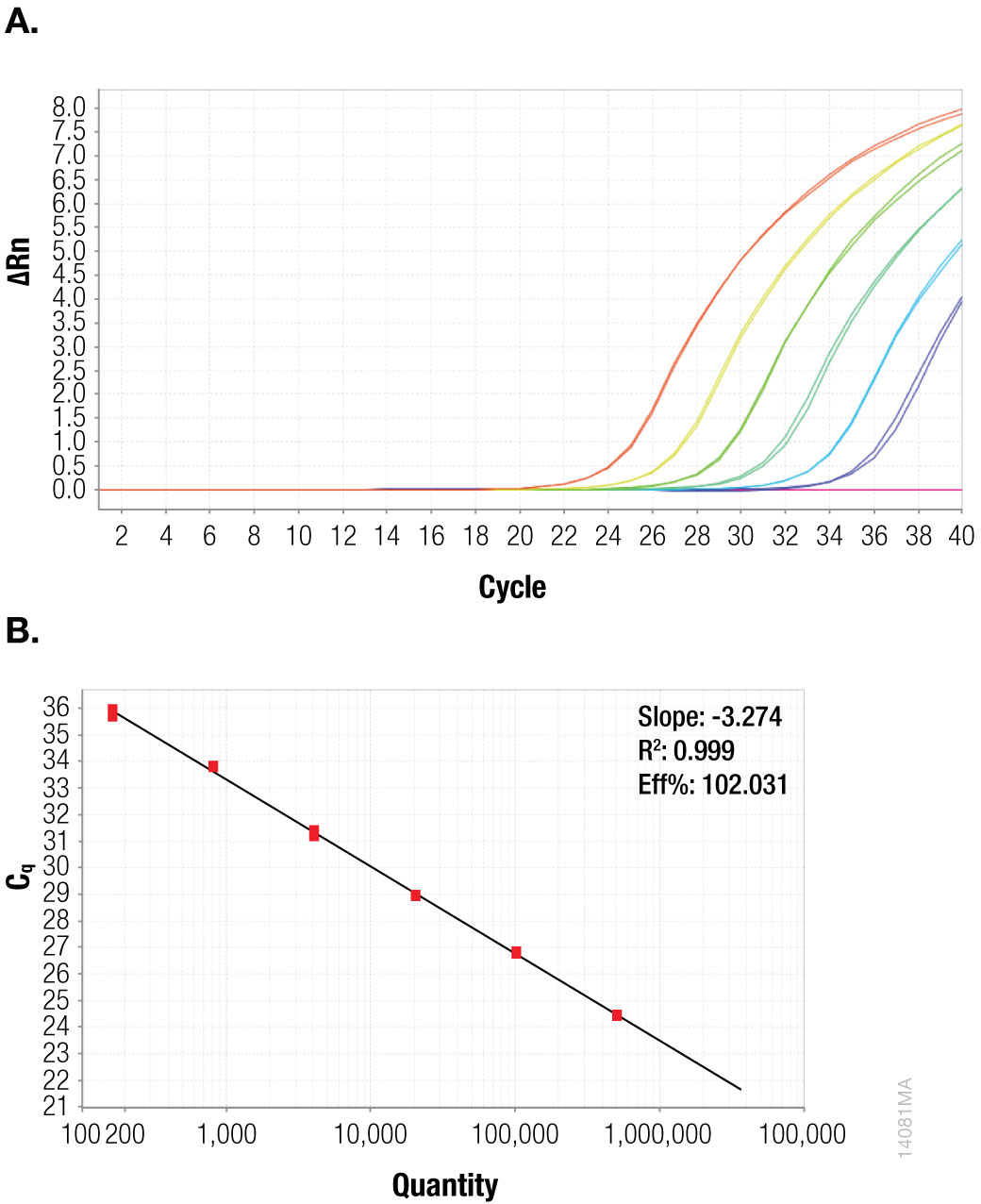 Based on the standard curves for the CaMV P35S and CaMV ORFIII sequences, the copies per reaction for each sequence were determined for all samples (Figure 3). The promoter sequence (CaMV P35S) was detected in 4 of the 7 samples. Among the samples tested, one sample tested positive for both the P35S sequence and the ORFIII sequence, indicating that the plant had been naturally infected with CaMV. The sample (canola seed, AOCS) was a certified reference sample, known to be generated using the figwort mosaic virus (FMV) promoter element.

Figure 3. The copies per reaction for each sequence were determined for all samples based on the standard curves for the CaMV P35S and CaMV ORFIII sequences (y-axis is log scale).

GMO labeling laws vary from country to country around the world. While there is no law in the United States that requires labeling of foods with GMO ingredients, the European Union (as well as other countries) have implemented mandatory labeling of most GMO foods.

The Maxwell® PureFood GMO and Authentication Kit proved to be an efficient method for isolating DNA from the food samples tested in these experiments. The DNA eluates were free from significant amounts of inhibitors (data not shown) and robust amplification was observed when performing qPCR to detect the presence of Universal Plant DNA.

These results highlight an important aspect of GMO testing: a single broad-spectrum assay cannot detect all possible GMOs. In these experiments, our assay can only confirm the presence or absence of the cauliflower mosaic virus promoter element; we cannot conclusively determine that a sample is “non-GMO” without further testing to assess for the presence of other GM elements. Additionally, detecting the presence of a GM element is insufficient to qualify the sample as requiring GMO labeling; the percentage of GM content would need to be assessed to make this determination.