We evaluated nine laboratory buffers and water samples to assess the level of RNase contamination present in a laboratory area designated as “RNase-free”. In addition to testing the water and buffers, we also assessed the ability of Recombinant RNasin® Ribonuclease Inhibitor (RNasin® Inhibitor) to protect RNA in all of the sampled water and buffers. We found six of the nine samples were contaminated to some degree with RNases. In all these cases, Recombinant RNasin® Inhibitor was able to protect introduced RNA from degradation.

Ribonuclease (RNase) contamination is always a concern when performing experiments involving RNA. Even with the cleanest of techniques, RNase contamination can happen and may have profound effects on data from downstream applications. High-quality, intact RNA is crucial to the success of sensitive applications such as RT-qPCR, RNA-protein binding assays, microarray analysis and RNA sequencing. The true predictive value of these techniques hinges on the assumption that the RNA in the reaction is the same as the RNA found in vivo. Although purified RNA may not contain RNases and could be perfectly intact, RNases can be introduced during downstream handling. RNases can be introduced into the laboratory in many ways, from bare hands to open windows and air vents, but the results are still the same: degraded RNA and, ultimately, compromised experiments.

"RNases can be introduced into the laboratory in many ways...but the results are still the same: degraded RNA and, ultimately, compromised experiments."

We evaluated several laboratory stocks of buffers and water used in an academic, RNase-free laboratory for the presence of RNases. The samples were all used to purify RNA-binding proteins and to perform enzymatic and RNA-protein gel shift assays. In addition to testing for RNase contamination, we assessed the ability of Recombinant RNasin® Ribonuclease Inhibitor (Cat.# N2515) to protect the RNA from RNase degradation in each sample type.

Both common and personal (individual) stocks of water (either autoclaved Milli-Q® or commercially available, DEPC-treated water) and buffers were evaluated for the presence of RNases. The samples had been in use in the laboratory anywhere from 1–14 months.

For each sample, 35µl was taken and split into two 17.5µl aliquots. To evaluate the presence of RNases in these samples, one set of reactions was set up with a 17.5µl sample aliquot, 5µl of human total RNA (1µg/µl, Clontech) and 2.5µl of 10X RNase ONE™ Ribonuclease reaction buffer. In parallel, another set of reactions was performed using the same sample/RNA/buffer combination as previously described and included 1µl (40U) of Recombinant RNasin® Inhibitor. A negative control (17.5µl of Nuclease-Free Water (Cat.# P1195) from freshly opened bottle in place of sample) was run for both reactions (with and without Recombinant RNasin® Inhibitor). All reactions were incubated at 37°C overnight. See Figure 1 for a schematic overview of the experimental setup. 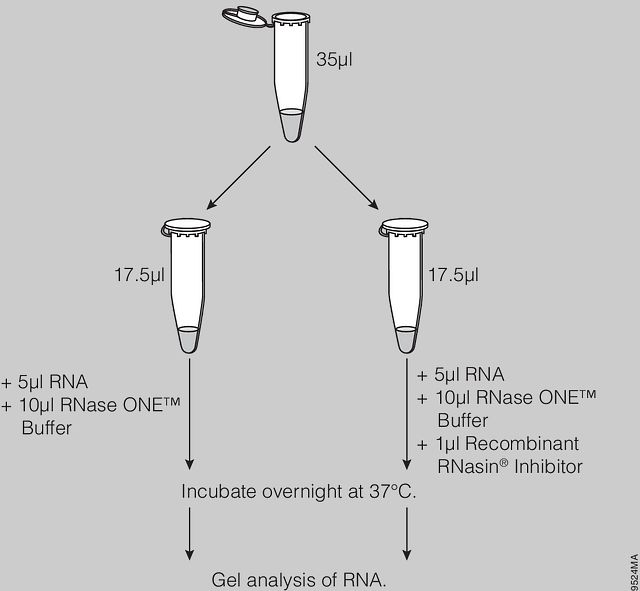 Of the nine samples tested, seven showed varying degrees of RNase contamination when the sample and RNA were incubated without a ribonuclease inhibitor. Both personal (lanes 4, 5, 6 and 9) and common stocks (lanes 8, 10 and 11) of buffers showed contamination of RNases as evidenced by the degradation of RNA. Samples 5 and 8–11 showed significant RNA degradation, indicating that these samples were severely contaminated with RNases (see Figure 2, Panel A).

For all samples tested, the RNA remained intact during the overnight incubation at 37°C when Recombinant RNasin® Ribonuclease Inhibitor was added (see Figure 2, Panel B). 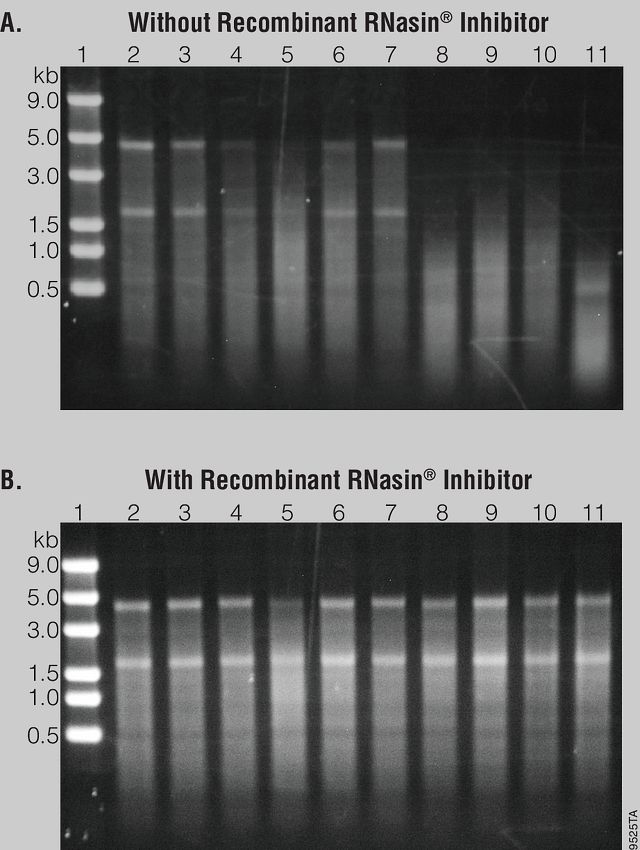 Five microliters of each reaction were mixed with 4µl of Formaldehyde Sample Buffer (Lonza Cat.# 50571) and 2µl of 0.1mg/ml ethidium bromide. The mixtures were incubated at 65°C for 5 minutes. Six microliters of each mixture were run on a 1% agarose gel with 1X TBE buffer at 100V for approximately 25 minutes. 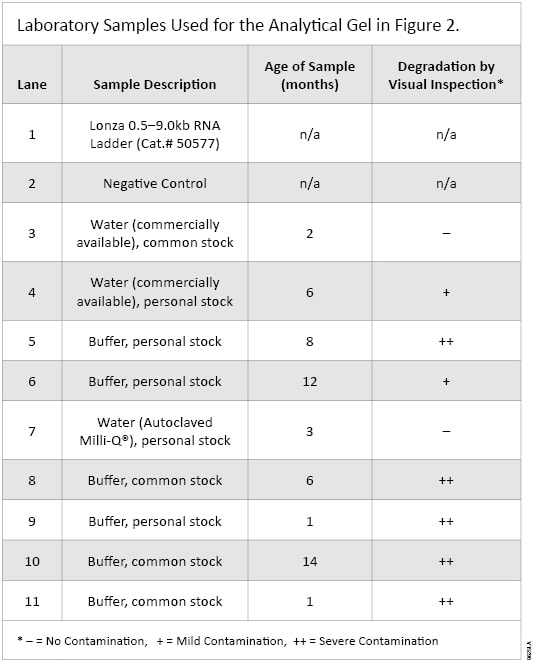 Table 1. Laboratory Samples Used for the Analytical Gel in Figure 2.

RNase contamination was evident in this RNA laboratory despite being designated as “RNase-free”. RNase contamination occurred in both common and personal laboratory stocks. Clean technique and the use of Nuclease-Free Water (Cat.# P1195) are important to preventing RNase contamination but may not be enough to maintain RNA integrity when contaminated buffers or water (both personal or common stocks) are added during downstream processing. Stocks are especially vulnerable to contamination when they are kept in rotation for long periods of time. Adding Recombinant RNasin® Ribonuclease Inhibitor protected the RNA from RNases present in all laboratory samples during the overnight 37°C incubation. Previous studies have shown that RNasin® Inhibitor inhibits RNases over a wide range of temperatures (4, 25, 37, 50°C) and
pH (5–8) (1) , allowing for tremendous flexibility in experimental design. In addition, Recombinant RNasin® Inhibitor is not isolated from human tissue, so it contains no traces of human DNA (2) . These advantages, coupled with the ubiquity of RNases, make Recombinant RNasin® Ribonuclease Inhibitor a vital addition to any reaction involving RNA.

Milli-Q is a registered trademark of Millipore Corporation.