PNGase F is an endoglycosidase that specifically removes N-linked glycans from glycoproteins. It is used extensively in workflows for characterizing N-linked glycan structures on therapeutic proteins and for identifying N-linked glycosylation sites in proteomic studies. We have expressed and purified recombinant PNGase F and shown that it is highly active against a variety of substrates, including purified glycoproteins and complex mixtures of human serum glycoproteins. Furthermore, the enzyme is compatible with the mass spectrometry workflow environment, including non-denaturing conditions and the presence of ProteaseMAX™ Surfactant, Trypsin Enhancer. Finally, we show that recombinant PNGase F can be used to functionally deglycosylate therapeutic antibodies as measured by decreased antibody-dependent cell-mediated cytotoxicity after deglycosylation.

Glycosylation is among the most abundant of all post-translational modifications (PTM) (1). A highly complex PTM, glycosylation has diverse roles that affect both protein function in cellular processes as well as disease manifestation (2). Several large glycoproteomics studies published recently illustrate how PNGase F can be used in combination with mass spectrometry to identify hundreds to thousands of N-linked glycosylation sites in complex biological samples (2).

Furthermore, glycosylation has been shown to dramatically affect properties of biotherapeutics. For example, the pharmacokinetics and potency of recombinant erythropoietin are critically affected by its glycosylation status, while the ability of monoclonal antibodies to mediate efficacy via ADCC is affected by the fucose content of the Fc region glycan (3). Clearly, with glycosylation having such prominent roles in biology, disease progression and therapeutic protein function, as well as serving as a biomarker in diseases like cancer, tools that facilitate glycoprotein characterization are extremely important.

One such tool is the glycosidase PNGase F, which is used extensively for studying glycoproteins. First isolated from Elizabethkingia miricola (formerly Flavobacterium meningosepticum), PNGase F catalyzes the cleavage of N-linked oligosaccharides between the innermost GlcNAc and asparagine residues of high mannose, hybrid and complex oligosaccharides from N-linked glycoproteins (4). Despite being active against most N-linked glycans, PNGase F cannot cleave when the innermost GlcNAc is linked to an α-1,3-fucose, most commonly found in plant glycoproteins and in some insect glycoproteins (5). During glycan removal, the modified asparagine residue is converted to aspartic acid, which imparts a +1Da mass change that can be detected by mass-spectrometry workflows utilizing trypsin or alternative proteases.

These PNGase F properties make it a valuable scientific tool for use in conjunction with downstream analytical techniques, both to identify specific Asn residues that undergo N-linked glycosylation as well as to characterize the chemical structure(s) of the released oligosaccharide chains. 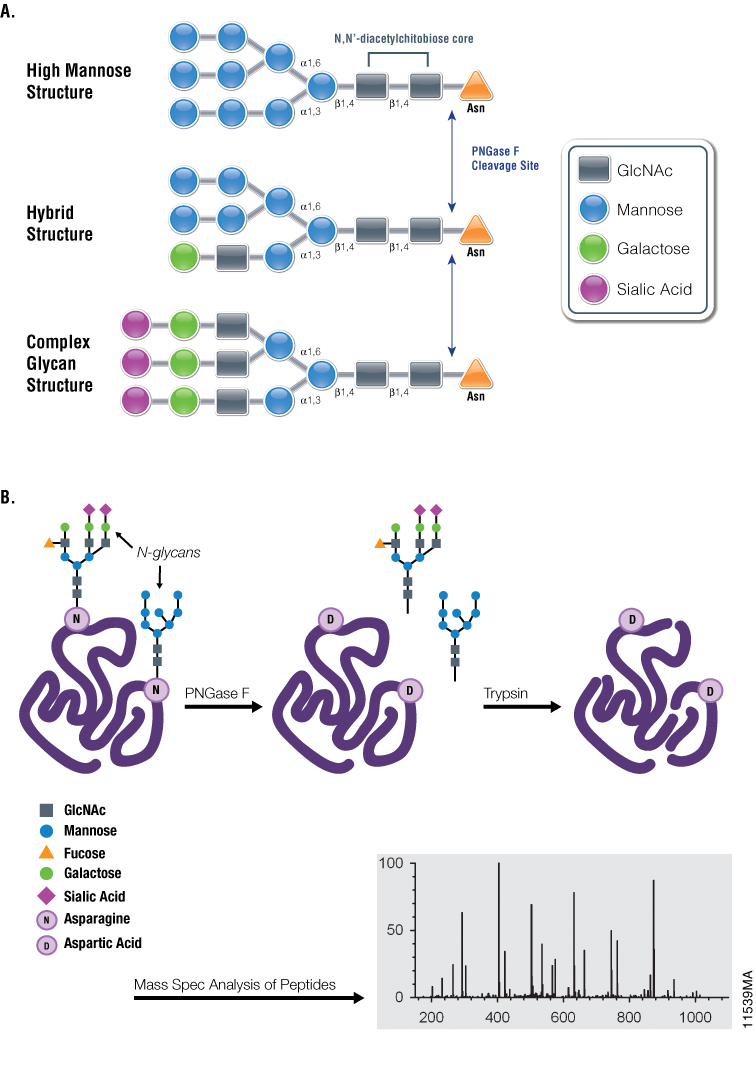 Figure 1. Diagrams showing PNGase F cleavage specificity and its use with mass spectrometry in analysis of N-glycosylation. Panel A. Cleavage specificity of PNGase F. Panel B. Asn-linked glycans can be cleaved by PNGase F, yielding oligosaccharides and a modified protein in which Asn residues, at the site of deglycosylation, are converted to Asp. The conversion of Asn to Asp results in a monoisotopic mass shift of +1Da that can be measured readily using mass spectrometry.

Figure 2. Recombinant PNGase F is highly purified and highly active. Panel A. Native (N) and Recombinant (R) PNGase F are equally pure as determined by SDS-PAGE. Panel B. RNase B was incubated with either native (N) or recombinant (R) PNGase F at high substrate:enzyme ratios and was fully deglycosylated in 1 hour as indicated by the shift from ~18 to 15kDa on SDS-PAGE. Lane M: Precision Plus Protein™ Dual Color Standards (BioRad Cat.# 161-0374). 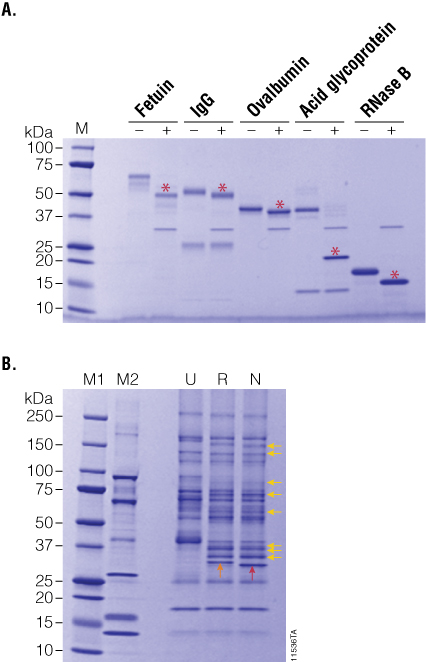 PNGase F is often most effective at deglycosylating protein substrates that are first denatured; typically with detergents and reducing agents. Denatured substrates provide PNGase F with efficient access to the oligosaccharide-protein linkage. However, since PNGase F is often used in workflows that involve downstream characterization of the liberated protein or glycans using downstream proteolysis and mass spectrometry, it would be advantageous to be able to perform deglycosylation reactions under non-denaturing, mass spectrometry-compatible conditions. To test whether recombinant PNGase F was active under such conditions, we incubated the enzyme with a variety of glycoprotein substrates in ammonium bicarbonate buffer lacking denaturants. As indicated in Figure 4, while many of the glycoprotein substrates tested showed reduced deglycosylation under non-denaturing conditions, the heavy chain of human IgG could be fully deglycosylated. Although not fully deglycosylated under the tested conditions, fetuin was partially deglycosylated by PNGase F. Interestingly, RNase B, which is an excellent substrate under denaturing conditions, is quite resistant to PNGase activity in native conditions, while ovalbumin was fully resistant.

Recombinant PNGase F is a highly active enzyme that can be used to efficiently deglycosylate N-linked glycoproteins for characterization of glycan structure and function, as well as for glycan-site identification. We have demonstrated that recombinant PNGase F expressed in E. coli is equally pure and active compared to the native enzyme, and can be used against a variety of substrates and in multiple applications.