Many common laboratory reagents, such as calf intestinal alkaline phosphatase (CIAP) and ethidium bromide, can have detrimental effects on downstream DNA applications or can be potential health hazards. The enzyme CIAP is often used to dephosphorylate vector DNA fragments to prevent religation. However, failure to remove CIAP prior to ligation can reduce the efficiency due to the removal of the 5´ phosphate group from the insert DNA. Since successful ligation requires that at least one of the DNA fragments possesses a 5´ phosphate group, dephosphorylated insert DNA can no longer ligate to the dephosphorylated vector and is functionally removed from the reaction. Like CIAP, the DNA stain ethidium bromide can interfere with downstream applications (1) . Ethidium bromide is also a known mutagen and requires special handling and disposal procedures. These experiments were conducted to determine if CIAP and ethidium bromide would interfere with DNA purification using the Wizard® SV Gel and PCR Clean-Up Systems and if these reagents were removed effectively.

Removal of Calf Intestinal Alkaline Phosphatase: One unit of Calf Intestinal Alkaline Phosphatase (Cat.# M1821) was added to 50µl of a 500bp PCR product. Replicate samples of the PCR product with or without CIAP were purified using the Wizard® SV Gel and PCR Clean-Up System or by phenol/chloroform extraction followed by ethanol precipitation. For the Wizard® System, the DNA was eluted with 50µl of Nuclease-Free Water (Cat.# P1193). For the phenol/chloroform extraction and ethanol precipitation, the DNA pellet was resuspended in 50µl Nuclease-Free Water. The unpurified PCR product without CIAP, unpurified PCR product with CIAP, or purified PCR products were then ligated into the pGEM®-T Easy Vector using the pGEM®-T Easy Vector System (Cat.# A1360). Ligation of purified PCR products were performed in triplicate, as described in the pGEM®-T Easy Vector System Technical Manual #TM042. Chemically competent JM109 cells were transformed with 2µl of the ligation reaction and plated onto LB plates containing IPTG, X-gal, and 125µg/ml ampicillin. After overnight growth at 37°C, colonies were counted. Light blue colonies were counted as white colonies since both types were determined to have insert DNA.

Table 1 shows the results of experiments designed to examine the effectiveness of CIAP removal. Purified or unpurified PCR products were ligated into the pGEM®-T Easy Vector. A ligation with vector but no PCR product was performed as a negative control, and the Control Insert DNA supplied with the pGEM®-T Easy Vector System was used as a positive control for ligation. The number of white colonies, which represent plasmid DNA with insert, is dramatically lower with the unpurified PCR products as compared to those with purified PCR products, regardless of the purification method. Ligation of PCR products purified using the Wizard® SV Gel and PCR Clean-Up resulted in more colonies than phenol/chloroform extraction and ethanol precipitation but gave comparable results for the percentage of colonies that contain insert. Similar results were obtained with DNA purified using the Wizard® SV 96 PCR Clean-Up System (Cat.# A9340, data not shown). 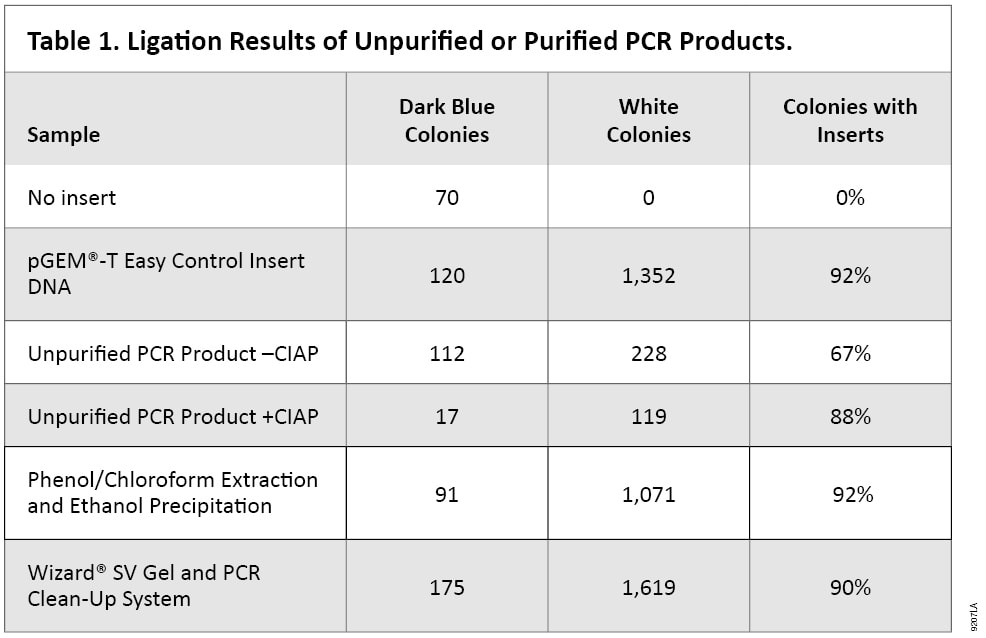 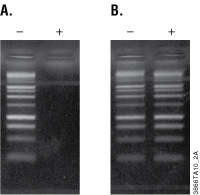 Learn how to set up a vacuum manifold.

pGEM and Wizard are registered trademarks of Promega Corporation.