GoTaq™ DNA Polymerase is a novel DNA polymerase formulation containing native Taq DNA polymerase in a proprietary formulation based on PCR Master Mix (Cat.# M7502). GoTaq™ DNA Polymerase is supplied with 5X Green GoTaq™ Reaction Buffer and 5X Colorless GoTaq™ Reaction Buffer. The Green Reaction Buffer contains two dyes (a blue dye and a yellow dye) that separate during electrophoresis to monitor migration progress. The buffer also contains a compound that increases the density of the sample, so it will sink into the well of the agarose gel, allowing reactions to be directly loaded onto an agarose gel without the need for loading dye(1).

The purpose of this experiment was to verify that PCR products generated using GoTaq™ DNA Polymerase can be used as template DNA in an in vitro expression system (TnT® T7 Quick for PCR DNA; Cat.# L5540). The APC Segment 3 PCR product was chosen as the target DNA. The product of the APC segment 3 gene is more difficult to express compared to firefly luciferase and so may provide a more sensitive measure of inhibitory substances that may carry over from PCR. Mutations in the APC gene have been linked to familial adenomatous polyposis. Disease-associated mutations result in a truncated protein product and tend to be clustered in a small region, designated the mutation cluster region (MCR)(2).

Procedures were performed according to the methods provided in the GoTaq™ DNA Polymerase Product Information Sheet and the TnT® T7 Quick for PCR DNA Technical Manual (#TM235)(3)(4).

The cycling conditions were as follows: 1 cycle of 94°C for 3 minutes; 35 cycles of 30 seconds at 94°C, 1 minute at 60°C, and 2 minutes at 72°C; 1 cycle of 7 minutes at 68°C; soak at 4°C. An aliquot of each reaction was analyzed on an agarose gel. All amplification reactions produced the expected 2kb APC Segment 3 PCR product (data not shown). PCR products were quantitated by PicoGreen® analysis following the manufacturer's directions (Molecular Probes). The PCR products ranged in concentration from ~3–16ng/µl.

Duplicate (50µl) in vitro protein expression reactions were assembled using the TnT® T7 Quick for PCR DNA System and 18ng of APC Segment 3 PCR product. Following incubation at room temperature for 90 minutes, each set of duplicate in vitro transcription/translation reactions was pooled and an aliquot (3µl) analyzed on a 4–12% NuPAGE® Bis-Tris gel. The gels were fixed, dried, exposed to a phosphorimaging cassette overnight, and the amount of APC Segment 3 protein produced was quantitated using the Molecular Dynamics STORM® analysis system.

The results are shown in Figure 1. All of the APC Segment 3 PCR products translated well, producing the ~80kDa APC segment 3 protein regardless of the enzyme or buffer used for PCR (data not shown). Thus, PCR product generated with GoTaq™ DNA Polymerase and either the Green or Colorless GoTaq™ Reaction Buffer are compatible with in vitro translation using the TnT® T7 Quick for PCR DNA System. 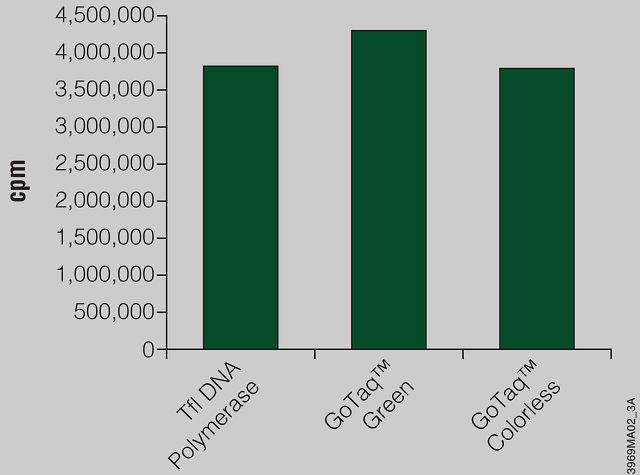