Short tandem repeat (STR) analysis is used quite frequently for forensic science application and therefore is commonly used by forensic or genetic laboratories. Blood and buccal samples are often used for paternity testing and convicted-felon DNA profile databases, as these samples are easy to obtain. Samples are often collected on paper cards, dried and stored. Different paper cards are available; some, such as FTA® cards, contain chemicals that lyse cells and preserve DNA, allowing long-term storage at room temperature. However some cards, such as the Bode Buccal DNA Collector™ device, contain untreated filter paper. Therefore, cells are not directly lysed with such devices.

Blood and buccal samples often contain substances that can inhibit DNA amplification. To remove these inhibitors, a common method is to extract and purify DNA from the cards, then proceed with the analysis. The ability to amplify stored DNA directly would allow the user to get results faster and in a more efficient way. By eliminating the need for DNA purification, laboratories would save reagents and time, and therefore, they would clearly reduce the cost of DNA analysis. Labs with high volumes of samples to analyze, such as forensic databasing labs and paternity labs, would benefit from an effective and consistent direct amplification method.

"We demonstrate the effectiveness of the PowerPlex® ESX 16 System for direct amplification of DNA from saliva and blood samples preserved on FTA® cards."

Buccal samples from 11 donors were collected using the EasiCollect™ sample collection device. Blood samples from 11 donors were collected and preserved in EDTA-anticoagulated Vacutainer® Blood Collection Tubes and applied to FTA® cards within the Sampact™ device. All samples were allowed to dry completely prior to analysis. The PowerPlex® ESX 16 System was used to amplify STR regions from all preserved DNA samples. A 25µl reaction mixture was dispensed in a 96-well plate. Six 1.2mm punches were taken from each card using a BSD 600 puncher, and each punch was added to one well of the 96-well plate.

Buccal samples from six different donors were collected using the Bode Buccal DNA Collector™ device. All samples were allowed to dry completely prior to analysis. A 2µl volume of Bode Punch Prep Solution (Bode Technology Group) was dispensed into wells of a 96-well plate. Three 1.2mm punches were taken from each Bode Buccal DNA Collector™ device using a BSD 600 puncher, and each punch was added to one well of the 96-well plate. The plate was incubated for 20 minutes at 70°C. The PowerPlex® ESX 16 System was used to amplify STR regions from all preserved DNA samples. A 23µl reaction mixture was added to the 2µl of Bode Punch Prep Solution containing the FTA® punch in each well of the 96-well plate.

Amplification of saliva and blood samples using the PowerPlex® ESX 16 System was performed with a Dyad Disciple thermal cycler (BioRad) using the parameters recommended by the manufacturer and a 28-cycle protocol. Following amplification, 2μl of each reaction was dispensed into a 384-well capillary electrophoresis (CE) plate using a Hamilton STARlet and combined with 10µl of formamide and 1.0µl of internal lane standard. Samples were analyzed using the Applied Biosystems 3130 Genetic Analyzer (Applied Biosystems) with a 3kV, 5-second injection. Data analysis was performed using the GeneMapper® ID software, version 3.2.

Although direct amplification provides time savings, it must still produce a high percent of full and correct genotypes. Of the 66 saliva sample punches from EasiCollect™ devices, 61 resulted in full genetic profiles. Genetic profiles obtained from replicate samples of the same donor were concordant. It should be noted that one punch failed due to internal lane standard (ILS) weak signal. Four samples gave null profiles. This result could be explained by the fact that we repeated the sampling step six times for each card: On a saliva card, cells are not equally spread on the entire surface of the card, so sometimes a punch can be picked in a cell-free area of the card. For the five punches that failed to yield a full profile, all other punches from the same card gave a full profile. 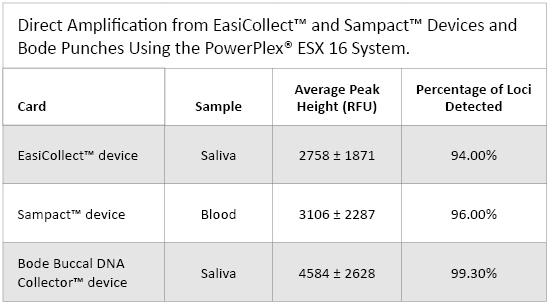 Of the 66 blood sample punches from Sampact™ devices (FTA® cards), ten samples could not be analyzed due to weak ILS signal. This problem was likely caused by the distribution of 2µl of PCR products into the CE plate instead of 1µl, as recommended by the manufacturer. We use this volume of PCR product because we use automated platforms to avoid dispensing problems. Doubling the quantity of PCR products triggers a competition between ILS fragments, amplified fragments and salt contained in the PCR product during injection. To solve this problem, additional ILS must be added to the CE plate and the analysis threshold for the size standard must be reduced.

Among the 56 blood samples analyzed, 52 gave a full profile, two samples gave a partial profile and two samples gave a null profile. Peak heights for all 56 samples averaged 3106 ± 2287RFU (Table 1). This signal is very strong compared with the signal obtained with the PowerPlex® 16 HS System (data not shown; (1) ). This result shows the improved PCR efficiency of PowerPlex® ESX 16 compared to PowerPlex® 16 HS for blood samples. This feature also could be interesting for casework samples. The comparison between EasiCollect™ (saliva) and Sampact™ (blood) results showed more heterogeneity for peak heights and heterozygous balance for the Sampact™ samples compared to the EasiCollect™ samples (Figures 1 and 2). The box plots for blood samples show more variability than box plots for saliva samples. 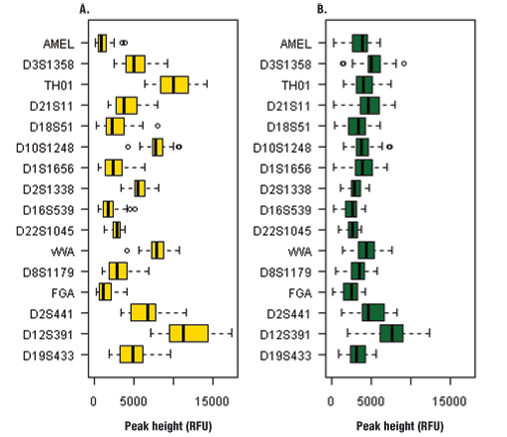 Figure 1. Heterozygous balance for each locus amplified with the PowerPlex® ESX 16 System. 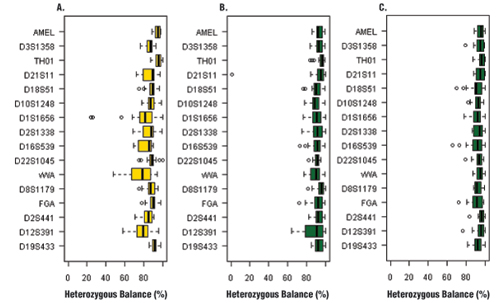 Figure 2. Heterozygous balance for each locus amplified with the PowerPlex® ESX 16 System

Among the 18 saliva samples analyzed, 17 gave a full profile, and one sample gave a partial profile; 99.3% of the loci could be detected (Table 1). Peak heights for all samples averaged 4584 ± 2628RFU (Table 1). One of the main parameters to evaluate genetic profile quality is the heterozygous balance. Heterozygous balance obtained with Bode samples were all above 60%, with the majority above 80% (Figure 2), which is a very good result compared to data obtained with routine samples. The samples that underwent the lysis step performed very well; however, the samples taken directly from Bode Buccal DNA Collector™ device without lysis showed poor amplification quality (data not shown). This result strongly indicated that, when using the Bode Buccal DNA Collector™ device, cell lysis is mandatory prior to amplification to obtain good PCR efficiency. This result also could be interesting for casework samples. If laboratories want to use direct PCR, they must include a lysis step in their process. Providers like Promega could include, in the future, additives in their PCR master mix to avoid this lysis step.

In this article, we have demonstrated the effectiveness of using the PowerPlex® ESX 16 System for direct amplification of DNA from blood or saliva samples stored on FTA® cards or EasiCollect™ device for STR analysis. When using paper that does not include a lysis component, such as the Bode Buccal DNA Collector™ device, a lysis step is required prior to amplification.

The benefits of direct amplification are clearly the time and cost savings. Interestingly, they do not come at the expense of the reliability of the analysis: The percent of full and accurate profiles is still very high. These benefits are major advantages in areas where time may be important, funds may be tight and results are critical as, for example, in paternity, database or forensic laboratories.