The PowerQuant™ System: A New Quantification Assay for Determining DNA Concentration and Quality

Accurate quantification of human DNA extracted from evidentiary items is essential for an efficient forensic short tandem repeat (STR) analysis workflow. Measured DNA concentrations are used to normalize the amount of DNA template to an optimal range for STR amplification reactions, ensuring STR profiles are in the linear range of the capillary electrophoresis instrument with minimal artifacts and stochastic effects. Commercially available qPCR assays are routinely used to determine the concentration of total human DNA as well human male DNA. DNA recovered from casework samples encompasses a wide range of DNA quality. The PowerQuant™ System amplifies target sequences to quantify total human DNA, quantify total human male DNA, assess the level of DNA degradation and detect PCR inhibitors in the DNA sample. The combination of data obtained from each target may be used to choose the optimal DNA template for amplification, the most appropriate STR system (autosomal or Y-STRs) or a process for screening a high volume of samples and determine whether the sample is likely to contain STR amplification inhibitors.

The PowerQuant™ System is a five-dye, four-target qPCR multiplex using hydrolysis probe technology (1) . The system includes three multi-copy targets (autosomal, Y and degradation), an IPC and a passive reference, each in a different dye channel. Amplification of the autosomal target determines the total human DNA concentration, and the Y amplification determines the human male DNA concentration in an extracted sample. The degradation target evaluates the degree of DNA degradation. The IPC target is an internal control for the amplification reaction and assesses whether or not PCR inhibitors are present. The recommended protocol for the PowerQuant™ System uses a four-point standard curve created from serial dilution of the PowerQuant™ Male gDNA Standard (Figure 1). DNA quantification using the PowerQuant™ System provides rapid results with a thermal cycling protocol on the Applied Biosystems® 7500 Real-Time PCR System that requires approximately 1 hour. All qPCR samples presented here were amplified using the Applied Biosystems® 7500 Real-Time PCR System with 7500 Software Version 2.0.6. 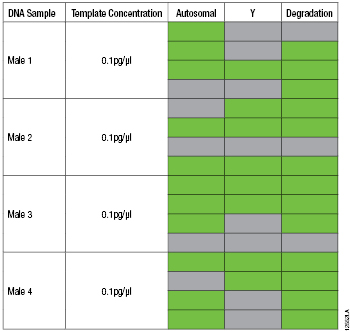 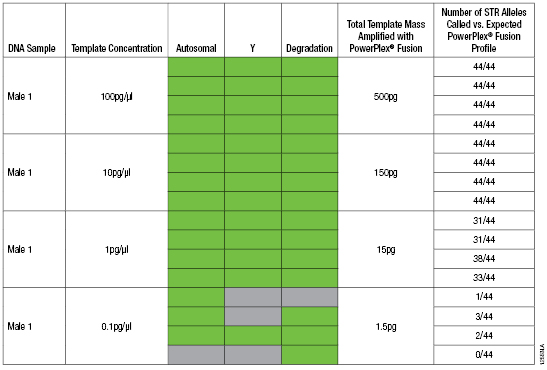 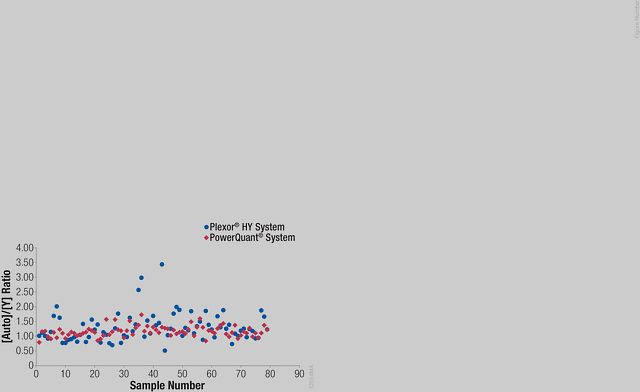 Figure 2. Scatter plot of the [Auto]/[Y] ratios obtained with the PowerQuant™ System and Plexor® HY System.

The degradation target was included in the PowerQuant™ System to determine the degree of DNA degradation in a sample. Inclusion of an additional target to assess DNA degradation prior to STR genotyping has been used to evaluate DNA quality in casework-type samples (4) . The degradation target (294bp) in the PowerQuant™ System is longer than the autosomal and Y targets (136bp or less), increasing the likelihood that DNA degradation can be detected. Genomic DNA at a 10ng/µl concentration was degraded through exposure to increasing amounts of UV-C radiation. Genomic DNA with no UV-C exposure and exposure to 50mJ, 100mJ or 300mJ UV-C radiation was amplified using the PowerQuant™ System. Degradation was evaluated by comparing the DNA concentration measured with the autosomal target to the DNA concentration measured with the degradation target ([Auto]/[D]). These DNA samples were amplified with the PowerPlex® Fusion System and analyzed using the Applied Biosystems® 3130 Genetic Analyzer and GeneMapper® ID-X software, version 1.4, with a 50RFU analysis threshold. The increasing UV-C exposure corresponded to an increase in the [Auto]/[D] ratios (Table 3) as well as STR profiles exhibiting the characteristics of degraded DNA (Figure 3). 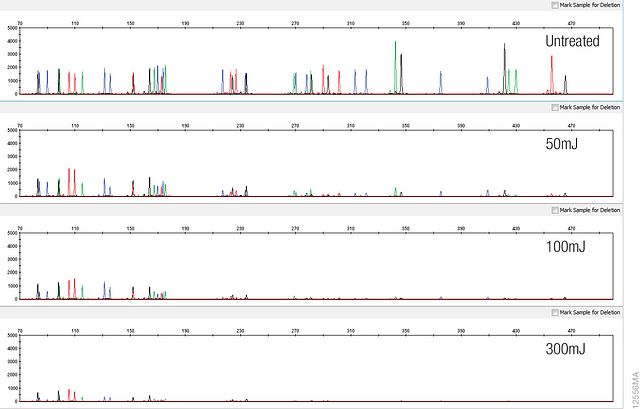 Amplification reactions were performed using the GeneAmp® PCR System 9700, and 1µl of each sample was analyzed using the Applied Biosystems® 3130 Genetic Analyzer.

The presence of PCR inhibitors in casework samples can affect STR amplification and interpretation. The PowerQuant™ System was designed so that PCR inhibitors have a similar effect on the IPC as on STR amplification systems. The IPC target is long (435 base pairs), increasing its susceptibility to inhibitors relative to the shorter autosomal and Y targets. Amplification with the PowerQuant™ System was tested at two concentrations of humic acid (200ng/µl and 400ng/µl) in duplicate. To each 20µl PowerQuant™ System amplification reaction, 2µl of 0.1ng/µl of male genomic DNA was added. To mimic the volume of inhibitor that would carry over with this volume of DNA template, 2µl of humic acid at each concentration also was added (final humic acid concentrations of 20ng/µl and 40ng/µl, respectively). The average concentrations obtained with each target, the measured shift in the quantification cycle (Cq, also known as Ct) for the IPC (5) , as well as the [Auto]/[Y] and [Auto]/[D] ratios were calculated. The effect of humic acid on STR amplification was tested by adding humic acid at a concentration equivalent to 15µl of sample (maximum sample volume) per 25µl PowerPlex® Fusion System amplification reaction. The final inhibitor concentrations with either 200ng/µl or 400ng/µl humic acid were 120ng/µl or 240ng/µl, respectively. A sample was considered inhibited if the Cq shifted ≥0.5 cycles. The IPC Cq data were compared to STR profiles generated by amplifying 0.5ng of genomic DNA with the PowerPlex® Fusion System to demonstrate the correlation between the two systems (Table 4, Figure 4). Amplification reactions were analyzed using the Applied Biosystems® 3130 Genetic Analyzer and GeneMapper® ID software, version 3.2, with a 50RFU analysis threshold. Although the Cq for the IPC shifted, the DNA concentrations determined with the autosomal and Y targets were unaffected by the presence of humic acid. Despite the length of the degradation target, its amplification was also resistant to humic acid inhibition, preventing a false indication of sample degradation when humic acid was present. 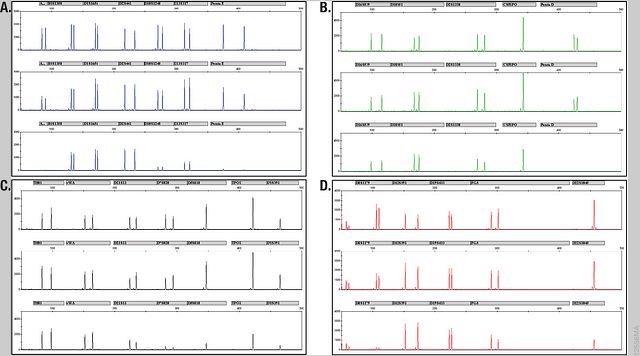 The PowerQuant™ System chemistry was designed so that the amplification sensitivity and tolerance to inhibitors are comparable to those of new STR systems (e.g., PowerPlex® Fusion and PowerPlex® Y23 Systems). The same levels of sensitivity are obtained with the PowerQuant™ System and Plexor® HY System. When no DNA is detected from a sample amplified using the PowerQuant™ System, a laboratory can be confident that no interpretable STR DNA profile will be detected. As with previous commercial quantification kits (e.g., Plexor® HY System), customers can use the [Auto]/[Y] ratio to determine the most appropriate STR system for obtaining the most informative DNA profile from an evidentiary sample. The [Auto]/[Y] ratio variance for single-source samples is reduced compared to that of the Plexor® HY System, allowing customers to better assess whether a sample includes a mixture of male and female DNA. Interpretation of the IPC Cq shift provides the analyst with information regarding the presence of PCR inhibitors and whether a sample is ready for STR amplification or if re-purification or dilution is necessary prior to STR amplification. The information obtained from the [Auto]/[D] ratio calculation is predictive of DNA quality. When humic acid was added to the amplification reaction, only the IPC was affected; the autosomal and Y targets reliably determined sample concentration, and the [Auto]/[D] ratio did not falsely flag the samples as degraded. The PowerQuant™ System can be used to predict the quality of an STR profile and determine DNA concentrations in approximately 1 hour. The faster thermal cycling conditions and 4-point standard curve allow a laboratory to test more samples, and the additional data generated with the PowerQuant™ System provide the laboratory with more information about the quality of DNA recovered from an evidence item, improving laboratory workflow.