The ReliaPrep™ Blood gDNA Miniprep System provides an easy-to-use method for isolating genomic DNA (gDNA) from whole blood. The novel cellulose-based chemistry purifies DNA without the need for ethanol or isopropanol and simplifies sample processing by providing all reagents in a ready-to-use format. The minicolumn design provides efficient washing and low column dead volumes for purification of concentrated DNA that is highly pure, with A260/A280 ratios of greater than 1.8 and A260/A230 ratios of 1.7–2.2. We compare the ReliaPrep™ Blood gDNA Miniprep System to existing methods for gDNA purification.

DNA isolation from blood collected in Vacutainer® tubes containing various anticoagulants is a common procedure performed in the research laboratory. Numerous methods and commercial reagent kits based on the interaction between DNA and silica in the presence of chaotropic salts exist for isolating nucleic acid from blood. These reagents offer a more rapid protocol for nucleic acid purification compared to the precipitation-based methods that they replace. However, existing isolation systems all use ethanol or isopropanol washes or precipitations during the purification protocol. Alcohol or salt carryover can cause failure of downstream enzymatic reactions.

We present a new kit for isolating gDNA from whole blood. The ReliaPrep™ Blood gDNA Miniprep System isolates gDNA using cellulose as the binding matrix under specific conditions that eliminate the use of ethanol or isopropanol. In addition to removing these potential inhibitors, the purification reagents are provided in a ready-to-use format, which requires no reagent additions, simplifies reagent preparation and reduces the opportunity for errors during sample processing. This system yields high-quality DNA that is compatible with downstream enzymatic assays including microarray analyses.

The ReliaPrep™ Blood gDNA Miniprep System is supplied with all reagents required for DNA purification from blood. Samples are processed using a binding column in a microcentrifuge tube, with a capacity of up to 200μl of blood per purification. The genomic DNA isolated is high-quality and can be used in common applications such as agarose gel analysis, restriction enzyme digestion and PCR analysis. An important feature with the ReliaPrep™ System is the combination of column plastic and membrane. The column has a smaller cross section through the binding matrix compared to the Wizard® SV purification column (Figure 1). The ReliaPrep™ Column geometry allows for more efficient washing of the membrane and a smaller volume loss (i.e., dead volume), resulting in recovery of the full 50μl of elution buffer applied to the membrane. 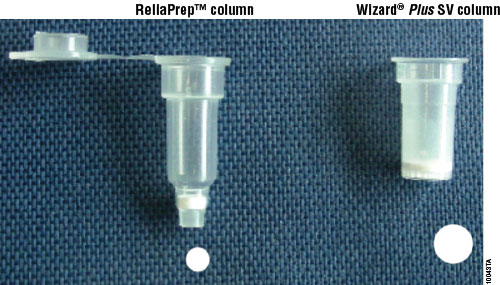 Figure 1. The ReliaPrep™ Column uses a smaller diameter binding matrix when compared to the Wizard® SV Minicolumn and other miniprep columns.

The ReliaPrep™ Blood gDNA Miniprep System uses a simple four-step method for processing. The blood sample is mixed and then up to 200μl of blood is placed in a processing tube and the sample is disrupted by digestion with proteinase K. The DNA is then bound to the ReliaPrep™ Column. The column is washed three times with Column Wash Solution, and the DNA is eluted in 50–200μl of Nuclease-Free Water. Processing time takes approximately 45 minutes for 12–18 samples, including the 10-minute proteinase K digestion. Detailed protocol information can be found in the ReliaPrep™ Blood gDNA Miniprep System Technical Manual, TM330.

The primary factor affecting  gDNA yield from blood samples is the white blood cell count (WBC). Blood was collected from donors, and the WBC was determined. Two hundred microliters of blood were processed using the ReliaPrep™ Blood gDNA Miniprep System, and gDNA yield was determined by UV spectroscopy. Yields ranged from 4–10μg, depending on the white cell count (Figure 2), with approximately 6μg of gDNA expected from an individual with a WBC count of 5 × 106 cells/ml of blood. Purity was assessed by absorbance spectroscopy, specifically by examining the absorbance ratios of A260/A280 and A260/A230. Typically, samples with  A260/A280  ratios greater than 1.7 and A260/A230  ratios between 1.8 and 2.2 are thought to be of good purity. The samples used in this study averaged an A260/A280 ratio of 1.90 and an A260/A230 ratio of 1.97. 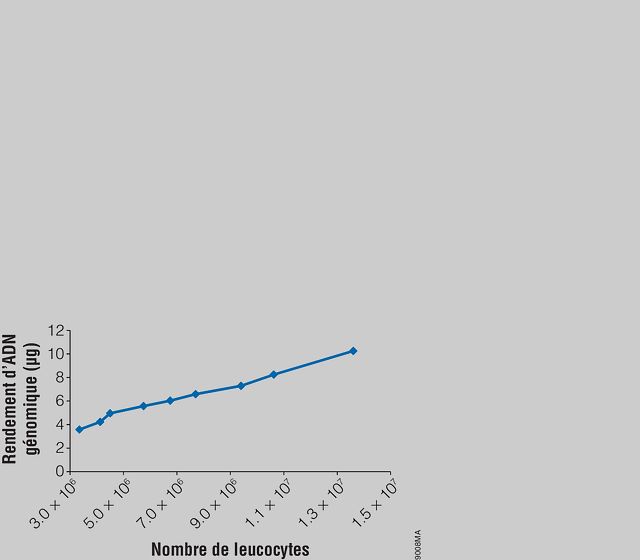 Whole blood was obtained from several individuals, and white cell counts were determined using a hemocytometer. Two hundred microliters of blood was used for genomic DNA purification (n = 3 or 4), and the amount of isolated gDNA was quantitated by absorbance spectroscopy.

To determine the effect of elution volume on the gDNA yield and recovery, blood samples (200μl) from a single donor were processed in parallel following the standard ReliaPrep™ System protocol. Samples were eluted in increasing amounts of Nuclease-Free Water. Yield and purity were determined by UV absorbance spectroscopy. Eluting in a smaller volume resulted in more concentrated DNA samples, with a minimal decrease in yield. Similar purity was observed regardless of the elution volume (Figure 3). 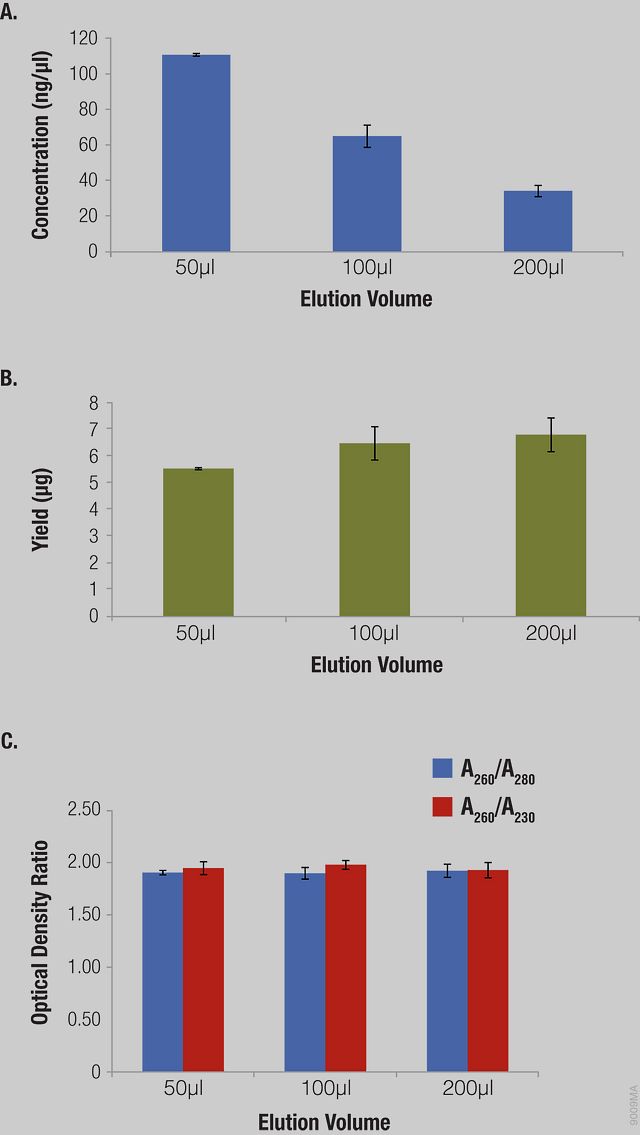 Figure 3. Comparison of elution volume with concentration, yield and purity. 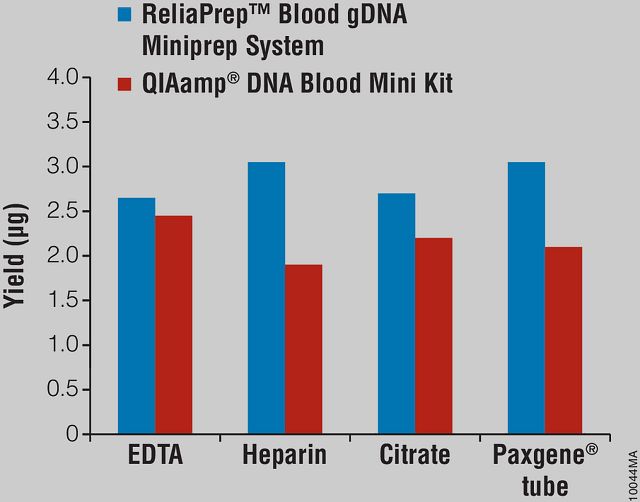 Figure 4. Purification of gDNA from blood in different anticoagulants.

The performance of the ReliaPrep™ Blood gDNA Miniprep System was compared to other commercially available gDNA isolation systems, including Qiagen QIAamp® Blood DNA Mini Kit; Invitrogen PureLink™ Genomic DNA Isolation System; Macherey-Nagel NucleoSpin® Blood and NucleoSpin® Blood QuickPure kits. With the exception of the ReliaPrep™ System, which uses a cellulose binding matrix, all of these systems use a spin-column format for processing samples and a silica binding matrix for purification. Whole blood samples were divided into aliquots and frozen (–20°C ). For all systems tested, 200μl of frozen blood was thawed and processed (n = 6 for each) according to the manufacturer’s instructions. The  gDNA was eluted in the elution volume recommended for each kit. The yields, concentration and purity were determined using absorbance spectroscopy. The highest average yields were obtained using the ReliaPrep™ Blood gDNA Miniprep System and the Qiagen QIAamp Blood DNA Mini Kit. The Macherey-Nagel NucleoSpin® QuickPure yielded slightly less (Figure 5, Panel A). The Invitrogen PureLink™ Genomic DNA Isolation System and Machary Nagel NucleoSpin® Blood systems produced the lowest yields. The concentration of eluted gDNA was primarily dependent on the elution volume of the preparation. The NucleoSpin® Blood QuickPure kit was eluted in 50μl, which resulted in the most concentrated gDNA of all the kits tested (Figure 5, Panel B). The ReliaPrep™ System, with an elution volume of 100μl, had the second highest concentration. The remaining systems had lower gDNA concentrations. Previous results suggest that  the ReliaPrep™ System would yield concentrations of DNA similar to the NucleoSpin® QuickPure kit if the optional 50μl elution volume was used (Figure 3).

The performance of all the gDNA samples were tested using a qPCR assay. All of the samples successfully amplified, and none of them inhibited the internal PCR control (as assessed with Plexor® HY System, data not shown).

Sample collection remains a crucial step in genomic studies, and methods have been developed to try to reduce the invasiveness of sampling in order to increase cohort compliance and participation. Oral swabs or saliva samples are attractive collection options because they are simple, can be performed at home and are noninvasive. Oragene•DNA/saliva sampling devices were used to collect saliva samples from 12 individuals. The samples were processed following the standard blood protocol for the ReliaPrep™ Blood gDNA Miniprep System or using a modified protocol that eliminated the proteinase K digestion. The ReliaPrep™ Blood gDNA Miniprep System was able to isolate gDNA from the 12 saliva samples using either protocol (Figure 6). As with blood samples, saliva from different individuals contains different numbers of leukocytes, which influences the yield of gDNA. Genomic DNA recovery from the 200μl of Oragene•DNA/saliva samples  varied from 1–11μg. Samples treated with proteinase K and those without protease treatment gave similar results. Purity was assessed by spectrophotometry with an average A260/A280 ratio of 1.90 and A260/A230 ratio of 1.97. These results suggest that the ReliaPrep™ purification columns and reagents are suitable for gDNA isolation from saliva samples. 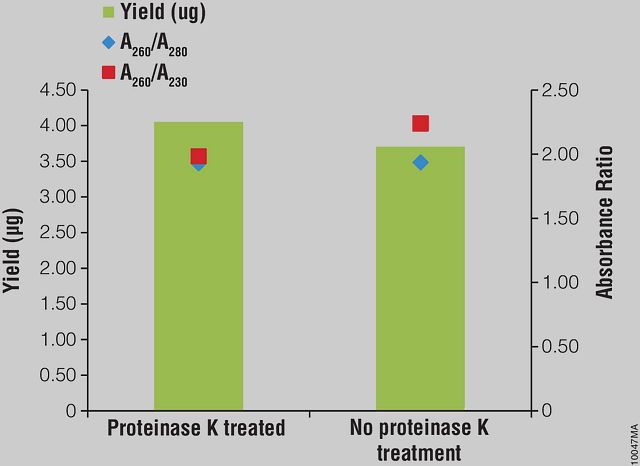 Saliva was collected from different individuals (n = 6) and 200μl was processed following the ReliaPrep™ Blood gDNA Miniprep System or with a modified protocol eliminating the proteinase K digestion. Yield and purity were determined by UV absorbance spectroscopy.