Cell-based model systems are being used increasingly to screen compounds for toxic effects because they allow mechanism-centered assays to be used in rapid, high-throughput approaches. Bioluminescence-based reporter gene assays that measure genetic response element activity are well suited to this approach. In addition, signaling pathways involved in the cellular stress response have been identified as valuable screening targets that underlie biological responses and may be predictive of toxicity in the whole organism. Here we describe a panel of response element vectors targeting key pathways involved in the cellular stress response and use well characterized model compounds to demonstrate how the vectors can be used in reporter gene assays, either individually or as a panel, to profile compounds for the ability to cause cellular stress and toxicity.

The field of toxicology is currently undergoing a paradigm shift away from traditional animal exposure studies towards high-throughput approaches using computational models, alternative animal models and cell-based in vitro model systems (1) . The primary goal is to rapidly screen the large number of compounds present in our environment for which no toxicity information currently exists. Cell-based luciferase reporter gene assays provide a method that is well suited to this new vision of toxicological research. Here we describe a panel of ready-to-use response element vectors targeting key pathways involved in the cellular stress response. We demonstrate a high level of performance in a variety of cell backgrounds and show that this vector set can be easily screened in parallel to profile compounds for the potential to cause cellular stress across multiple signaling pathways.

In the report Toxicity Testing in the 21st Century: A Vision and a Strategy, the National Research Council (NRC) outlines a strategy that moves away from reliance on traditional high-dose animal exposure studies towards the use of high-throughput in vitro assays for first-tier chemical screening (1) . This new approach provides the advantage of rapid screening of a large number of chemicals using mechanism-centered target assays that allow development of predictive models of toxicity. In response to the NRC report, the US federal government has established groups such as Tox21, a collaborative initiative that pools federal resources to perform robotic screening with well designed in vitro assays. Additional programs include the Environmental Protection Agency’s ToxCast program and the European Partnership for Alternative Approaches to Animal Testing (EPAA). All of these efforts share similar goals of using target-specific, mechanism-based in vitro assays to prioritize compounds that require further evaluation, while reducing dependency on whole-animal testing. This approach can be applied to screening a wide range of chemical compounds including pesticides, nanomaterials, failed drugs, cosmetics, environmental chemicals and chemical mixtures.

Reporter gene assays that measure genetic response element activity are well suited to the high-throughput chemical-screening approaches discussed above. These assays are rapid, quantitative and automatable and allow dose-response assessment of chemical activity on specific cellular pathways. However, researchers must first determine which cellular pathways to target in these assays. The pathways involved in the cellular stress response are useful screening targets for underlying biological responses and may be predictive of toxicity in the whole organism (2) . The stress response pathways are expressed ubiquitously in normal cell types with no sex specificity and have the primary role of mediating the cell’s response to various chemical stimuli to maintain cellular homeostasis. However, if sufficiently perturbed these pathways also are involved in cell-fate decisions such as proliferation, differentiation or apoptosis, which could result in toxicity. Activation of these pathways may occur with lower concentrations and shorter exposure times than other end points, such as cell death, making them good predictors of subsequent toxicity. In addition, assaying for activation of stress response pathways can provide mechanistic information about a compound’s mode of action, and these pathways can be studied in different cell types to gain information about tissue-specific responses to chemical exposure.

Promega has designed and validated a panel of ready-to-use response element-containing reporter vectors that target the key pathways involved in cellular stress response (Table 1). Constructs were created by cloning multimerized response elements into the pGL4 vector, which is optimized for use in reporter gene assays (3) . Optimized luc2P firefly luciferase is used as the reporter gene, allowing a sensitive and specific signal of pathway activation. These constructs can be used individually or in parallel to screen compounds for their ability to initiate cellular stress response in transient or stable systems. 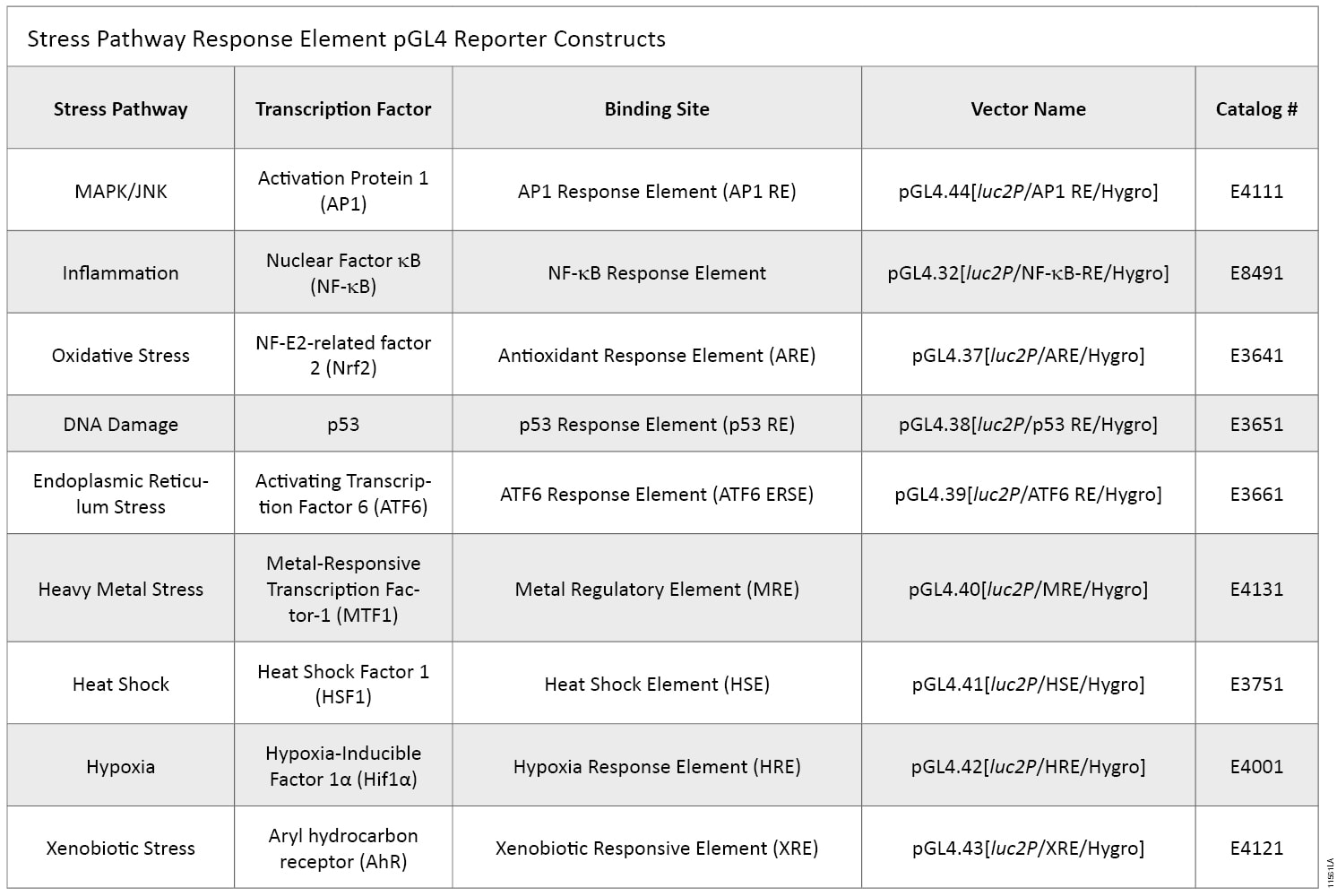 To demonstrate the utility of the stress response vectors, we first tested the vector constructs individually in a variety of cell types by transiently co-transfecting them with a control vector constitutively expressing Renilla luciferase. Cells then were treated with well characterized chemical activator(s) of each specific pathway, and luciferase activity was assessed using Dual-Glo® Luciferase Assay System. We observed a dose-dependent increase in normalized luminescence for each combination of cell line and construct tested, demonstrating that these vectors can produce specific, high-quality data in a variety of different cell backgrounds. Example data for each response element vector can be seen at: www.promega.com/products/pm/pgl4-signaling-vectors/

We also demonstrated that the response element vectors can be screened as a panel to profile compound activity against multiple signaling pathways (Figure 1). In these experiments HepG2 or HEK293 cells were transiently transfected with each reporter gene construct using FuGENE® HD Transfection Reagent and plated in 96-well plates. Following overnight incubation, cells were treated with a concentration series of different test compounds, such as tunicamycin, cadmium chloride (CdCl2) or tert-butylhydroquinone (tBHQ). After the specified period of time, the ONE-Glo™ Luciferase Assay System was used to collect luciferase reporter data from each well of cells to determine which pathways were activated at each compound dose. Tunicamycin showed very specific pathway activation of only the endoplasmic reticulum stress response element (ATF6 ERSE) reporter construct (Figure 1, Panel A). In contrast, other compounds showed more complex stress activation signatures that are consistent with those reported previously (reviewed in reference 2). For example, CdCl2 activated the metal response element (MRE) construct at lower concentrations but also strongly activated the heat shock element (HSE) construct at higher concentrations (Figure 1, Panel B). tBHQ also demonstrated a more complex stress response, strongly activating the heat shock (HSE) and antioxidant (ARE) response element constructs but also activating the AP1 response element (AP1 RE) construct to a lesser extent.

Figure 1. The effect of compound exposure on activation of a response element panel.

HEK293 cells (Panels A and C) or HepG2 cells (Panel B) were transiently transfected with each of the reporter constructs or the pGL4.13[luc2/SV40] Vector control construct (luciferase under constitutive expression) and plated in 96-well plates. After overnight incubation, cells were treated with a concentration series of tunicamycin (Panel A), CdCl2 (Panel B) or tBHQ (Panel C) for 18 hours, 6 hours and 18 hours, respectively, before determining luciferase reporter activity using the ONE-Glo™ Luciferase Assay System. Values represent the fold induction over untreated control, with the average and standard error of the mean for three replicates plotted. 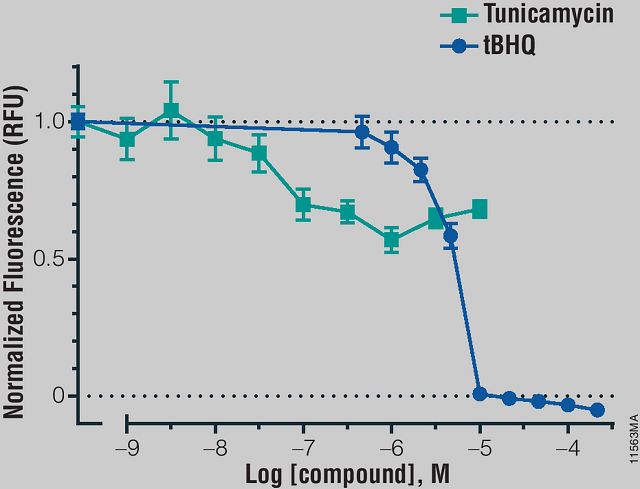 Figure 2. The effect of compound exposure on activation of a response element panel.

HEK293 cells were transiently transfected with the pGL4.13[luc2/SV40] Vector and plated into 96-well plates. Following overnight incubation, cells were treated with a concentration series of either tBHQ or tunicamycin for 18 hours followed by viability assessment using CellTiter-Fluor™ Cell Viability Assay. Values are the average and standard deviation of six replicates. Background fluorescence was measured from wells containing no cells and subtracted from the raw fluorescence values. Values then were divided by the average fluorescence from untreated cells to obtain normalized fluorescence.

Efforts to streamline methods by which chemicals are screened for their potential to cause toxicity are currently underway in a variety of different programs. Reporter gene assays using the pGL4 stress response vector series can be integrated easily into these high-throughput screens to provide dose-dependent mechanistic information that will aid prioritization of those compounds that require more focused in-depth toxicity analysis. These vectors can be incorporated into diverse cell model systems designed to predict specific target site toxicities and can be assayed together as a set to create chemical stress signatures for specific classes of compounds. The response element screening also can be combined with other assays, such as those that measure cell viability, to better interpret the cellular effects of compound exposure.

FuGENE is a registered trademark of Fugent, L.L.C., USA.