Reverse transcriptases (RTs), also known as RNA-directed DNA polymerases, were first identified in retroviruses(1) (2) . In addition to the critical role these enzymes play in a variety of major human diseases (HIV, hepatitis and some cancers), RTs are a fundamental component of the molecular biologist’s toolbox. RT activity is critical for many basic techniques including real-time and endpoint RT-PCR, labeled-probe generation for microarrays and cDNA cloning. The ideal reverse transcriptase is robust (highly active under a variety of conditions) and converts all primed RNA within a sample to cDNA, regardless of its abundance, length or secondary structure.

The most characterized RTs used for molecular biology are the retroviral RTs: avian myeloblastosis virus (AMV) and Moloney murine leukemia virus (MMLV). Genetic engineering and development of proprietary RT-enhancing buffers have led to the commercial availability of new enzymes that offer superior performance over these naturally occurring RTs.

We performed a head-to-head comparison of five popular trademarked RTs: GoScript™ (Promega Cat.# A5003), SuperScript® II and SuperScript® III (Invitrogen Cat.# 18064 and 18080, respectively), and Omniscript® and Sensiscript® (Qiagen Cat.# 205113 and 205213, respectively) reverse transcriptases. We compared these five RTs for their utility in detecting trace transcripts by real-time PCR, ability to transcribe a long RNA and sensitivity to ethanol, a common contaminant in RNA preparations. We also compared SuperScript® III and GoScript® reverse transcriptases for their ability to transcribe a challenging GC-rich mRNA.

"In all cases, GoScript™ Reverse Transcriptase performed as well as or better than all other reverse transcriptases tested."

Gene expression analysis is the most common use for RTs. The ideal RT will reverse transcribe even the least abundant mRNAs within a pool, allowing single-cell transcript detection. (Note: The PCR conditions used also will influence detection sensitivity.) To compare RT sensitivities of transcript detection, we used each enzyme and oligo(dT) as the primer to reverse transcribe serial dilutions of mouse liver total RNA representing 1 to 10,000 cell equivalents (assuming 20pg of total RNA per cell). Two microliters of each cDNA synthesis reaction then was analyzed using TaqMan® real-time PCR (Applied Biosystems). The following four transcripts were analyzed (listed from highest to lowest abundance): glyceraldehyde-3-phosphate dehydrogenase (GAPDH), lamin A, transformation-related protein 53 (trp53) and cyclin-dependent kinase 9 (cdk9). 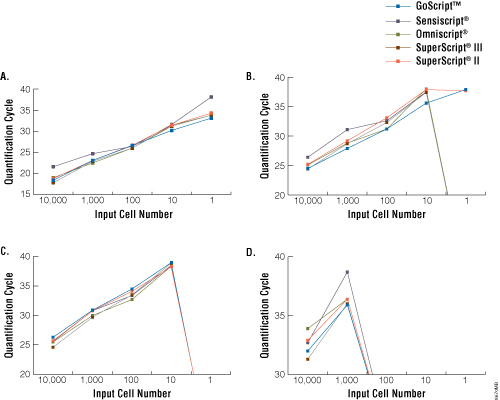 Reverse transcription of full-length mRNAs is critical for cloning or when the PCR target is at the 5´ end of a transcript that will be oligo(dT)-primed. Without efficient extension during the RT reaction, portions of the transcripts may be lost to further analysis. We tested the ability of each RT to reverse transcribe an 8.9kb adenomatosis polyposis coli (APC) transcript from human total RNA. All reactions used standard incubation times of 50–60 minutes. We compared an oligo(dT)-primed reaction to a random-primed control reaction. cDNA was analyzed by endpoint PCR using primers that amplify a 940bp region at the 5´ end (forward primer included ATG start codon).

Figure 2. Reverse transcription of an 8.9kb APC transcript. Human colon total RNA (Clontech Laboratories, Inc.) was reverse transcribed using oligo(dT) (O) or random primers (R) according to the manufacturer’s instructions for each reverse transcriptase. cDNA then was analyzed by endpoint PCR using GoTaq® Green Master Mix (Cat.# M7122) with primers for a 940bp amplicon at the 5´ end of the transcript. Each reaction (5µl) was analyzed by agarose gel electrophoresis and ethidium bromide staining. All samples shown were analyzed in the same data set and gel with the same scan settings. Gel images are representative of results from three separate experiments.

Ethanol is routinely used in nucleic acid purification protocols. Insufficient drying of either the RNA pellet or purification column (depending on the method used) can lead to residual ethanol in the final RNA. We examined the ability of an ethanol contaminant to affect each RT. An in vitro-transcribed RNA (1.2kb Kanamycin Positive Control RNA) was reverse transcribed in the presence of 5%, 10% or 20% ethanol, and the results were compared to those of an untreated control. cDNA then was analyzed by real-time PCR using GoTaq® qPCR Master Mix. The relative change in transcript level was determined based on the difference in quantification cycle values in the presence and absence of inhibitor [2(Cqinhibitor–Cqnone)]. All RTs exhibited minimal or no effect at 5% ethanol (Figure 3). At 20% ethanol, all RTs were affected to some extent. GoScript™ Reverse Transcriptase showed the smallest decrease in the ability to detect transcript in the presence of ethanol: 1.07-fold (<10%) change 1.07-fold (<10%) change at 10% ethanol and 1.2-fold (20%) change at 20% ethanol. 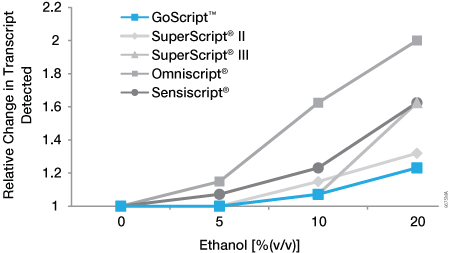 Figure 3. Sensitivity of reverse transcriptases to ethanol inhibition. An in vitro-transcribed RNA (1.2kb Kanamycin Positive Control RNA, Cat.# C1381) was reverse transcribed using oligo(dT) primer according to the manufacturer’s instructions for each RT. Reverse transcription was carried out in the absence and presence 5%, 10% and 20% ethanol. cDNA was analyzed by real-time PCR using GoTaq® qPCR Master Mix (Cat.# A6001). The change in quantification cycle values in the absence and presence of ethanol was determined and converted to relative change in transcript level[2(Cqinhibitor–Cqnone)]. Data are the average of three separate experiments.

Highly structured or GC-rich transcripts can be difficult to reverse transcribe due to premature termination, resulting in truncated cDNAs. The use of elevated temperatures during the RT reaction can help denature the RNA, allowing the RT to advance more effectively. SuperScript® III RT is relatively thermostable and has a standard reaction temperature of 50°C. This is 8°C higher than that of SuperScript® II and GoScript™ reverse transcriptases (42°C) and 13°C higher than that recommended for Omniscript® or Sensiscript® RTs (37°C).

We compared the ability of GoScript™ and SuperScript® III reverse transcriptases to reverse transcribe a challenging transcript, nocturnin (GenBank Accession# NM_012118), which has several regions at >60% GC. GoScript™ reactions were performed at 50°C (as recommended for SuperScript® III) or 42°C (standard GoScript™ reaction condition) prior to endpoint and real-time PCR analyses, respectively. Oligo(dT)-primed cDNAs were analyzed using gene-specific primers for nocturnin and β-2 macroglobulin (B2M), which was amplified as a control. 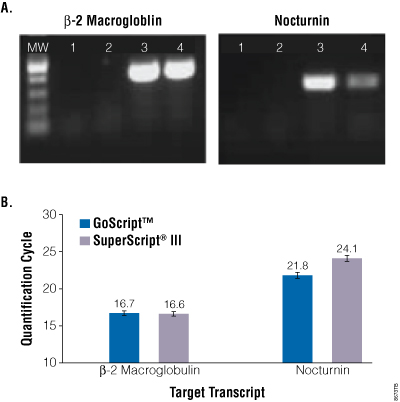 Acknowledgements: Funding was provided by the BMBF-FH3 program/Germany. Reagents were provided by Promega Corporation.