The Evolution of MSI Detection

A Conversation with Dr. Jeff Bacher

Since its discovery in 1993, Microsatellite Instability has been a major interest for molecular oncology researchers, including recent findings that connect MSI status to immunotherapy responses. Dr. Jeff Bacher has been working on the cutting edge of MSI detection every step of the way.

Twenty five years ago, three labs simultaneously discovered a unique mechanism of tumor development. While looking for Loss of Heterozygosity (LOH) in colorectal tumors, they found size shifts in certain PCR bands from non-coding regions taken from tumor and normal adjacent tissue. Upon further investigation, they found many of the bands in question contained microsatellites, specifically polyadenine tracts (1-3). Changes in the sizes of the amplicons were shown to be caused by a deficiency in mismatch repair. The condition was termed “microsatellite instability (MSI),” and soon other labs began searching for MSI in their own cancers of interest. Since then, MSI research has greatly expanded, and recent discoveries relating to the connection between MSI status and immunotherapy response have bolstered the interest.

Promega research scientist Dr. Jeff Bacher has been watching this evolution since that first discovery in 1993. He played an integral role in the creation of the first standardized kit for PCR-based MSI detection and has worked closely with many eminent thought leaders in the field. I sat down with Jeff in the Promega Research & Development Center to chat about the history of MSI research, what he’s working on now, and what he hopes to see in the future.

“I’ve been here [at Promega] twenty-some years,” Jeff tells me. Twenty six, according to his employee profile. Jeff is a laid-back, middle-aged man who talks quickly and doesn’t hesitate to dive into longer explanations of complex topics. He’s trained as a molecular geneticist, with a Ph.D. from Michigan State. As we talk he occasionally leaps up to draw diagrams on a dry-erase board, eager to help me understand the vast range of work he’s done at Promega. 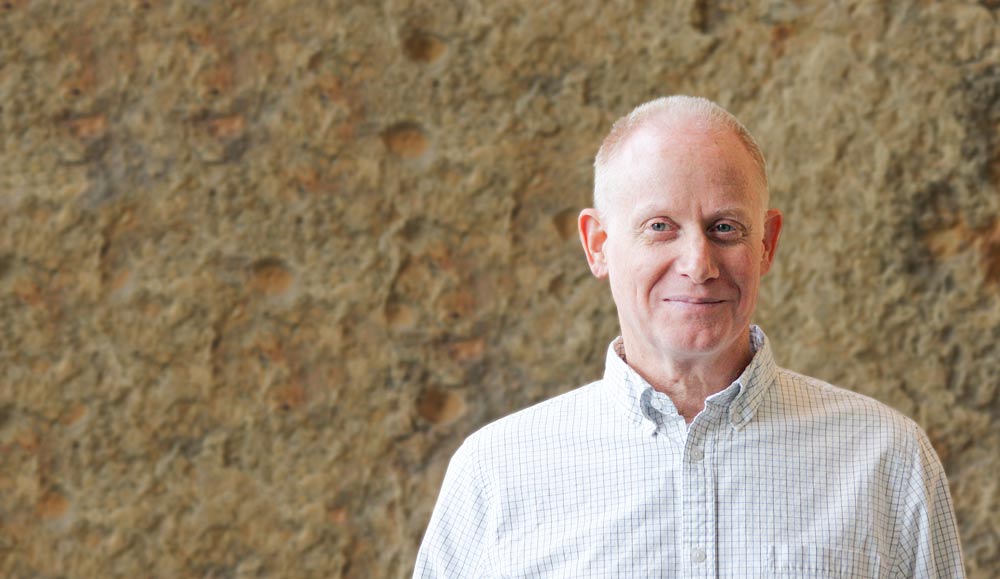 “Pretty much the whole time I’ve been here…Well I’m in Doug [Storts]’s group, and we work with Short Tandem Repeats (STRs). And originally the main push was to develop new markers for forensics. So out of that came some of the pentanucleotide repeats that we still use in the forensic kits,” Jeff says. “At that point, while I was working on that project, there were a lot of papers coming out about MSI. But there were no criteria for what was called MSI, so everybody just used whatever markers they had – there was this huge sort of chaos. They’d take whatever markers they had in the lab and run them on whatever tumor they were interested in. Because of that, in 1994, I started getting interested in detecting MSI in cancer.”

New Markers for MSI Detection
To address the lack of standardized criteria he witnessed in the field, Jeff began working on a new panel of markers for MSI detection. He started with the pentanucleotides that he’d recently worked with in the forensics project. The pentanucleotides were selected for their exceptionally low stutter, which is the effect of slippage during the PCR process. (On an electropherogram, stutter looks like either a poorly defined peak or two adjacent peaks of similar size.) In forensics, the ideal markers show no stutter, because with potentially mixed samples it’s extremely difficult to determine if an artifact in the data is from a PCR error or represents an entirely different person. As it turns out, the low-stutter pentanucleotide repeats used for forensics are actually the worst possible markers for MSI detection.

“They were just not sensitive. When you do PCR, you’re basically amplifying DNA without all the cellular repair mechanisms to remove any errors. So what you get [from PCR] is the same as what you’d find in a cell that’s missing all those repair mechanisms. If you have a marker that shows lots of stutter when you do PCR, then you have a marker that’s gonna be sensitive to MSI, because it’s clearly prone to errors during replication.”

"Wouldn’t this be the dream? To detect cancer in a blood sample? And, of course, it’s still the dream. But I’d say it’s getting closer."

Jeff had to change his perspective to find markers that would be sensitive to MSI. The low-stutter pentanucleotides were clearly poor choices, so he went to the opposite extreme and tested mononucleotide repeats. “And I realized, of course, that mononucleotide repeats were the most sensitive. And about that time, there was an NCI workshop. This is a key historical time point.”

The first NCI-sponsored conference on MSI was held in 1997 in Bethesda, Maryland. From this conference came a seminal paper detailing the first international set of criteria for MSI detection. For the first time, there was a standardized definition of MSI: “a change of any length due to either insertion or deletion of repeating units in a microsatellite in a tumor, compared to normal tissue.” The paper also included a list of the recommended panel of markers, which included BAT-25 and BAT-26 with three dinucleotide markers. That panel became known as the Bethesda Panel (4).

“With all that in mind, we switched over to a panel that had all mononucleotide repeats,” Jeff says. He began testing a number of mononucleotides that he found in GenBank, as well as the best of the Bethesda panel (BAT-25 and BAT-26) and several markers that other researchers had previously identified (5). Through these tests, he assembled the panel of five mononucleotides that would become the foundation of the kit.

Promega released the Microsatellite Instability Analysis Kit in 2004. In addition to the mononucleotide repeats used to compare the microsatellite lengths of tumor and normal adjacent tissue, the kit includes two pentanucleotide repeats for validation. These were chosen because, based on Jeff’s original research in the transition from forensics to MSI, they were the absolute worst markers for MSI he could find. They show low variation and sensitivity to MSI, so they’re included in the kit to help check if both samples being tested are from the same person. If the analysis shows a mismatch between the pentanucleotides, it’s most likely due to sample contamination.

In 2015, over a decade after the original MSI Analysis kit was introduced, interest in MSI research exploded with the publication of the paper “PD-1 Blockade in Tumors with Mismatch Repair Deficiency” in the New England Journal of Medicine (6). Researchers had long understood that cancer patients with MSI generally had a better prognosis than those without. In colorectal cancers (CRCs), for example, where approximately 15% of tumors show MSI, the tumors are generally less invasive and metastatic, less likely to have a KRAS or p53 mutation, and show a better prognosis under typical treatment conditions (1).

Dr. Le and her associates, though, demonstrated that MSI status correlates with an exceptionally strong response to immunotherapy. In a study of the effects of PD-1 blockade in colorectal cancers, only 1 of 33 samples showed a response. Later, the authors discovered a mismatch repair deficiency in this sample. They found that tumors with this deficiency had high infiltration of immune cells directed at neoantigens, but it was counterbalanced by immune inhibitory ligands such as PD-L1, which binds PD-1 to block T cell activation. When PD-1 is blocked, the immune cells can activate and attack the tumor cells. The authors found that patient serum reflected a clinical benefit after even a single dose of therapy (6).

This paper demonstrated the potential efficacy of immunotherapy in CRCs, but more broadly, it proved that evaluating tumor genomes can help guide immunotherapy. This was a large step for personalizing treatment of cancers, and as a result, interest in MSI exploded.

“Now, there are a lot of other approaches people can use to identify patients who will respond to immunotherapy,” Jeff says. “Total mutation burden, PD-1/PD-L1 levels, and just generally looking at immune response of a patient. And there are people who are now doing MSI by NGS [next-generation sequencing]! Some of them do it as a byproduct of a cancer gene panel that just happens to have repeats in it, but they’re still looking for MSI in the repeats of the introns of the genes they’re sequencing. It makes me wonder – would it make sense to do an NGS version of our kit? Well, I won’t get into that here…”

Looking Toward the Future

Today, Jeff is involved in several collaborations to explore further applications of MSI analysis, including tracking patient response to radiotherapy and detecting DNA damage from radiation exposure in astronauts returning from space. He’s also in the process of testing a new panel of markers with researchers from University of Southern California and University of Wisconsin.

“This is kind of my hypothesis, but I think [mismatch repair] is a cumulative thing. Mononucleotides in an environment without MMR, they almost always get deletions. So over time this should result in larger size shifts, and in fact, we see that. Advanced cancers have large shifts, and early cancers have smaller shifts. We don’t really know about the in-between, but I really believe it’s somewhat progressive.”

Colon polyps, for example, historically haven’t been good candidates for MSI analysis. Polyps are pre-cancer, so even with a mismatch repair deficiency, they likely haven’t accumulated large size shifts to be readily apparent. Jeff believes that a new set of longer mononucleotide markers can give enough sensitivity to detect MSI even in these early polyps. So far, his results indicate he’s correct.

When asked about the future, Jeff takes a moment to reflect on the past.

“I remember in the 90’s I had seen this paper by Rick Boland about detecting MSI in blood. And…well, it was just a one-page commentary sort of thing. Wouldn’t it be cool if…Wouldn’t this be the dream? To detect cancer in a blood sample? And, of course, it’s still the dream. But I’d say it’s getting closer.”

Note: This article was updated 9/28/18 to include an additional reference to contributions from scientists outside of Promega.

This article discusses the development and applications of the Microsatellite Instability Analysis Kit.