In this article we compare the DNA extraction performance of the Maxwell® 16 Instrument to the InnuSpeed Bacteria/Fungi DNA Kit and the NucleoSpin® Soil Kit.

Species of the genera Cladosporium, Acremonium, Verticillium, Aureobasidium, Alternaria, Epicoccum and Fusarium are typical representatives of the flora of cereals (1) (2) . Particular attention is paid to the genus Fusarium, because many of the ubiquitous species cause damage and yield reduction in plants by fusariosis, and ingestion of the produced mycotoxins can have toxic effects. Due to the complexity and variability of morphological identification data for Fusarium species, molecular biological methods have become more important in diagnostics. Current efforts focus on the validation and standardization of protocols for DNA isolation, PCR and sequencing as well as data analysis (3) (4) . In particular, the thick cell walls of plant pathogenic fungi can complicate cell lysis for DNA extraction (5) .

The fungal species were incubated for eleven days on potato dextrose agar (PDA) media and approximately 18mg of mycelium were transferred to tubes with beads. The samples for the Maxwell® 16 Instrument and the NuceloSpin kit were mixed with 500µl cetyltrimethylammonium bromide buffer (CTAB) and shaken (2 × 3 minutes) using a vortexer. The InnuSpeed samples were shaken with 100ml distilled water. To each Maxwell® sample, 10µl RNase (10mg/ml), 10µl lysozyme (10mg/ml) and 20µl proteinase K were added (20mg/ml) and incubated for 90 minutes at 65°C with gentle shaking. The DNA was extracted according to the protocol for each kit.

The amount of extracted DNA extracted with each kit was determined using a spectrophotometer (NanoDrop® 1000). The DNA extracted using the Maxwell® 16 instrument were further used for performing the standard PCR protocol of the ‘Bund/Länder’ working group on Genetic Engineering (B/LAG, 2012) and for DNA sequencing.

For most samples tested, we found that the Maxwell® 16 extraction protocol provided higher yields of DNA (Figure 1). In addition, automated extraction with the Maxwell® 16 instrument saved the analyst time (90 minutes). During extraction there was sufficient time to perform other laboratory activities. This is not true for the two manual kits evaluated. Furthermore, the Maxwell® system sped up the extraction process because multiple samples were processed in one run without fluid losses. 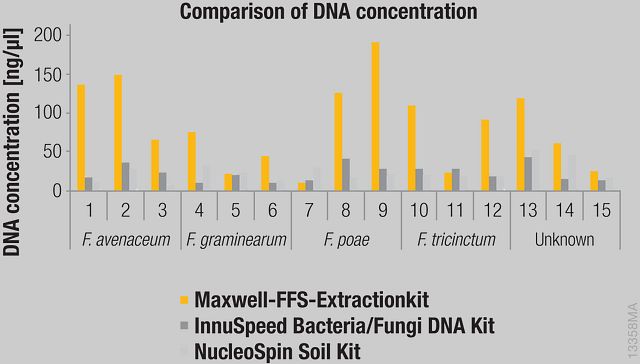 Figure 1. DNA concentration after extraction from mycelia from Fusaria fungi with different methods.

DNA was extracted using the Maxwell® 16 Instrument and a custom kit, the NucleoSpin® soil Kit or the InnuuSpeed Bacteria/Fungi DNA Kit as described in the materials and methods section. The amount of DNA was determined using a spectrophotometer (NanoDrop® 1000 PEQLAB GmbH, Erlangen, Germany). Unknown fungi were later observed as Microdochium nivale and Fusarium langsethiae by sequencing.

We found that DNA could be successfully extracted from environmental fungi samples using the automated Maxwell® 16 system. The system yields a high amount of clean DNA. Following DNA purification, we were able successfully use the DNA in a standard ITS PCR assay and for sequencing analysis.

Maxwell is a registered trademark of Promega Corporation.