Differentiating Mitochondrial Toxicity from Other Types of Mechanistic Toxicity

Mitochondria are responsible for the production of >90% of mammalian cell energy   and are intimately linked to the apoptosis signaling cascade. Additionally, they have critical functions specific to certain tissues including involvement in hemoglobin synthesis, estrogen and testosterone production and cholesterol metabolism (1) .

In spite of the critical roles that mitochondria play in all cells and the many ways they can be adversely affected by chemical compounds, mitochondrial toxicity is difficult to identify. Many of the cell lines used in high-throughput drug discovery screens are highly proliferative, immortalized cell lines that, in the presence of glucose, use glycolysis for energy production, despite abundant oxygen and functional mitochondria, a phenomenon known as the Crabtree effect (3) . As a result these cells tend to be resistant to compounds that disrupt mitochondrial oxidative respiration  (4) (3) . In addition, almost all cells can tolerate diminished mitochondrial membrane potential as long as minimal capacity is maintained; however, when that minimal capacity is lost, cells die rapidly via apoptosis or necrosis, and mitochondrial toxicity is not often identified as the underlying cause of cell death (1) . Often with mitochondrial toxicity there is a lack of correlation between drug dose and toxicity, and toxicity can be missed in clinical trials because it is often highly dependent on individual genetics and organ history (1) .

Mitochondrial toxicity is implicated in the recent post-market withdrawal of several pharmaceuticals: tolcapone, troglitazone, amiodarone and cerivastatin  (2) (1) . Such post-market withdrawals cost dearly in terms of loss of life/health as well as in financial resources, so identifying potential mitochondrial toxins as early as possible in the drug discovery process is highly desirable.

Methods to measure mitochondrial function, such as monitoring oxygen using electrodes, do not lend themselves easily to automation, and are not particularly well suited for drug screening activities, although modifications using soluble electrodes can be used with 96-well plates, increasing throughput. However, these assays still require isolated mitochondria. Isotope-based assays that monitor mitochondrial function by looking at mtDNA replication and protein synthesis are expensive and carry with them the issues of disposal of hazardous waste. Assays using phosphorescent probes to detect mitochondrial respiration have been developed but are used most often on isolated mitochondria (1) . Another group has developed five high-throughput activity assays for oxidative phosphorylation that rely on immunocapture; however, while giving a very complete profile of the precise mode of action of the mitotoxicant, these assays are used with isolated mitochondria rather than intact cells and therefore may not be the best option for early-stage drug screening activities (2) .

One way to induce immortalized cell lines to switch to oxidative phosphorylation so that mitochondrial toxicity can be more readily detected is to conduct the toxicity assays on cells grown under conditions that shift the metabolic balance toward oxidative phosphorylation. Using HepG2 cells, which have high glycolytic activity and are resistant to mitochondrial toxins under typical high-glucose culture conditions, Marroquin et al. showed that by growing HepG2 cells in galactose medium the cells were sensitive to drugs known to disrupt mitochondrial function (4) . Indeed growing cell lines on galactose-containing and glucose-containing media in parallel for toxicity screens to detect mitochondrial toxins is becoming more common in drug screening activities (Figure 1). For assays that measure ATP output, comparing results for the cells in the two different growth conditions allows researchers to see decreases in ATP output that are only associated with growth in galactose-containing medium, and therefore probably a result of mitochondrial dysfunction. 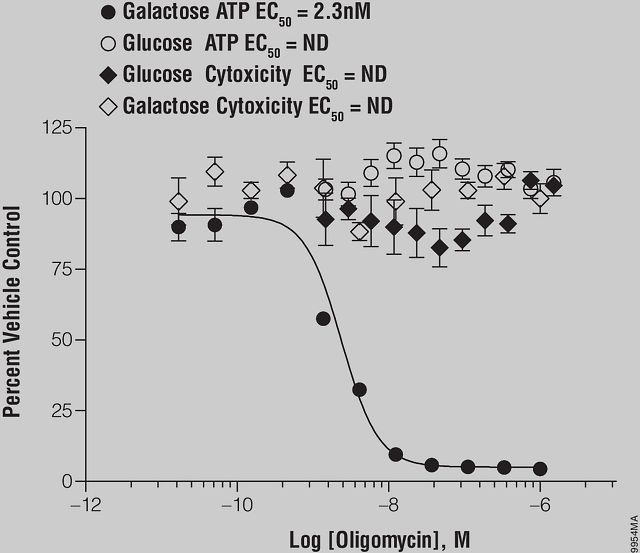 Figure 1. Mitochondrial responsiveness to a model mitochondrial toxin in the presence of galactose or glucose.

Some cells treated in the presence of glucose may preferentially rely on glycolysis to meet bioenergetic needs and are therefore relatively unresponsive to mitochondrial toxins (Glucose ATP). Cells treated in the presence of galactose must use oxidative phosphorylation to generate ATP and are therefore more responsive to mitochondrial perturbation (Galactose ATP). Oligomycin treatment did not cause changes in membrane integrity in either formulation of medium (Galactose Cytotoxicity and Glucose Cytotoxicity). Shown are data from K562 cells at 10,000 cells/well in a white Costar® 96-well plate. The cells were exposed to oligomycin for 2 hours.

Creating a cell-based assay to monitor mitochondrial toxicity that overcomes the difficulties in specifically detecting compounds that have deleterious effects on mitochondria remains an essential task for early-stage drug discovery. The Mitochondrial ToxGlo™ Assay, when combined with the galactose cell culture conditions described by Marroquin et al. (4) provides such a solution (5) . The Mitochondrial ToxGlo™ Assay is a cell-based assay method that employs a sequential-addition, multiplexed assay chemistry for predicting potential mitochondrial dysfunction as a result of xenobiotic exposure (Figure 2). The assay is based on the differential measurement of biomarkers associated with changes in cell membrane integrity and cellular ATP levels relative to vehicle-treated control cells during short exposure periods. Cell membrane integrity is first assessed by measuring the presence or absence of a distinct protease activity associated with necrosis using a fluorogenic peptide substrate (bis-AAF-R110) to measure "dead-cell protease activity". The bis-AAF-R110 Substrate cannot cross the intact membrane of live cells and therefore gives no signal with viable cells. Next, ATP is measured by adding an ATP detection reagent, resulting in cell lysis and generation of a luminescent signal proportional to the amount of ATP present. The two sets of data can be combined to produce profiles representative of mitochondrial dysfunction or nonmitochondrial-related cytotoxic mechanisms. 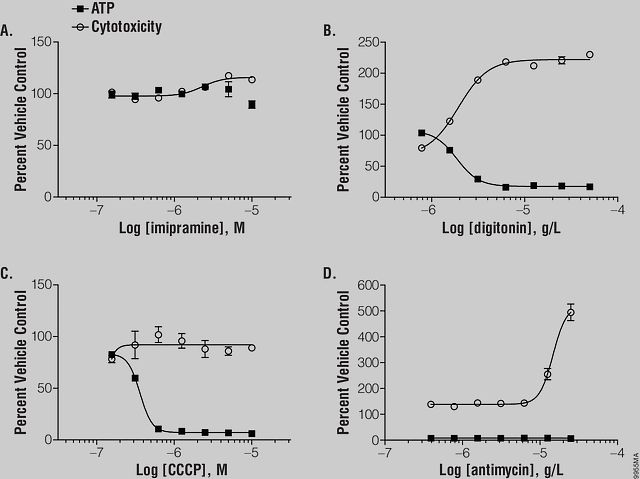 Incorporating high-throughput assay chemistry that can detect mitochondrial dysfunction early in drug discovery programs provides the opportunity to identify potential mitotoxicants before they reach clinical trials or the market population.