Since the 1960s, scientists have used gel electrophoresis to separate nucleic acids by size, and ethidium bromide has been used to stain and visualize nucleic acids post-electrophoresis (1) . We have previously shown that the Diamond™ Nucleic Acid Dye is a sensitive dye that can be used to visualize a wide array of concentrations and sizes of both DNA and RNA post-electrophoresis with the same equipment (2) . Safe use of laboratory reagents is extremely important, and there is a growing movement to reduce the amount of toxic reagents used day-to-day in the lab.

Ethidium bromide is an interchelating agent with known mutagenic properties. The Diamond™ Nucleic Acid Dye, on the other hand, is a fluorescent agent that binds to the grooves in the helical structure(s) of nucleic acids. In this study, the mutagenicity (genotoxicity) of the Diamond™ Nucleic Acid Dye was determined and compared to that of ethidium bromide using the Ames MPF™ Assay, a test that has been used to determine mutagenicity of chemicals since the early 1970s and is still widely used today.

Toxicity testing was performed by Apredica (Watertown, MA), a contract research division of Cyprotex, using the Ames MPF™ Assay (3) . Compound stocks (Diamond™ Nucleic Dye and Ethidium Bromide) were provided to Apredica, and subsequently diluted 1:25 in PBS, then serially diluted 1:10 across 6 doses for assay in triplicate in the mini Ames MPF™ Assay. Diamond™ Nucleic Acid Dye required an additional initial 1:10 dilution into PBS to achieve a soluble stock for testing.

Two bacterial strains were tested: Salmonella typhimurium carrying mutations in the operon for histidine biosynthesis; 1) strain TA98 (frameshift mutation) and 2) strain TA100 (base-pair substitution). Strains were tested in the absence and presence of S9 rat liver extract for metabolic activation, which can convert some chemicals to mutagens. Bacteria were incubated with the compounds in media with minimal histidine for 90 minutes (sufficient for 2 generational doublings), then transferred to histidine-free media and cultured for an additional 48 hours. Natural revertants were monitored without compound (vehicle-only control), n=9. In accordance with the Ames MPF™ Assay, bacteria were incubated in liquid culture in the presence of a colorimetric pH indicator. A change in pH was indicative of bacterial growth and monitored by spectrophotometry.

We evaluated the potential toxicity of the Diamond™ Nucleic Acid Dye using the Ames MPF™ Assay and compared the results to those of ethidium bromide, a known carcinogenic and mutagenic nucleic acid stain. We used a 1:10 dilution series to encompass the recommended usage concentrations for both dyes.

Ethidium bromide is typically available at a 10mg/ml stock and used for gel staining at ~0.5µg/ml. It has been shown to be mutagenic by Ames testing (3) . It was cytotoxic (inhibited all background growth) at the highest doses tested and genotoxic within the range of typical usage concentrations (Figure 1). 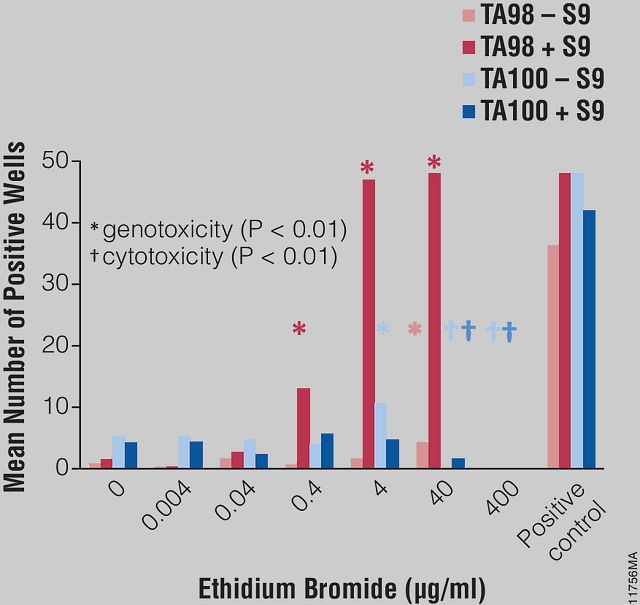 Figure 1. Ethidium Bromide toxicity measured by the Ames MPF™ Assay. Each compound dose was tested with 2 bacterial strains (TA98 and TA100) in the absence and presence of S9 rat liver extracts. Average of triplicate samples shown.  Doses within the typical usage range are indicated (0.4 and 4µg/ml). Compound doses were compared to vehicle control baseline (n=9). Doses showing significant growth above (genotoxicity) or below (cytotoxicity) baseline are indicated (as determined by P<0.01 by unpaired, 1-sided T-test).

The Diamond™ Nucleic Acid Dye also is supplied highly concentrated with a recommended usage dilution of 1:10,000. As a concentrated stock, the Diamond™ Nucleic Acid Dye was also cytotoxic, but at the recommended usage dilution, no toxicity was detected (Figure 2). Some genotoxicity was detected at an intermediate dilution (1:1,000), but only at 7% of the level measured for ethidium bromide. 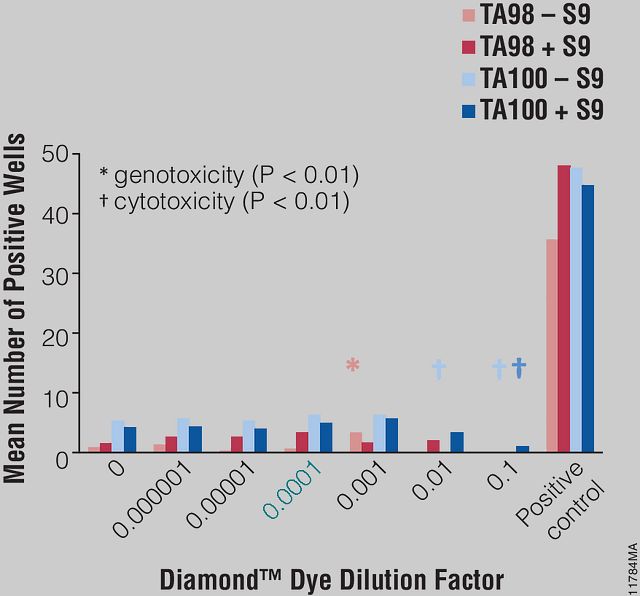 The Diamond™ Nucleic Acid Dye is not detectably genotoxic or cytotoxic at the 1:10,000 dilution recommended for gel staining, as determined by the Ames MPF™ Assay. This is unlike ethidium bromide, which is genotoxic at typical usage concentrations (0.5 µg/ml). Both dyes are cytotoxic, however, at commercially available stock concentrations. These data indicate that Diamond™ Nucleic Acid Dye is significantly less toxic than ethidium bromide within the typical concentrations used to stain gels.

Diamond is a trademark of Promega Corporation.