Nucleic acid quantitation is a critical step in sample preparation that helps ensure optimal performance of downstream assays. A common misconception is that all quantitation methods are alike and have similar accuracy. But in fact, concentration estimations can differ depending on what method is used. Thus, it is crucial to understand the basis of each method so you can choose the most suitable one for your need. This article describes the principles, advantages and limitations of the three most common methods for DNA or RNA quantitation: spectrophotometry, fluorescence and real-time PCR.

With the growing breadth and capability of advanced assays now available to scientists, the progress of genomics research is becoming limited less by the available tools of molecular biology, and more by the questions to which they are answering. Progress in applications such as genotyping, copy number variation (CNV) analysis, pathogen identification, gene expression analysis, biomarker discovery, cytogenetic and molecular oncology profiling, have been advanced by continued improvements in technologies such as qPCR, microarrays and sequencing.

There are numerous components of the sample preparation workflow that can present challenges to the performance and reproducibility of these downstream assays.  From sample acquisition and storage to nucleic acid extraction and quality control, variation may be introduced in ways both obvious and inconspicuous. This article focuses on one often over-looked, yet critical, aspect of quality control: nucleic acid quantitation.

Results from even commonly-used technologies, such as real-time PCR, can be challenging to reproduce, making it difficult to draw conclusions from a particular experiment. Quantitating nucleic acid samples is important for the successful outcome of these assays in several ways:

There are several common laboratory techniques used to estimate nucleic acid sample concentration. A common misconception, however, is that all these methods have similar accuracy or even measure the same thing: how much DNA or RNA is in the sample. In fact, every method measures something different. Depending on what method you choose, contamination or or other issues can lead to an inconsistent estimation of concentration.

The Beer-Lambert Law relates the absorption of light to the properties of the material through which the light travels. This law states that there is a logarithmic dependence between the transmission of light through a substance and the product of the absorption coefficient of the substance and the path length (Figure 1). For DNA and RNA, the heterocyclic rings of nucleotides (adenine, guanine, cytosine and thymine/uracil) result in nucleic acid molecules absorbing ultraviolet (UV) light maximally at 260nm (λmax = 260nm).

Figure 1.  Beer-Lambert Law for calculating concentration of an analyte by UV absorbance.

The Beer-Lambert law can be used with the appropriate extinction coefficients to determine nucleic acid concentration.

For most commercial instruments, reliable spectrophotometric quantification (A260) readings lie between 0.1 and 1.5. On a spectrophotometer with a 1cm path length, the theoretical dynamic range for DNA would equate to 5–75ng/µl. The NanoDrop®-2000 instrument claims a path length as low as 0.05mm (0.005cm) enabling a theoretical dynamic range of 2–15,000 ng/µl. While this range allows detection of high dsDNA concentrations, the low end range of 2ng/µl (5) is not very sensitive when you consider the low concentration of nucleic acids found in many common sample types (e.g. plasma, cerebrospinal fluid, urine, fine needle aspirates, laser capture microdissection, single cells and FFPE tissue, etc.) Accuracy is also a major concern for UV spectrophotometry. While nucleic acids absorb maximally at 260nm, other common contaminants absorb strongly at wavelengths near 260nm. Solvents such as guanidine and phenol, as well as salts, have maximal absorbance around 230nm, while proteins contribute at 230nm and 280nm. These neighboring peaks, if present in a sample, will inflate the reading at 260nm. Furthermore,  dsDNA, ssDNA, RNA, free nucleotides and primers cannot be discriminated from each other in a sample (5; Figure 2).

Figure 2. RNA contamination in a DNA sample leads to overestimation of DNA concentration by UV spectrophotometry. DNA extracted from K562 cell culture was spiked with RNA. Panel A. Two independent samples were run on an agarose gel with (+) or without (-) RNase to visualize presence of each nucleic acid species. Panel B. Non RNase-treated DNA samples (-) were quantitated by UV-spectrophotometry using a NanoDrop® instrument and QuantiFluor® dsDNA Dye, a more specific, fluorescent dye-based method.

Fluorometry, otherwise known as spectrofluorometry (herein referred to simply as fluorescence) is another type of electromagnetic spectroscopy which analyzes the light emitted from fluorogenic molecules called fluorophores. Fluorophores respond distinctly to light compared to other molecules. When a photon of excitation light is absorbed by an electron of a fluorophore, the energy level of the electron rises to an excited state. During the short excitation period, some of the energy is dissipated and the remaining energy is emitted as a photon to relax the electron back to the ground state. Because the emitted photon usually carries less energy and therefore has a longer wavelength than the excitation photon, the emitted fluorescence can be distinguished from the excitation light with a fluorometer (Figure 3). 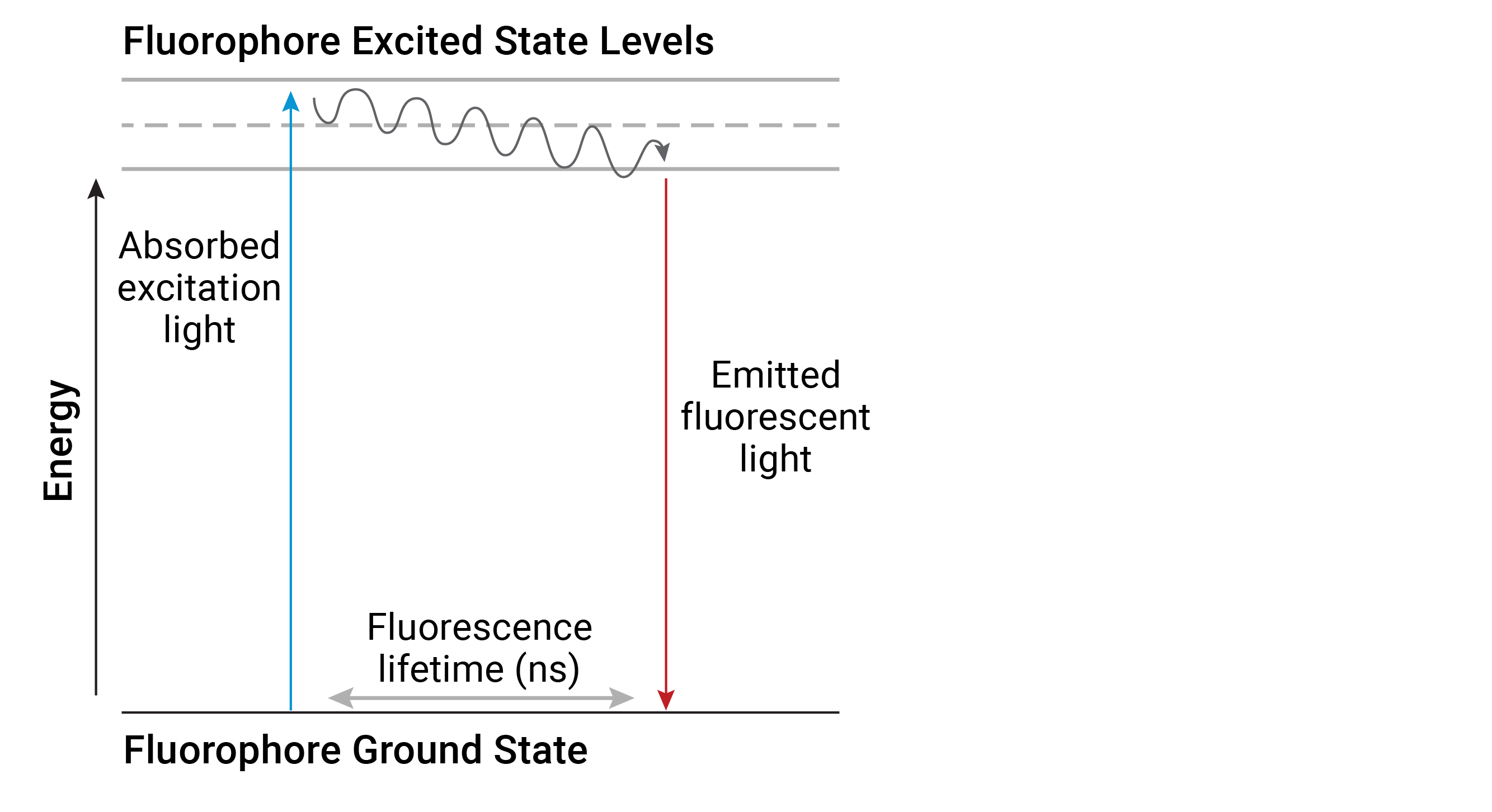 Fluorescence dye-based quantitation methods take advantage of this mechanism by employing dye molecules that have been designed to preferentially bind a given species of nucleic acid. When a dsDNA dye, for example, is excited by a given wavelength of light, only dye in the dsDNA-bound state will fluoresce. As the dye binds to the target nucleic acid, fluorescent quantum yield increases as a function of shift in fluorophore molecular geometry. This aspect of the fluorescence quantitation technique, in conjunction with preferential dye:target binding, results in a low background signal, high accuracy and specificity, making it ideal for quantitation of low-level nucleic acid samples (Figure 4). 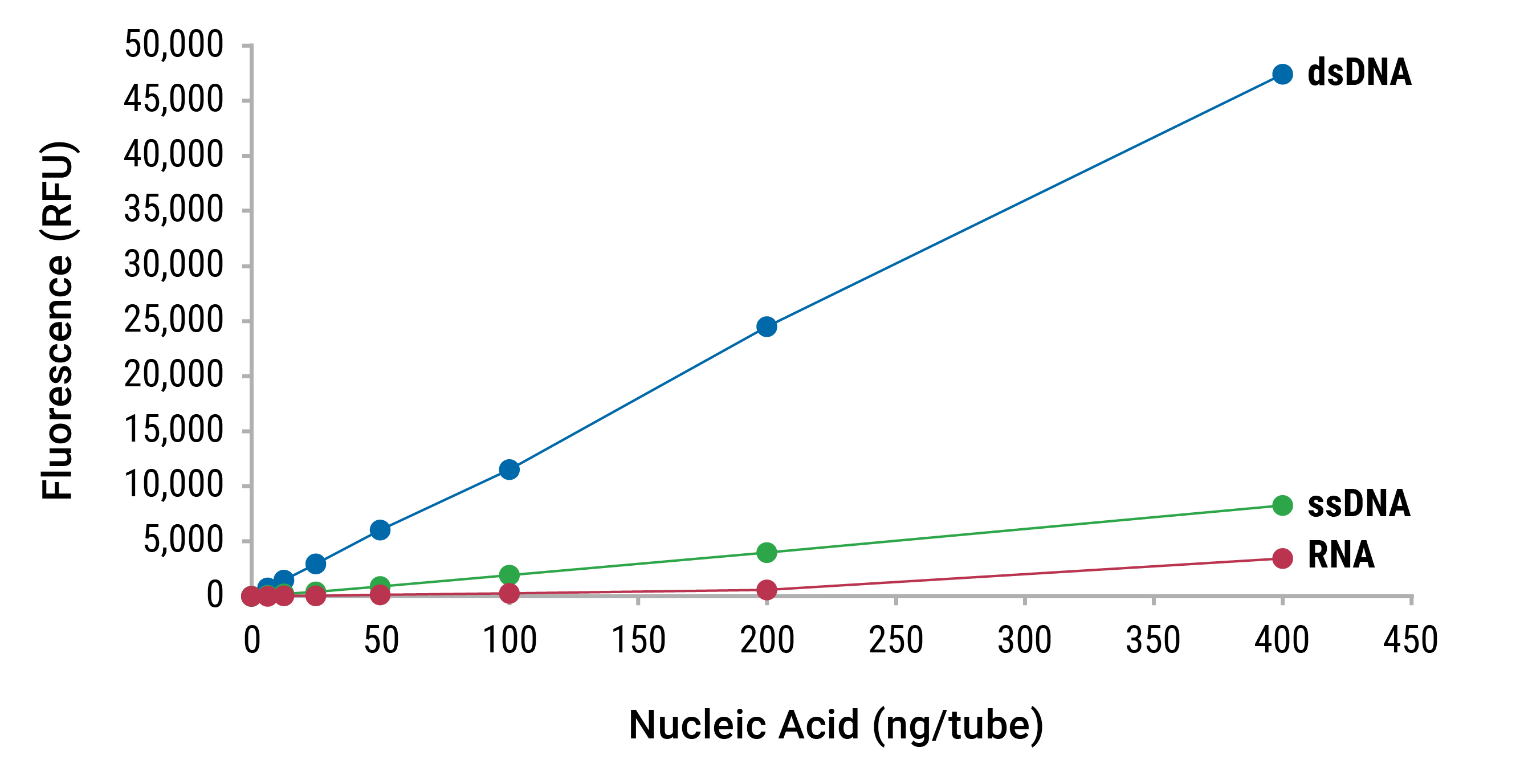 Figure 4. Fluorescence-based quantitation demonstrates a large quantitative dynamic range and preferential detection of target over other nucleic acid species. Top Panel. Representative standard curve for the QuantiFluor® ONE dsDNA System enables quantitation over 0.2–400ng. Bottom Panel. In a dsDNA assay, fluorescent signal is due predominantly to dsDNA even in the presence of equimolar amounts of ssDNA and RNA over the full dynamic range of the assay (0.2–400ng/µl).

For this type of assay to be quantitative, a dilution series of sample of known concentration is used to create a standard curve. A fluorometer is used to read and record the relative fluorescence units (RFUs) for each point of the curve. These data will form a regression curve that can be used with either linear (y=mx+b) or power (y=axb) fit analyses to interpolate the concentration of any unknown sample.

Compared to UV spectrophotometric methods, fluorescence demonstrates improved specificity because it is less affected by other components present in samples. As a result, fluorescent methods lead to a more accurate determination of nucleic acid concentration (Figure 5). 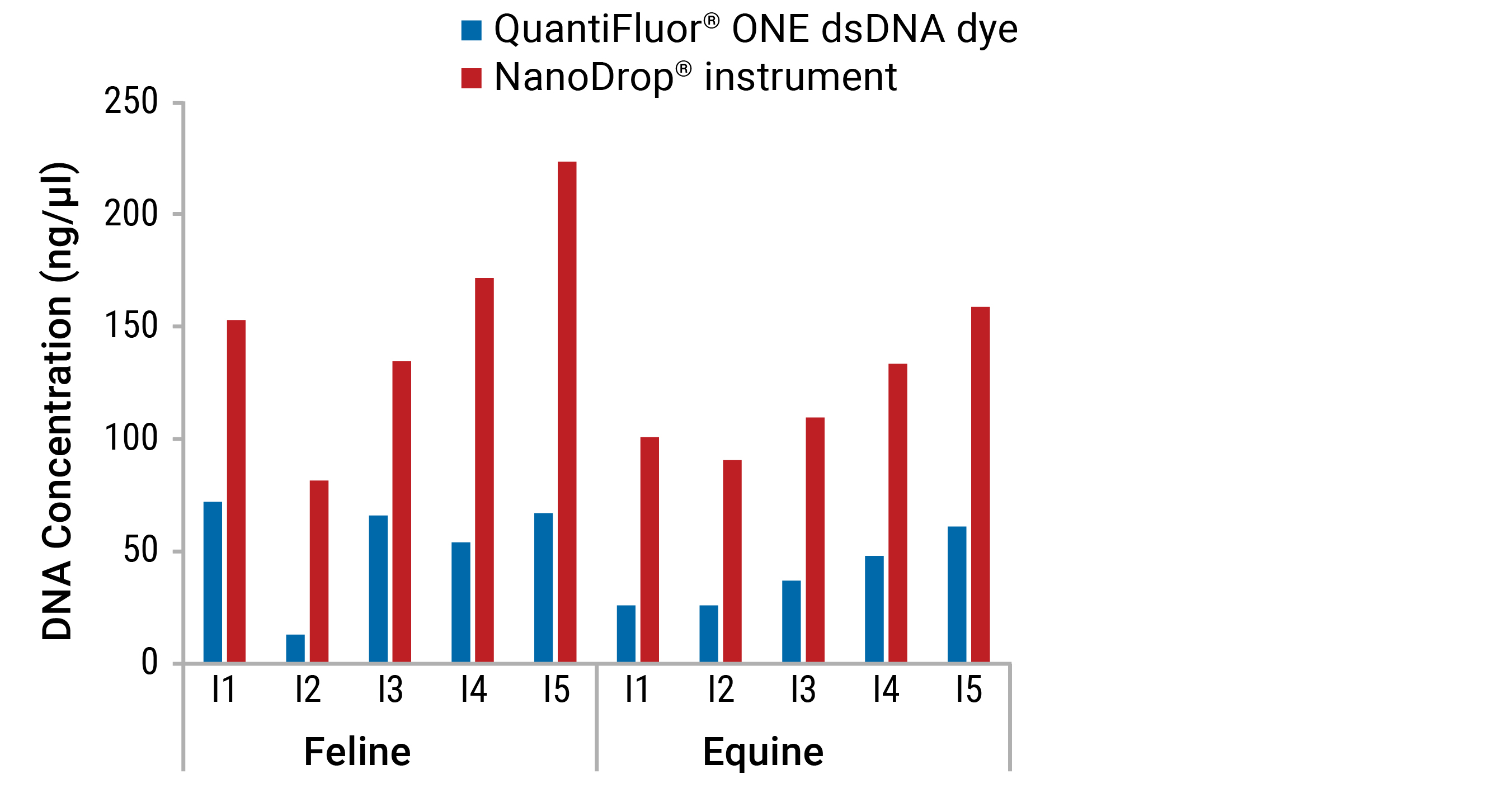 Real-time PCR (also known as qPCR) is a technique that relies on thermal cycling consisting of repeated cycles of heating and cooling for DNA melting and enzymatic replication of targeted amplicons by DNA polymerase. After n rounds of thermal cycling, a total of 2n PCR products are formed. Detection instruments measure the accumulation of DNA product after each round of PCR amplification using fluorescent reporters. The reporters can be either dyes like SYBR® green or probes such as TaqMan®. RNA can be measured with the same process following a preliminary reverse transcription (RT) step converting it to cDNA.

The primary data from a real-time PCR experiment is an amplification curve, which shows the fluorescent signal in relative fluorescent units (RFUs) versus the cycle number and charts the accumulation of amplified product. The baseline is measured early in the amplification process before the instrument can detect product formation. As product accumulates, it reaches a point where the instrument is able to detect the change in signal above the background level--this is the exponential portion of the curve. An unknown sample concentration can be estimated from its corresponding Cq number when compared to a standard curve of Cq values from samples of known concentration (Figure 7). Figure 7. Example standard curve for a real-time PCR experiment. Cq values of titrated standards are plotted versus their corresponding concentration. The Cq values of any unknown samples can be interpolated from this curve by linear regression.

The real-time PCR strategy of quantitation offers several advantages over other methods:

Because real-time PCR exploits the enzymatic replication of DNA polymerase, it only measures those molecules that are amplifiable. The implication is that highly degraded samples and fragments that won’t amplify in a downstream assay also won’t contribute to a concentration estimate. 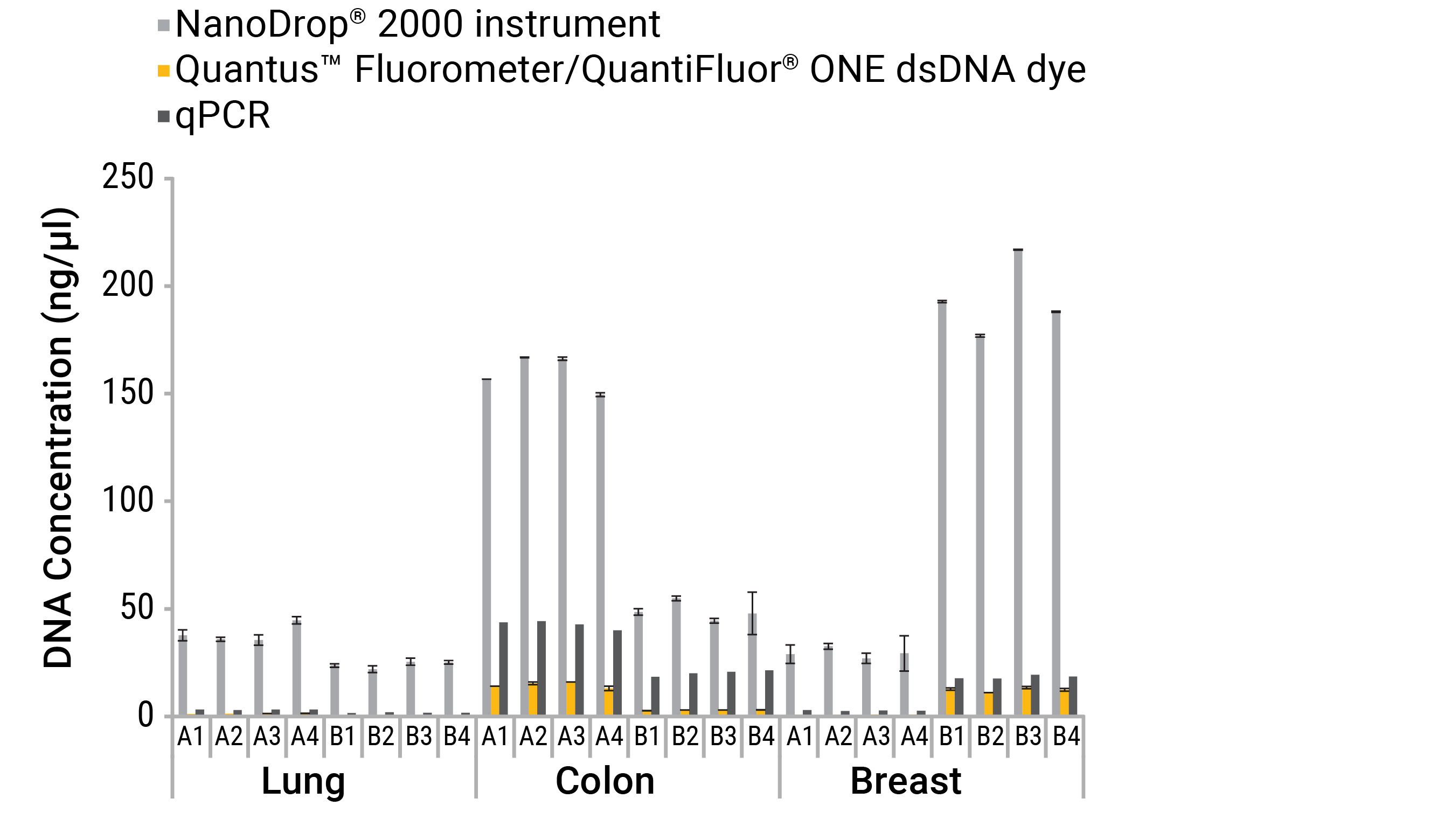 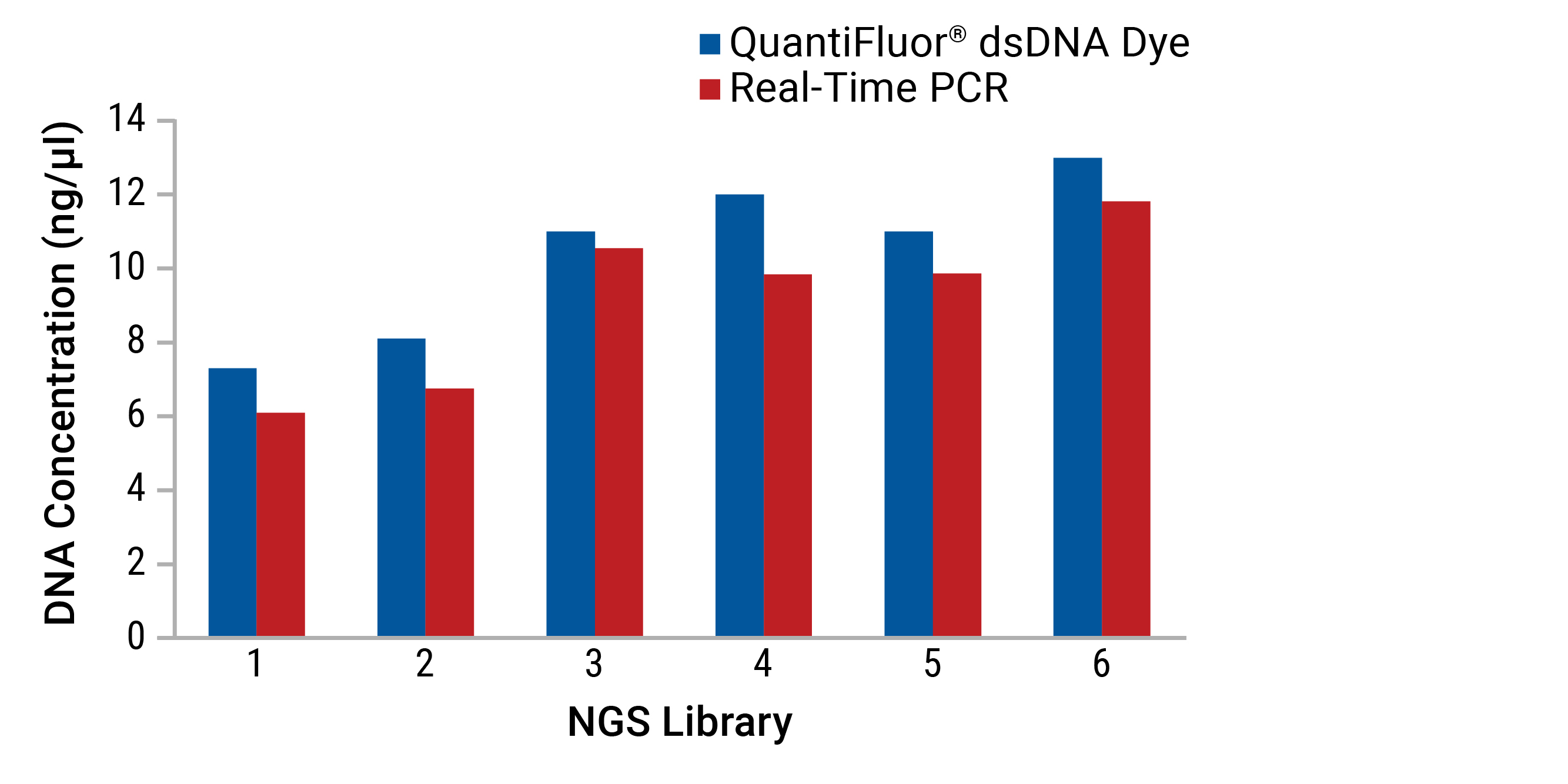 While quantitation is but one small step in the multifaceted nucleic acid sample preparation workflow, it can have large implications on performance and validity of conclusions drawn from downstream assays. Best practice guidelines such as MIQE (1), MIAME (5) and MIGS (6), among others, recognize the importance of quality control steps such as quantitation. These guidelines call into consideration that the right technique be used and reported in publications. This ensures that experiments are reproducible and the conclusions are sound. Currently, fluorescent dye-based methods are most commonly recommended for determining sample concentration prior to normalization exercises and loading into advanced downstream analyses. This technique represents a happy medium between the rigors demanded of quantitation methods and the practicality of incorporating it into a workflow. Each of the methods discussed here have their merits and appropriate uses (Table 1). It is ultimately up to each researcher to evaluate what is being measured for a given quantitation technique and choose the method most appropriate for the task at hand.

Table 1. The pros and cons of common quantitation methods.