Once gel electrophoresis became widely accepted, researchers typically poured their own agarose gels, dissolving and melting agarose into buffer and allowing it to solidify in a glass or plastic form. Commercially available DNA ladders, or markers, aided scientists in accurately sizing their DNA fragments. These markers  were frozen fragments of DNA, and for use on agarose gels, required the addition of  a loading dye prior to loading into the gel.

Many scientists now have turned to precast, ready-to-use gels to shorten their DNA-based workflow. DNA markers also have evolved, with options for a variety of fragment sizes, premixed loading dye, and stability at room temperature.

The BenchTop DNA Markers from Promega offer a convenient and easy means to determine the size DNA fragments on agarose gels. These DNA markers are supplied in a stabilizing solution of 1X Blue/Orange Loading Dye, so there is no need to add a separate loading dye. The BenchTop DNA Markers also are stable at room temperature (22–25°C), eliminating the need to thaw the markers prior to use.

We have evaluated the performance of the Promega BenchTop DNA Markers in the Invitrogen eGel® System and have determined that they are compatible, offering researchers increased flexibility in their use.

Ladder/Marker Preparation: Each BenchTop DNA Ladder or Marker was mixed with water to a final volume of 20µl (Table 1).

Gel analysis: A volume of 20µl of prepared ladder or marker was added to wells of various agarose gels, with 20µl of water loaded in "empty" wells. All gels were run at 60 volts for approximately 30 minutes.

The Promega BenchTop 1kb DNA ladder was separated on both a 0.8% eGel® and 0.8% standard agarose gel (Figure 1). The ladder was run in duplicate and visualized with ethidium bromide. All known molecular weight bands can be observed on both gel types. 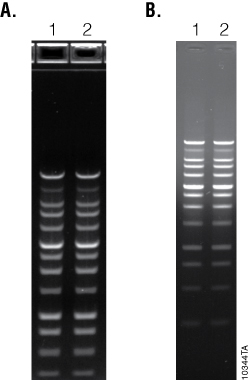 The Promega BenchTop 100bp DNA Ladder along with three other BenchTop markers from Promega were separated on both a 2% eGel® and a 2% standard agarose gel (Figure 2). The ladder was run in duplicate and visualized with ethidium bromide. All known molecular weight bands can be observed on both gel types.

Promega BenchTop DNA Markers are compatible with the eGel® System from Invitrogen. The direct-loading capability, coupled with room temperature stability and precast gel compatibility make the BenchTop DNA Markers a convenient and reliable means to accurately determine the size of DNA fragments on an agarose gel.