Development of the PowerPlex® 21 System

As human identification through the use of STR genotyping continues to expand and mature, new typing systems are needed to meet the evolving needs of the human identification community. In Europe, the US and China, STR typing is moving to include more loci to aid discrimination. With these changes, larger multiplexes are required to satisfy locus selection within different regions. In addition to a need for greater discrimination, there is a demand for robust systems to handle more difficult samples in forensic casework as well as a need to process database samples with less upfront preparation. Increased robustness means higher success for forensic casework and faster processing time for offender databasing and paternity testing.

As databases grow in size, the potential for adventitious matches increases. Some early STR databases built with only ten loci have been recognized as insufficient to avoid these unrelated matches once millions of profiles were included in the databases. Another challenge is data sharing between regions that use different STR multiplex products that do not contain the same loci, leading to differences in database composition. 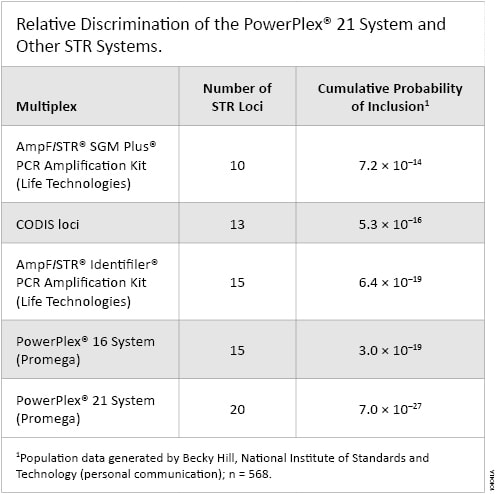 Table 1. Relative Discrimination of the PowerPlex® 21 System and other STR systems.

Forensic evidentiary samples often contain substances that inhibit PCR. Even following a DNA purification step, these inhibitory components can persist, decreasing the likelihood of STR amplification success. In 2009, Promega introduced the PowerPlex® 16 HS System (1) , which demonstrated a significant increase in inhibitor tolerance over previous STR multiplexes. The PowerPlex® 21 System improves on the PowerPlex® 16 HS System performance for even greater inhibitor resistance (Figure 2), resulting in more interpretable data and less need for re-amplification of samples previously deemed "difficult" due to the presence of inhibitors.

The advent of direct amplification from FTA® cards has increased demand for faster processing of database, reference and paternity samples. The PowerPlex® 21 System builds on recent advances in Promega STR chemistries, including faster cycling time and direct amplification from FTA® cards. Additionally, the release of this multiplex will be accompanied by new, rapid solutions for swabs and nonFTA cards (SwabSolution™ Kit and PunchSolution™ Kit, respectively). With the new advances, the PowerPlex® 21 System can amplify DNA from a variety of sample types, including difficult casework samples, and is compatible with direct amplification from FTA® card punches as well as pretreated swabs, Bode Buccal Collector™ devices or S&S 903 punches (Figure 3). Finally, rapid cycling technology reduces thermal cycling by as much as two hours. These features combine to reduce sample-to-analysis time for all samples using the PowerPlex® 21 System.

The PowerPlex® 21 System provides greater discrimination for STR analysis of both casework and database samples than possible with previous multiplexes. Significant labor savings can be realized through simplified protocols for common database and paternity sample types. Increased inhibitor tolerance allows greater success from the most challenging casework samples. Rapid cycling technology ensures that turnaround time for any application is reduced. Finally, in a time of increased data sharing and rapid expansion in the number and size of databases, the PowerPlex® 21 System offers markers used in forensic labs, and found in databases, around the world providing exceptional discrimination to help resolve even more cases.