Recently, the STR-typing community has begun to adopt the concept of “direct amplification” from unpurified samples on FTA® cards. Significant time and labor savings can be achieved by eliminating DNA purification and amplifying samples directly from buccal or blood samples on FTA® cards. Another time-consuming process is the PCR itself—often three hours or more. The duration of this step often dictates daily workflow for laboratories, and when combined with DNA purification and capillary electrophoresis, the process often requires more than one day. Although thermal cycling is a hands-off step, decreasing sample time on an instrument with rapid amplification allows samples to be processed in a single day. 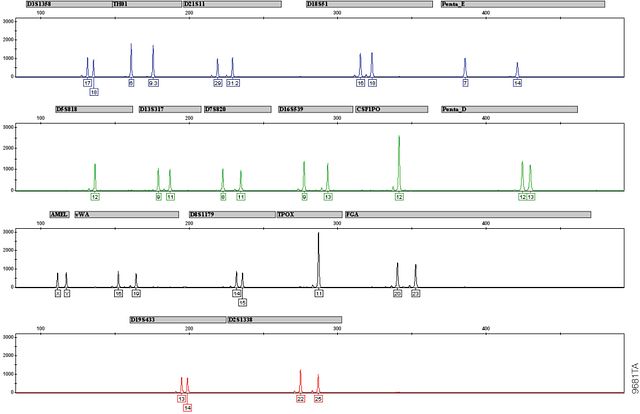 Five nanograms of 2800M Control DNA was amplified for 27 cycles on a GeneAmp® PCR System 9700 using the PowerPlex® 18D System. Samples were analyzed using a 3kV, 5-second injection and a 1,500-second run time on an Applied Biosystems 3130xl Genetic Analyzer.

A buccal sample was collected and immediately transferred to FTA® paper. Reactions were set up using one (Panel A) or two (Panel B) 1.2mm punches from the same card. Amplifications were performed using 27 cycles on a GeneAmp® PCR system 9700. One microliter of amplified sample was analyzed using a 3kV, 3-second injection and 1,500-second run time with the G5 dye set on an Applied Biosystems 3130xl Genetic Analyzer.

Whole blood (125µl of K2 EDTA-anti-coagulated blood) was spotted onto FTA® paper. Reactions were set up using one 1.2mm punch and amplified using 27 cycles on a GeneAmp® PCR system 9700. One microliter of amplified sample was run with a 3kV, 3-second injection and 1,500-second run time with the G5 dye set on the Applied Biosystems 3130xl Genetic Analyzer.

With direct amplification, sampling can affect results more than with standard amplifications. Although a typical 1.2mm punch contains sufficient material for successful amplification, the distribution of sample across an FTA® card varies, most notably with buccal samples. Indicating FTA® cards help locate a buccal sample on the card and, therefore, the ideal area to punch. However, indicating cards only show where the surface was wetted. Wetted but bare areas of the card could exist, and sampling from those areas will not result in amplification. Failures due to bare punches can be resolved by including two punches per reaction, increasing the probability that the reaction contains at least one sample-covered punch and increasing first-pass success rates. As shown in Figure 5, only a slight increase in peak height may be seen for reactions with two punches compared to those with one punch. However, the PowerPlex® 18D System can accommodate two buccal punches. For blood samples on FTA® cards, one punch is recommended. The use of two blood punches is not necessary, as sample distribution is clearly visible and generally more consistent than buccal punches (Figure 5). In many cases, the use of two FTA® punches when working with blood on FTA® cards can actually result in poorer results due to an increase in PCR inhibitors associated with blood samples on FTA® paper. 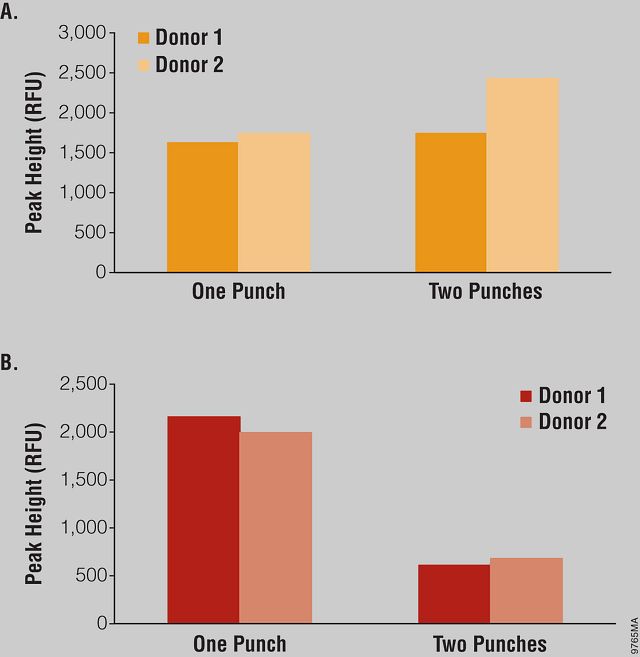 Figure 5. Signal from one or two FTA® punches.

Previous commercial STR kits were optimized for older thermal cycling technology and performance of the enzyme available at the time. Cycle times generally approach or exceed 3 hours (Figure 6). Consequently, processing each plate of samples from sample to analysis, including extraction, cycling and capillary electrophoresis (CE) analysis, requires more than one day. Thermal cycling time for the PowerPlex® 18D System is less than an hour and a half using a simple, two-step cycling program (Figure 6). With direct amplification, samples that are punched in the morning are immediately ready for PCR. Less than 2 hours later, those same samples are ready to be placed on the CE instrument. This simplified process reduces total hands-on time as well as the number of manipulations required, saving staff resources and reducing the chance of error.

The PowerPlex® 18D System was developed to simplify and accelerate STR typing for database and paternity testing. With 18 loci the system is compatible with existing databases, allowing maximum data sharing between CODIS laboratories and future results to build on those databases. In addition to significant time and labor savings through robust direct amplification and rapid PCR, the PowerPlex® 18D System has the flexibility and performance to accommodate the sample types currently submitted to laboratories and successfully meet laboratory goals. Consequently, the PowerPlex® 18D System is an effective option to increase lab efficiency and simplify sample process workflow.