This article describes an alternate protocol for creating transfection mixtures using ViaFect™ Transfection Reagent in which the reagent:DNA complexes are formed in a lower volume compared to the standard protocol. Two reporters were used to monitor transfection efficiency, luciferase and GFP, and the health of the cells was also measured for each transfection condition. This method offers improved transfection efficiency in some cell lines, including HEK293 cells, and enables reduction in the amount of reagent required for others, while still maintaining the health of the cells during the process.

When introduction of DNA into cells is needed, a reproducible, efficient transfection process with minimal impact on cell health is required for optimal results. Maximizing the efficiency of this process can help reduce the amount of DNA and reagent consumed, further improve data and enable assay expansion into additional cell models. Lipid-based transfection is a commonly used method of introducing DNA into the cell. In this method, the reagent associates with the DNA to create a reagent:DNA complex which can then pass through the cell membrane delivering the DNA to your target cell. The method by which these complexes are formed is a critical part of any lipid-based transfection protocol. This article describes an alternate protocol for creating transfection mixtures using ViaFect™ Transfection Reagent in which the reagent:DNA complexes are formed in a lower volume compared to the standard protocol. Two reporters, luciferase and GFP, were used to monitor transfection efficiency. Cell health was also measured for each transfection condition. This method offers improved transfection efficiency in some cell lines, including HEK293 cells, and enables reduction in the amount of reagent required for others, while maintaining cell health during the process.

Plate cells at 1 × 104 cells in 100µl and incubate overnight at 37°C with 5% CO2 so that they will be approximately 75% confluent on the day of transfection. Due to differences in growth rates, confluence is variable between cell lines. Plate K562 cells at 1 × 104 in 100µl at the time of use (no overnight incubation needed).

a. Dilute DNA by adding OptiMEM™ media and DNA to a microfuge tube. Vortex to mix.
Note: Adjust total volume of diluted DNA for the appropriate number of wells being transfected.
b. To a microfuge tube or a V-bottom plate, add 10µl of diluted DNA.
c. Add ViaFect™ Transfection Reagent and mix by pipetting.
d. Incubate for 10 minutes at room temperature.
e. Dilute complexes with OptiMEM™ media to reach a final volume of 100ul and pipette gently to mix. 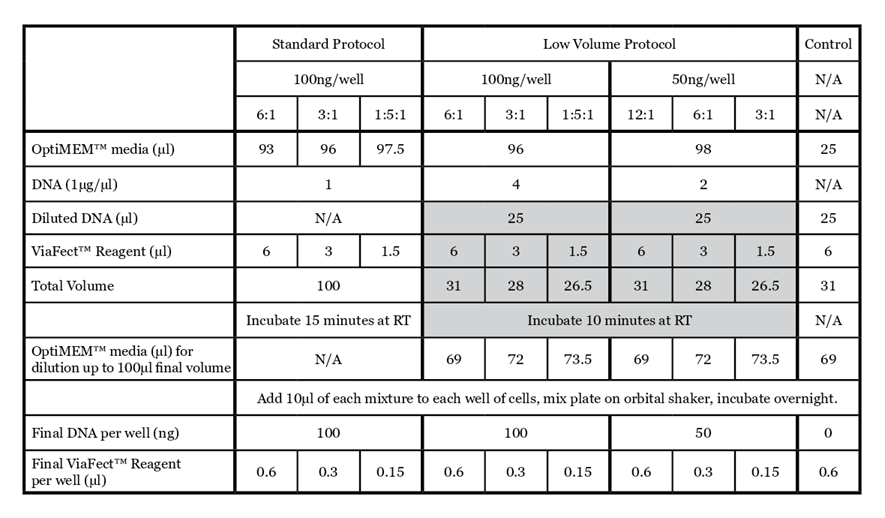 In contrast, A549 cells showed equivalent levels of reporter expression when the alternate protocol was used (Figure 2). This can be achieved with the alternate protocol by using either less ViaFect™ Transfection Reagent or DNA, providing an option to decrease the amount of reagents consumed. Similarly, results in C2C12 cells demonstrated modest improvements with the low volume protocol. These results were also observed when less ViaFect™ Transfection Reagent was used for the transfection (Figure 3).

The results with the K562 suspension cells showed a different trend compared to the adherent cell lines tested. For these cells, the maximum expression of both reporters was observed with the lowest amounts of ViaFect™ Transfection Reagent using either protocol (Figure 4). However, the low volume protocol did deliver the highest levels of reporter expression and this was observed with the lowest amounts of DNA and ViaFect™ Transfection Reagent. Minimal impact on cell viability was observed across all experimental conditions using both transfection protocols.