Advances in gene expression technologies have led to the identification of molecular markers associated with stem cell pluripotency and differentiation (1) . Quantitative PCR (qPCR), in particular, has proven to be a valuable method in nucleic acid quantitation. By measuring PCR product accumulation in real time, this technique provides greater sensitivity and more accurate quantitation than traditional endpoint PCR. Coupled with reverse transcription, qPCR has become a powerful tool to characterize gene expression.

The GoTaq® qPCR Master Mix is a novel 2X qPCR master mix and includes a proprietary double-stranded DNA-binding dye that can be used at a higher concentration than SYBR® Green I because it is less inhibitory in an amplification reaction, producing significantly brighter fluorescence. Excitation and emission spectra of the dye are similar to those of SYBR® Green I, so the dye is compatible with available real-time instrumentation. Additionally, the GoTaq® qPCR Master Mix features GoTaq® Hot Start Polymerase, allowing reaction setup at room temperature (2) .

In these experiments, we used the GoTaq® qPCR Master Mix with primer pairs that are specific to relevant transcripts to monitor the differentiation state of stem cell cultures following growth factor treatment.

The GoTaq® qPCR Master Mix (Cat.# A6001) quantifies DNA present in a reaction by measuring the increase in fluorescence as PCR products accumulate. As PCR amplification proceeds, more DNA is available to bind the dye, causing fluorescence to increase. When enough PCR product accumulates, the level of fluorescence crosses a detection threshold. This point is called the quantification cycle (Cq), and because Cq is proportional to the amount of starting DNA, Cq values can be used to compare different samples. The smaller the Cq value, the higher the level of gene expression. Although Cq is now the preferred terminology, it has sometimes been referred to as the CT or cycle threshold (3) . When compared to other systems, GoTaq® qPCR Master Mix produces a significantly brighter fluorescent signal and greater sensitivity

RNA was extracted from various cell samples using the SV Total RNA Isolation System (Cat.# Z3100). To avoid potential amplification of contaminating genomic DNA, the extraction protocol was modified to incorporate an extra DNase digestion step after purification using the RQ1 RNase-Free DNase (Cat.# M6101). This was particularly important when using amplification assays that are designed within a single exon (for example, the SOX2 transcript contains no introns).

In preparation for qPCR amplification, cDNA templates were synthesized from 100ng of each RNA sample using the GoScript™ Reverse Transcription System (Cat.# A5000). Following thermal inactivation of the reverse transcriptase, the cDNA was amplified using the GoTaq® qPCR Master Mix.

In this study, H9 stem cells were treated with growth factors to stimulate neuronal differentiation (4) . After differentiating for 10 and 30 days, cell samples were collected, total RNA was isolated and cDNA was synthesized. The GoTaq® qPCR Master Mix was used to determine gene expression levels. The transcripts LIN28, NANOG, and POU5F1 are associated with stem cell pluripotency (5) (6) as stem cells differentiate, expression of these pluripotency-associated transcripts decreases. Gene expression levels of these pluripotency markers were compared among treated cells and two controls, undifferentiated stem cells and a differentiated brain sample. To more accurately evaluate the change in gene expression between different RNA samples, the results were normalized against the reference transcript, housekeeping gene glyceraldehyde-3-phosphate dehydrogenase (GAPDH).

GoTaq® amplification of the pluripotency-associated transcripts showed dynamic changes in the expression of those genes as cells differentiated. GAPDH expression remained unchanged regardless of the state of differentiation.

As stem cells are induced to differentiate into cardiomyocytes, genes associated with the formation of heart tissue, such as NPPA and MYH6, are expressed. H9 stem cells were treated with growth factors to stimulate cardiomyocyte differentiation (7) . After 40 days, beating cardiomyocytes were observed, and cell samples were collected. Total RNA was isolated, then reverse transcribed prior to qPCR. Amplification of the NPPA and MYH6 transcripts with GoTaq® qPCR Master Mix showed an increase in expression of these genes after the cells differentiated. GAPDH expression was unchanged following differentiation. 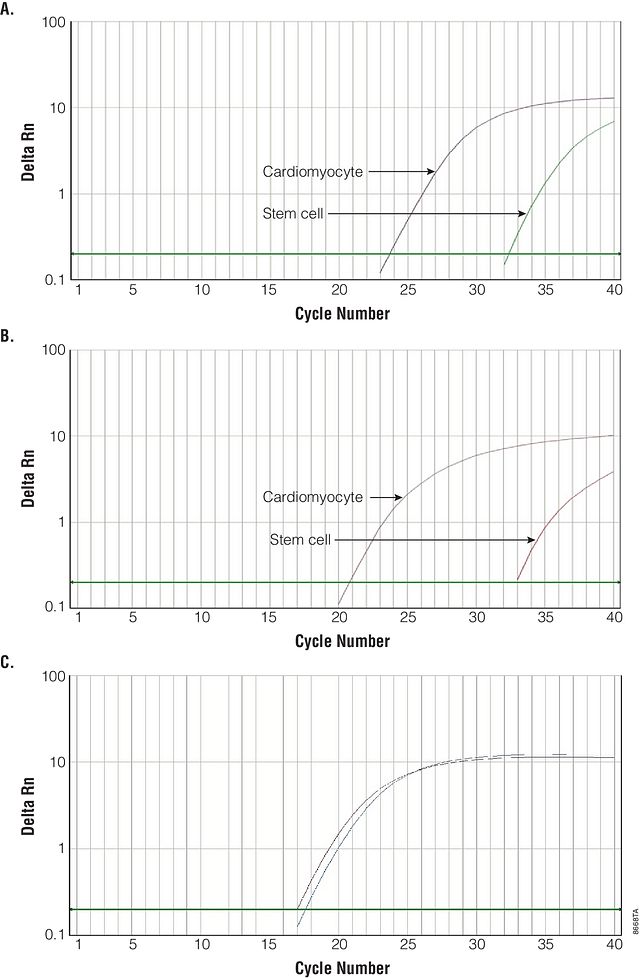 As stem cells are induced to differentiate into pancreatic cells, genes that are associated with the formation of pancreas tissue, such as CER, are expressed. Expression of these transcripts can change over time, as the cells differentiate. 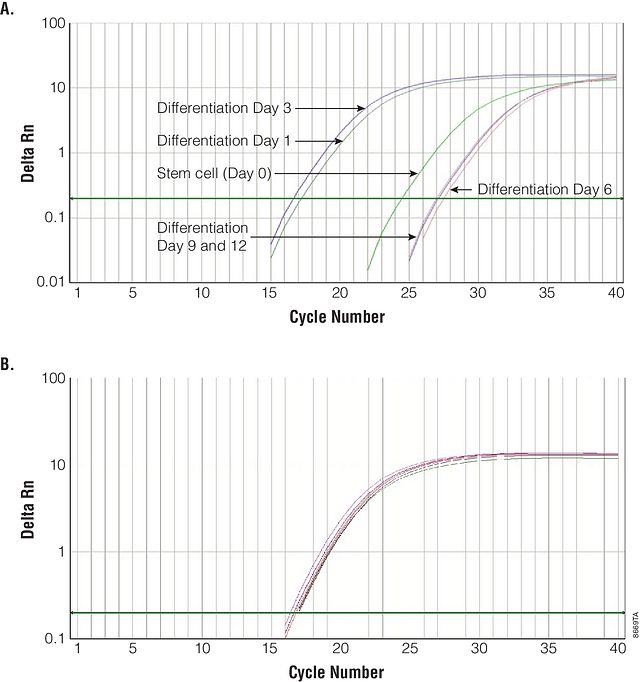 The authors would like to acknowledge Clive Svendsen, Soshana Svendsen, Dhruv Sareen and Allison Ebert at the University of Wisconsin—Madison, for providing the cells used in this study and for their expertise and help with cell differentiation.

SYBR is a registered trademark of Molecular Probes, Inc.