Your Key to Real-Time Quantitative PCR

PCR has historically been performed as an endpoint assay, where DNA is amplified then analyzed by gel electrophoresis. However, PCR is only truly quantitative when measurements are taken during the exponential phase, when reagents are not limiting and the amount of PCR product is proportional to the quantity of the input template. As the number of PCR cycles increases, the reaction enters the plateau phase, where reagents become limiting, the DNA polymerase loses activity, inhibitors build up and the PCR product can accumulate to a concentration where reannealing of the denatured DNA strands competes with primer annealing. The cycle number at which the reaction transitions from the exponential phase to the plateau phase varies with the template, primers and reaction conditions.

Real-time PCR allows measurements to be taken throughout each cycle within the exponential phase, improving accuracy and eliminating the time and effort required for downstream analysis. The earliest real-time PCR experiments involved adding ethidium bromide to a PCR then monitoring the change in fluorescence due to the accumulation of double-stranded PCR product throughout the thermal cycling with a fiber optic cable and a spectrofluorometer(1). Since these early experiments, many new approaches to real-time PCR and more sophisticated instruments that perform the thermal cycling steps and monitor fluorescence detection at each PCR cycle have been developed.

There are several general categories of real-time PCR probes, including hydrolysis, hairpin and simple hybridization probes. These probes, which are often short oligonucleotides, contain sequence that is complementary to the target and anneal to the PCR product. The number of probes and the location of the fluorescent reporters can differ.

Hydrolysis probes are labeled with a fluor at the 5´-end and a quencher at the 3´-end, and because the two reporters are in close proximity, the fluorescent signal is quenched. During the annealing step, the probe hybridizes to PCR product synthesized in previous amplification cycles. The resulting probe:target hybrid is a substrate for the 5´→3´ exonuclease activity of Taq DNA polymerase, which degrades the annealed probe(3) and liberates the fluor. The fluor is freed from the effects of the quencher, and the fluorescence increases.

Hairpin probes contain inverted repeats separated by a sequence complementary to the target DNA. The repeats anneal to form a hairpin structure, where the fluor at the 5´-end and a quencher at the 3´-end are in close proximity, quenching the fluorescent signal. The hairpin probe is designed so that the probe binds preferentially to the target DNA rather than retains the hairpin structure. As the reaction progresses, the probe anneals to the accumulating PCR product, and as a result, the fluor and quencher become physically separated. The fluor is no longer quenched, and the level of fluorescence increases. These probes can be difficult to design properly. Secondary structure needs to be mapped out carefully to ensure that the probe anneals preferentially to the PCR product.

More recently, hairpin probes have become part of the PCR primer (reviewed by Bustin(4)). In this approach, the stem-loop structure of the hairpin probe is attached via a nonamplifiable linker to the specific PCR primer. Once the primer is extended, the complementary sequence within the hairpin anneals to the newly synthesized PCR product, disrupting the hairpin and separating the fluor and quencher. A similar approach involves a specific PCR primer linked to a double-stranded oligonucleotide probe. The probe consists of a fluorescently labeled strand and a quencher-labeled strand and has sequence that is complementary to the PCR product. In the absence of PCR product, the two strands anneal, the fluor and quencher are in close proximity, and fluorescence is quenched. As the PCR product accumulates, one strand anneals to the PCR product instead of the second strand of the probe, freeing the fluor from the energy-absorbing effects of the quencher. These probes involve intramolecular hybridization, which is kinetically more favorable than intermolecular hybridizations.

The use of simple hybridization probes involves either two labeled probes or one labeled probe and a labeled PCR primer. In the first approach, the energy emitted by the fluor on one probe is absorbed by a fluor on the second probe, which hybridizes nearby. In the second approach, the emitted energy is absorbed by a second fluor that has been incorporated into the PCR product as part of the PCR primer. Both of these approaches result in increased fluorescence of the energy acceptor and decreased fluorescence of the energy donor. The use of hybridization probes can be simplified even further so that only one labeled probe is required. In this approach, quenching of the fluor by deoxyguanosine is used to bring about a change in fluorescence(5)(6). The labeled probe anneals so that the fluor is in close proximity to G residues within the target sequence. As the frequency of probe annealing increases, the level of fluorescence in the reaction decreases due to deoxyguanosine quenching. The advantage of simple hybridization probes is their ability to be multiplexed more easily than hydrolysis and hairpin probes through the use of differently colored fluors and probes with different melting temperatures (reviewed by Wittwer(7)).

A recently described real-time PCR technology has the advantage that there are no probes to design and only one PCR primer is labeled. This technology takes advantage of the specific interaction between two modified nucleotides, isoguanine (iso-dG) and 5´-methylisocytosine (iso-dC)(8)(9)(10). One PCR primer is synthesized with an iso-dC residue as the 5´-terminal nucleotide and a fluorescent label at the 5´-end; the second primer is unlabeled. During PCR, the labeled primer is annealed and extended, becoming part of the template used during the next round of amplification. During subsequent rounds of amplification, iso-dGTP, which is available in the nucleotide mix as quencher-labeled iso-dGTP, pairs specifically with iso-dC and is incorporated (Figure 1). The close proximity of the quencher and the fluorescent label on the opposite strand quenches the fluorescent signal. Additional information about this technology is available in Promega Notes 90. 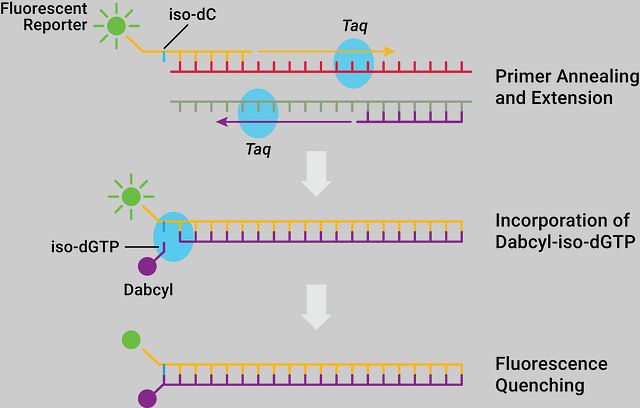 Accurate quantitation requires the appropriate controls and normalization. Contamination of a reaction with the product of previous amplifications or other exogenous sources of the target DNA or RNA can cause false-positive signals and inaccurate results. When using a DNA or RNA template, a no-template control reaction should be included to detect contamination. For reactions with an RNA template, the reverse transcriptase should be omitted from the “no-RT” control reaction to ensure that the amplification products did not originate from DNA rather than RNA. Other controls may also be desirable(11).

In quantitative RT-PCR, a reference template is often used to normalize for differences in the amount of template added to the reaction (reviewed by Bustin(4)(11)). Ideally, this reference has constant expression levels and does not vary with cell type, developmental stage or experimental conditions. Unfortunately, the ideal reference does not exist. Researchers often use various genes, rRNA and total RNA as a reference, depending upon their experimental systems(11).

In the simplest real-time PCR experiments, one target is amplified and analyzed. However, multiple targets can be simultaneously analyzed through the use of primers or probes labeled with multiple fluors. Real-time PCR instruments can distinguish and monitor the fluorescence emission spectra of each fluor, resulting in quantitation of each target. For some real-time PCR approaches, multiplexing can also be accomplished by amplifying products with distinct melting temperatures(7).

There are many approaches to quantitative real-time PCR, each of which has advantages and disadvantages. Many of these techniques allow analysis of many targets in a single, multiplexed reaction through the use of multiple fluors and the amplification of sequences with distinguishable melting temperatures. By performing the appropriate control reactions and generating a melt curve to confirm amplification specificity, real-time PCR can be a fast, accurate and sensitive method to quantitate nucleic acids.

BODIPY and SYBR are registered trademarks of Molecular Probes, Inc.