Amplification of a large p300 cDNA was accomplished using a combination of Taq DNA Polymerase and the proofreading Pfu DNA Polymerase (Cat.# M7741). The resulting 7.5kb DNA fragment was resolved on an agarose gel.

Transformation of cells by human adenoviruses is accomplished by alterations in cellular gene expression. Essential for the transformation is the adenovirus-E1A protein. The E1A protein exerts its effect by binding to cellular proteins, like the retinoblastoma protein and the p300 protein. The p300 protein is known to be a transcriptional coactivator for various transcription factors (1) . In our studies we focus on clarifying the role of the binding of E1A to p300 in the transformation process. For this study, E1A and p300 expression constructs were needed. We used PCR amplification as the first step in making these expression constructs, as described for the 7.5kb p300 cDNA in this report.

The combination of Taq DNA polymerase and a low level of thermostable DNA polymerase that exhibits a 3´-exonuclease activity (proofreading DNA polymerase, e.g., Pfu DNA polymerase) has been shown to successfully amplify DNA fragments up to 35kb (2) . This PCR amplification of large DNA templates results in specific amplification products in sufficient amounts for downstream applications. This approach has been applied to the 7.5kb p300 cDNA using a blend of Taq/Pfu DNA Polymerase.

After amplification 10µl of the reaction mixture was tested on a 1% agarose gel containing ethidium bromide. Amplified fragments were visualized by UV light. Fragment size was estimated by inclusion of lambda HindIII/EcoRI markers.

Figure 1 shows the results of the amplification. A fragment of the predicted size (7.5kb) could be seen; no other fragments were observed. 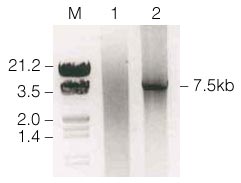 Previously, PCR amplification of total p300 cDNA with Taq DNA polymerase was hampered by the large size of the cDNA. Generally low or no yield is obtained and mutations are introduced. However, the ability to PCR amplify long fragments with high specificity would speed and simplify the analysis of the complete p300 cDNA. A plasmid containing p300 cDNA was used as a template in a PCR amplification. Total length of this plasmid was 13kb. Using the protocol described in this report, a 7.5kb fragment could be amplified from this plasmid; this is the expected length of the p300 cDNA. Amplification of the 7.5kb fragment with no apparent nonspecific amplification products suggests that the procedure was specific for the target DNA.