Here we describe two lysine deacetylase activity assays, the HDAC-Glo™ I/II and SIRT-Glo™ Assays, which are useful for the detection of HDAC class I and II enzymes and the class III sirtuin enzymes, respectively. These simple, homogeneous “add-mix-measure” assays leverage bioluminescence to achieve robust and sensitive signal output useful in everything from target validation to high-throughput screening activities. Furthermore, these assays can be multiplexed with viability and cytotoxicity assays to correlate deacetylase inhibition with cellular fate.

The histone deacetylase (HDAC) family of enzymes consists of 18 members that are organized based upon homology with their yeast counterparts. This family is divided into four main groups: the zinc-dependent class I (HDACs 1, 2, 3 and 8), class IIa (HDACs 4, 5, 7 and 9) and class IIb (HDACs 6 and 10) enzymes; and the NAD+-dependent class III sirtuins (Sirts 1–7). HDAC 11 shares features from both class I and II HDACs and is often grouped into a separate class IV.

Class I HDACs are ubiquitously expressed and localized primarily within the nucleus, whereas class II HDACs tend to be tissue-specific and shuttle between the nucleus and cytoplasm(1)(2). The class III sirtuins are localized primarily within nuclear and mitochondrial regions in the cell(3). This entire family of epigenetic modifiers is capable of removing Ɛ-acetyl moieties from lysine residues located on N-terminal histone tails, resulting in a condensed chromatin structure and typically repressed gene transcription. However, these enzymes are also known to deacetylate numerous non-histone cellular proteins, leading to diverse biological effects(4).

HDAC dysregulation has been noted in multiple disease states, including several forms of cancer, congestive heart failure, diabetes, inflammation and neurological disorders(5)(6)(7)(8). Therefore, considerable research effort has been focused on identifying therapeutically relevant HDAC inhibitors to alleviate aberrant HDAC activity stresses. Despite this extensive effort, existing tools to characterize HDAC function suffer from poor sensitivity, detection interferences or are time-consuming to apply. Thus, a simple, robust and sensitive assay, responsive to the various enzyme isoforms, would provide researchers with a much needed investigatory tool for characterization of HDAC function.

In this report, we describe two lysine deacetylase activity assays useful for the detection of zinc-dependent HDAC and NAD+-dependent sirtuin activities. These assays utilize single-reagent addition, and homogeneous, bioluminescent technology, which provides a robust and proportional signal over a wide range of enzyme concentrations. Moreover, the assays produce highly sensitive and scalable signals that remain stable for hours, making the assays useful for 96-, 384- and 1536-high-throughput formats. The HDAC-Glo™ I/II Assay is broadly useful for all class I and II HDAC enzymes and can be used with recombinant, extract and cell-based sources of deacetylases. The SIRT-Glo™ Assay is intended for biochemical applications with purified sirtuins.

The HDAC-Glo™ I/II and SIRT-Glo™ Assays use acetylated peptide substrates derived from sequences found in histone 4 and p53 proteins, respectively, which are conjugated to aminoluciferin (Figure 1). These chemically-engineered peptides prevent developer- or luciferase-mediated activities prior to the specific HDAC or Sirt deacetylation event. Upon deacetylation, the de-protected substrate undergoes specific proteolytic cleavage by the developer reagent to yield aminoluciferin and the peptide. Liberated aminoluciferin product is then quantified using Ultra-Glo™ Recombinant Firefly Luciferase. These enzymatic reactions occur virtually simultaneously to produce “glow-type” luminescence upon addition of a single reagent.

HDAC or sirtuin activity deacetylates it's respective luminogenic substrate, making the peptide sensitive to a specific proteolytic cleavage event that is mediated by the developer reagent and liberates aminoluciferin. Free aminoluciferin then can be measured using the Ultra-Glo™ Recombinant Firefly Luciferase reaction to produce a stable, persistent emission of light. Boc represents an amino-terminal blocking group that protects the HDAC substrate from nonspecific cleavage. A non-acetylated form of both the HDAC-Glo™ I/II and SIRT-Glo™ peptides is available for detecting assay interferences. Note: All three enzymatic events occur in coupled, homogeneous, nearly simultaneous reactions that reach steady state in 15–45 minutes.

The “add-mix-measure” reagents are created by rehydrating the lyophilized HDAC-Glo™ I/II or SIRT-Glo™ Substrate with buffer, (Figure 2) then adding the Developer Reagent. This complete reagent is added directly to the deacetylase source in a 1:1 ratio, followed by a brief incubation (15–45 minutes) to achieve signal steady state. This steady-state signal is stable for several hours, allowing additional flexibility for automation by facilitating the reading of multiple plates. The HDAC-Glo™ I/II and SIRT-Glo™ substrates are cell-permeable, though only the HDAC-Glo™ I/II Assay is recommended for cell-based applications due to HDAC class I and II cross-reactivity with the SIRT-Glo™ peptide sequence. Substrate permeability allows the option of performing cell-based HDAC assays in either a lytic or non-lytic manner.

Figure 2. Overview of the HDAC-Glo™ I/II or SIRT-Glo™ Assay protocol.

To demonstrate broad isozyme responsiveness, recombinant deacetylases were titrated and analyzed with either the HDAC-Glo™ I/II  or SIRT-Glo™ Assay (Figure 3). The HDAC-Glo™ I/II Assay was responsive to all members of the class I and II HDACs, including HDAC 11. Subsequent experiments using pharmacologically relevant HDAC inhibitors produced IC50 profiles consistent with values reported in the literature(9). The SIRT-Glo™ Assay measured activity from sirtuins 1, 2 and 3 that was NAD+-dependent and nicotinamide-inhibitable (data not shown). Both assays achieved dynamic signal-to-noise ratios that remained linear over several orders of magnitude of enzyme concentration, thus reducing the need for extensive enzyme titrations or high enzyme content per well.

Recombinant HDAC (Panel A) or sirtuin (Panel B) was diluted to 400 or 800ng/ml, respectively, in either HDAC-Glo™ I/II or SIRT-Glo™ Buffer, then twofold serially diluted in a 96-well plate. An equal volume of either HDAC-Glo™ I/II or SIRT-Glo™ Reagent was added, and luminescence was measured after 15 minutes at room temperature. The recombinant enzymes were obtained from various vendors (HDACs 1–3, 6 and 8 from Enzo; HDAC 4 from Cayman Chemical; HDAC 7 from Millipore; HDACs 5, 9–11 and Sirts 1–3 from SignalChem). Data was plotted using GraphPad Prism® software. Data represent the mean ± standard deviation of four samples.

Assay Sensitivity and Ease of Use

To benchmark assay sensitivity, HDAC- Glo™ I/II and SIRT-Glo™ Assays were compared to commercially available fluorescent assay methods (Figure 4). HeLa cell nuclear extracts or recombinant sirtuin 2 were titrated and assayed per the manufacturer’s instructions. The HDAC-Glo™ I/II and SIRT-Glo™ Assays delivered at least a 400-fold increase in sensitivity when compared to the fluorescent methods. This enhanced sensitivity allows for tangible cost savings due to a reduced requirement for recombinant enzyme and greater resolution of non-abundant deacetylase activities.

In addition, there was a notable time savings associated with use of the HDAC-Glo™ I/II and SIRT-Glo™ Assays due to the relatively short 15-minute time period between reagent addition and data acquisition. In contrast, available fluorescence-based assays typically require multiple steps and more than two hours to complete.

The HDAC-Glo™ I/II Assay can be multiplexed with fluorescent viability and cytotoxicity chemistries to evaluate the cellular consequences of prolonged HDAC inhibition. This feature is possible because the bioluminescent signal is spectrally distinct from the fluorescent measurements, allowing users to extract multiple data points from the same assay well, saving both time and money while reducing the waste stream. To establish this assay utility, HDAC activity and cell viability were monitored in the same well by multiplexing HDAC-Glo™ I/II and CellTiter-Fluor™ assay chemistries, respectively (Figure 5). Here, K562 cells were exposed to varying concentrations of the model HDAC inhibitors SAHA and valproic acid, then analyzed using the CellTiter-Fluor™ Assay, followed by the HDAC-Glo™ I/II Assay. Both inhibitors exhibited a dose-dependent HDAC inhibition profile in general agreement with published reports, but displayed divergent cell toxicity profiles(10).

K562 cells were seeded at 10,000 cells per well. Cells were treated with varying concentrations of the HDAC inhibitors SAHA (Panel A) and  Valproic Acid (Panel B) for 24 hours at room temperature. Cell viability was then measured using the CellTiter-Fluor™ Assay, and HDAC inhibition was measured with the HDAC-Glo™ I/II Assay. Data was plotted using GraphPad Prism® software. Data represent the mean ± standard deviation of three samples. For Panels A and B, the left y axis refers to viability fluorescence and the right y axis refers to HDAC luminescence.

To monitor on- and off-target HDAC inhibitor specificity, HDAC-Glo™ I/II Assay can also be paired with ApoTox-Glo™ Assay to assess cell viability, toxicity and caspase activation. In this example (Figure 6), both iPS-derived cardiomyocytes and U937 cancer cells were exposed to varying concentrations of the HDAC inhibitor Apicidin for 24 hours. HDAC inhibition was observed in both cell types; however, only the U937 cells displayed cellular toxicity and subsequent caspase activation. Therefore, the capacity to multiplex with viability or cytotoxicity markers provides a unique opportunity to evaluate on-target effects and phenotypic drug efficacy (Figure 6).

Apicidin was applied to either iPS-derived cardiomyocytes (Panels A and B; Cellular Dynamics International) or U937 cells (Panels C and D) for 24 hours. HDAC inhibition was determined using the HDAC-Glo™ I/II Assay, whereas cell viability, cytotoxicity and caspase activation were measured using the ApoTox-Glo™ Assay. Potent HDAC inhibition was observed in both cell types, but only cancer cells underwent apoptosis as a consequence of HDAC inhibition. For Panels B and D, the left y axis refers to viability and cytotoxicity fluorescence and the right y axis refers to apoptosis luminescence.

The HDAC-Glo™ I/II and SIRT-Glo™ Assay chemistries utilize a coupled enzyme system (developer reagent and luciferase) to measure deacetylase activity. All coupled assays are subject to potential detection interferences that may generate false hits during high-throughput screening activities. To address this concern, a non-acetylated form of the substrate was produced for counter-screening nonselective hits against the coupled detection enzymes. This non-acetylated peptide can be introduced directly into the prepared reagent and added to the test compounds. Compounds that inhibit either the HDAC-Glo™ I/II or SIRT-Glo™ Assay and the counter-screening chemistry are considered non-specific hits and should be excluded from further testing. In contrast, compounds that selectively inhibit the HDAC-Glo™ I/II or SIRT-Glo™ Assay, but not the counter-screen with control peptide substrates, are considered hits worthy of additional study (Figure 7). 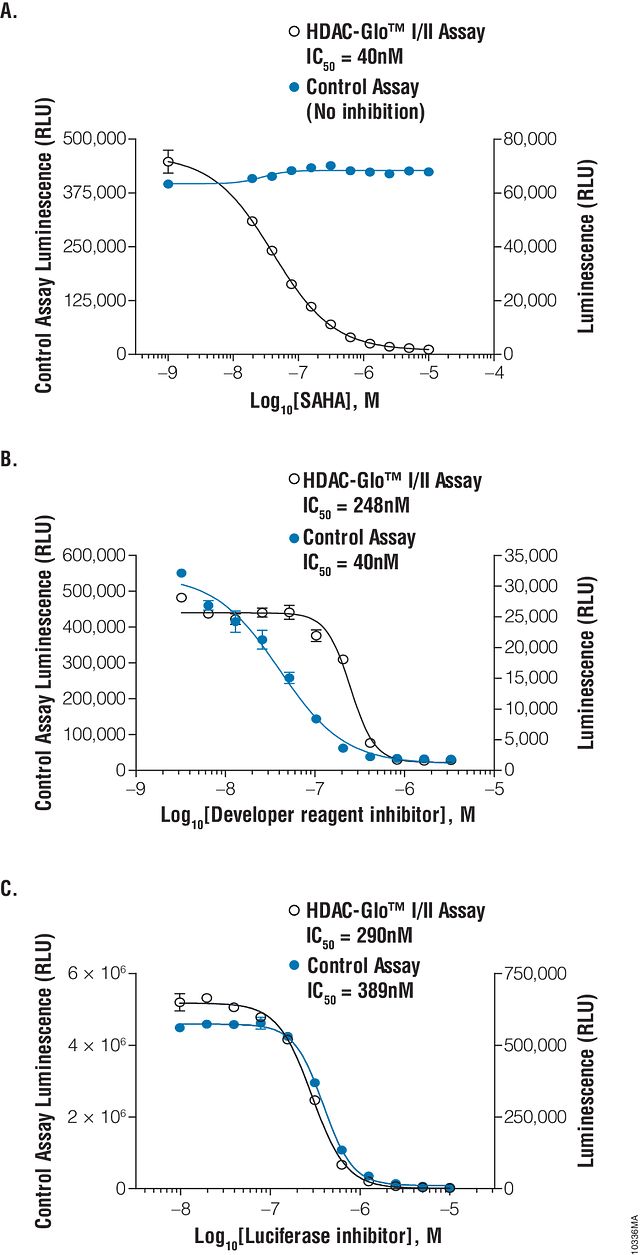 Both assays exhibit broad enzyme utility, with the HDAC-Glo™ I/II Assay responsive to all members of class I and II HDACs (including HDAC 11) and the SIRT-Glo™ Assay sensitive to sirtuins 1-3. The HDAC-Glo™ I/II Assay provides additional functionality for cell-based applications by utilizing a cell-permeable substrate suitable to either lytic or non-lytic procedures. Furthermore, its ability to multiplex with several spectrally distinct fluorescent technologies adds assay flexibility. This feature allows users to acquire numerous data points from the same well, thereby reducing time and cost, while providing more biologically relevant data per well.

GraphPad Prism is a registered trademark of GraphPad Software, Inc.