It has been nearly 10 years since a core set of loci for all European DNA databases, proposed by the European Network of Forensic Science Institutes (ENFSI), was ratified (1) . The European Standard Set (ESS) of loci, which includes D3S1358, D8S1179, D18S51, D21S11, FGA, TH01 and vWA, ensures overlap of the loci included in national databases across Europe. As the number of profiles in European databases continued to expand, Belgium, Germany, Spain, France, Luxembourg, the Netherlands and Austria enacted the Prüm Treaty (2) , which enables police forces from individual countries to compare and exchange data more readily. It has since been adopted by the European Union, which introduced a timeline for other EU nations to become compliant (3) . While individual nations work to draft suitable legislation, European thought leaders and forensic profiling consortiums have come together to determine the scope of the next European standard.

It is clear that the original ESS loci will not be sufficient when cooperation and collaboration increase between law enforcement of European nations. To address this, ENFSI and the European DNA Profiling Group (EDNAP) met to expand the ESS and determine the future of European STR kits. Based on the outcome of this meeting a strategy was introduced (4) , and later amended (5) , to address issues and create a more consistent, powerful and robust STR genotyping system. To this end, a strategy was proposed in which more loci would be added to the core set (5) . The introduction of new miniSTR loci and conversion of some current ESS loci to miniSTRs were also priorities of this initiative.

The PowerPlex® ESX and PowerPlex® ESI Systems address the needs of the next-generation European STR genotyping systems. Their design and combined discrimination power offer unique opportunities for corroboration as well as deconvolution of STR data. The multiple configurations of these kits allow end users to choose the system, or combination of systems, that best suits their needs. We feel the strength of this approach is that, by addressing both ENFSI strategies simultaneously, it eliminates the need for stepwise development and eventual convergence of next-generation STR systems for the European market (5) . It also prevents national laboratories from having to work with loci in a configuration with which they are not comfortable.

The PowerPlex® ESX and ESI Systems

Inclusion of the current ESS loci in the PowerPlex® ESX and ESI Systems ensures that current profiles in databases will remain relevant. ENFSI/EDNAP loci give the kits the power and uniformity that will be required in Europe’s next-generation kits. The overlap of loci and inclusion of divergent miniSTR loci in the PowerPlex® ESX and ESI Systems will help confirm questionable results and genotype poor-quality samples. The SE33 option should appeal to laboratories in countries, such as Germany, where SE33 is included in databases, while users in countries and laboratories that do not report SE33 alleles will not have to use a STR genotyping system containing the locus.

Reaction setup allows a generous volume of template DNA, which is beneficial when working with dilute samples. The kit configurations assure that reactions are set up with minimal pipetting steps, reducing the chance for errors and contamination. The CC5 ILS 500 and allelic ladder mix (included with post-amplification components) allow accurate sizing of amplified products. Panel and bin files for GeneMapper® ID software, version 3.2, and panel, bin and stutter files for GeneMapper® ID-X software are available at: www.promega.com/geneticidtools/panels_bins/

Performance of the PowerPlex® ESX and ESI Systems

A key consideration of the European forensic community was robust amplification despite template DNA degradation or inhibition that may be seen in crime scene samples. The presence of different loci as miniSTRs in the ESX and ESI configurations enables recovery of more information from degraded samples when both systems are used in combination. The formulation of the master mix ensures that carryover of PCR inhibitors is of little concern. Full profiles were generated in the presence of 300µM hematin (Figure 2). Each of the PowerPlex® ESX and ESI Systems also exhibits a high tolerance for common PCR inhibitors found in soil and dyes (data not shown). Together, these data show that these kits exhibit a resistance to common PCR inhibitors that had not been demonstrated in commercially available multiplex STR systems prior to PowerPlex® 16 HS (6) . The inclusion of mini- and midiSTRs, combined with extreme resistance to inhibitors, makes the PowerPlex® ESX and ESI Systems acutely robust even when tasked with challenging samples. 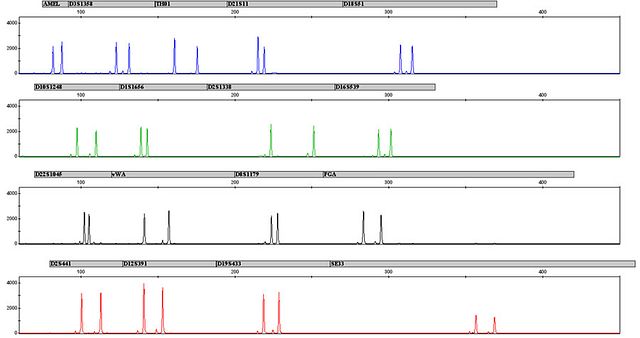 PowerPlex® ESX 17 amplifications were performed in the presence of 300µM hematin. Amplification reactions were set up using 500pg of template DNA. Once amplified, samples were separated using an Applied Biosystems 3130 Genetic Analyzer and a 3kV, 5-second injection. Note that the PowerPlex® ESX 16 and both ESI Systems gave similar results.

The PowerPlex® ESX and ESI Systems can accommodate a range of template DNA concentrations. Balance was optimized at 0.5ng of DNA using the manufacturer's recommended 30-cycle protocol (7) (8) (7) (9) , and product specifications ensure that it will amplify as little as 100pg of DNA (Figure 3). Developmental studies showed that the PowerPlex® ESX and ESI Systems are sensitive enough to give interpretable results when amplifying much less than 100pg of DNA (Figure 3).

Decreasing amounts of template were amplified using the PowerPlex® ESX 17 System. All amplifications were performed on an Applied Biosystems GeneAmp® PCR System 9700 as directed in the PowerPlex® ESX 17 System Technical Manual #TMD024. Once amplified, samples were separated using an Applied Biosystems 3130 Genetic Analyzer and a 3kV, 5-second injection. Representative electropherograms from three replicates are shown for 500pg, 60pg and 30pg template DNA (top to bottom). Using a 50RFU threshold, all alleles were called for the 500pg and 60pg samples. Across the three replicates of the 30pg samples, 80% (82/102) of alleles were called. Note that all PowerPlex® ESX and ESI Systems gave similar results.

The PowerPlex® ESX and ESI Systems satisfy the strategies set forth by the ENFSI and EDNAP in response to expanding European DNA databases and increased cooperation between EU member nations as a result of recent legislation. These kits offer a range of choices designed to satisfy diverse needs represented throughout Europe. The PowerPlex® ESX and PowerPlex® ESI kits were designed and optimized to provide the consistency, power of discrimination and robustness required for Europe’s next-generation STR systems. When appropriate, they also can be used in tandem to yield genotyping data with an unprecedented degree of clarity.