Stress response pathways use a common architecture involving dynamic regulation of protein turnover that allows for such alternate methods to be considered. For example, hypoxia-inducible factor-1A (HIF1A) pathway is acutely regulated by the ubiquitin-proteosome system (Figure 1). Under normoxic conditions, the transcription factor HIF1A is repressed by prolyl hydroxylation and VHL-directed ubiquitination. Ubiquitinated HIF1A becomes destined for proteosomal degradation, resulting in low levels of HIF1A protein and low basal levels of transcription of HIF1A-responsive genes. Upon transition to hypoxic conditions or chemical inhibition of HIF1A prolyl hydroxylation, HIF1A proteins decouple from the ubiquitin/proteasome pathway and accumulate in the nucleus. In turn, transactivation of various HIF1A-responsive genes occurs, resulting in a cellular response to hypoxic stress. Small molecule modulation of HIF1A signaling may prove promising in treating cancer or ischemic diseases, underscoring the value of quantitative methods for measuring HIF1A stabilization during drug discovery. 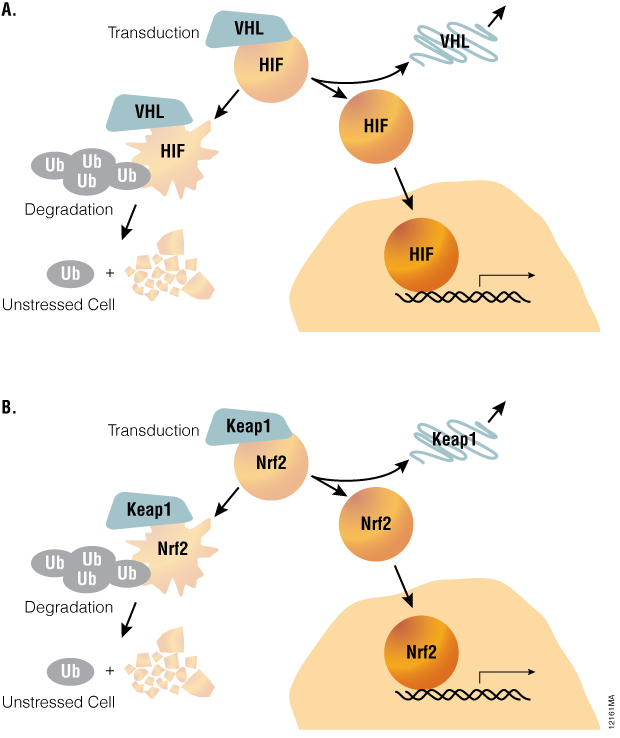 The oxidative stress response pathway is similarly regulated by protein lifetime (Table 1). In unperturbed cells, nuclear factor (erythroid-derived 2)-like 2 (NRF2) is subject to Keap1-directed ubiquitination and proteosomal degradation. Reactive oxygen species disrupt the interaction between Keap1 and NRF2, resulting in NRF2 accumulation and transactivation. NRF2 target genes are then responsible for scavenging reactive oxygen species and a return to cellular homeostasis. While HIF1A and NRF2 mechanisms are key examples of the relevance of protein lifetime in regulation of gene activation, this pathway architecture is conserved within many signaling pathways, as described in Table 1( (1) ). Thus, protein lifetime has the potential to be broadly exploited as a readout for critical upstream signaling nodes in adaptive stress response pathways. Due to its small size (19kDa) and intense bioluminescence output (Figure 2), NanoLuc® luciferase is ideally suited as a protein function reporter for quantifying protein lifetime dynamics. Changes in intracellular protein levels can be quantified using Nano-Glo® reagent in a simplified assay format, wherein the luminescence output of NanoLuc® luciferase  is used as a surrogate for the intracellular levels of the fusion protein. Via direct genetic fusions of NanoLuc® luciferase with HIF1A or NRF2 proteins, it is possible to measure hypoxia or oxidative stress-response signaling (respectively) in HCT116 colorectal cancer cells. Using a constitutive (e.g., CMV) promoter driving HIF1A-NanoLuc® or NRF2-NanoLuc®, changes in light output correlate to dynamic changes in protein levels. However, use of robust promoters such as CMV may result in unnaturally high intracellular levels of the protein of interest, creating potential assay artifacts. 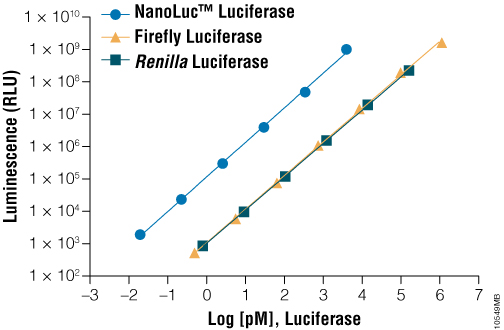 Figure 2. A comparison of luminescence of various purified luciferases in the presence of their optimal substrates. On a molar basis, NanoLuc® luciferase is much brighter than commonly used luciferases such as firefly luciferase and Renilla luciferase.

As shown in Figure 3, when HCT116 cells are transiently transfected with a 1:1,000 dilution of HIF1A-NanoLuc® plasmid DNA, 1, 10-phenanthroline (a known hypoxia mimetic) induces a dose- and time-dependent accumulation of the reporter fusion. Similarly, an NRF2-NanoLuc® fusion protein accumulates in HCT116 cells upon treatment with D,L-sulforaphane (a known inducer of reactive oxygen species). To ensure proper regulation of NRF2-NanoLuc® levels in unperturbed conditions, cells are cotransfected with KEAP1 expression DNA. These results serve to demonstrate the use of NanoLuc® luciferase as a protein function reporter for monitoring regulated changes in protein stability within stress response pathways. Furthermore, these responses occurred within 2–3 hours, compared to traditional reporter gene assays that require up to 16 hours to achieve optimal responses. Protein stability reporters of HIF1A and NRF2 provide a proximal readout of the targets of these chemical stressors, enabling a highly precise mode of compound action for toxicological screens during drug discovery. 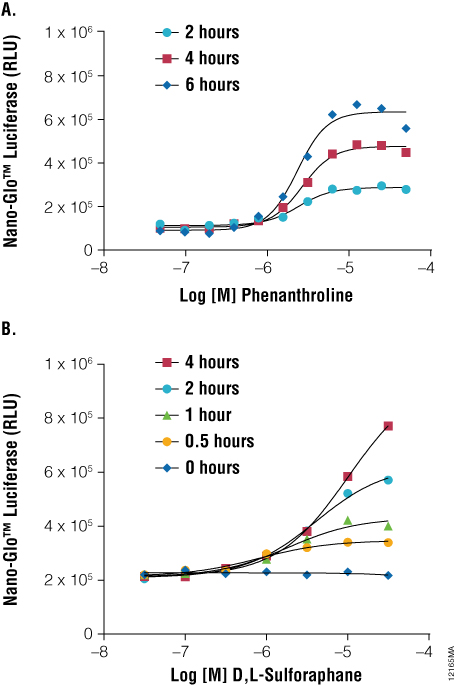 Figure 3. As a protein function reporter, NanoLuc® Luciferase enables quantitation of changes in protein stability following induction of stress response signaling. Panel A. HCT-116 cells were transiently transfected with the pNLF1-HIF1A[CMV/neo] Vector and Transfection Carrier DNA in hypoxia mimetic. Panel B. HCT-116 cells were transiently transfected with the pNLF1-NRF2[CMV/neo] Vector and pKEAP1 DNA and exposed to a stimulant. Treatments occurred as indicated and NanoLuc® Luciferase detected using Nano-Glo™ Luciferase Assay at the indicated time points using the GloMax®-Multi+ Plate Reader. 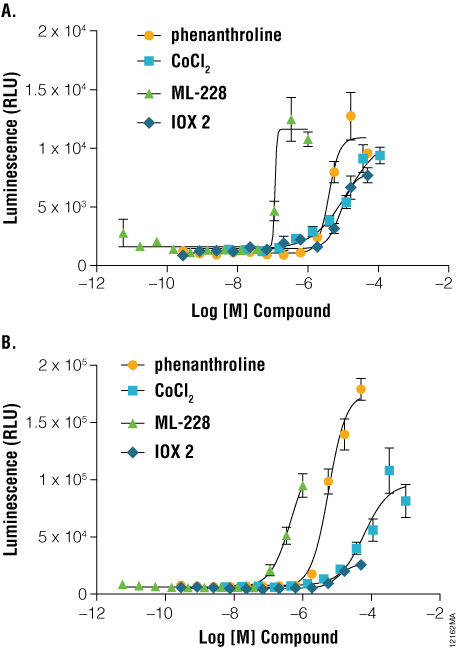 As a protein function reporter, NanoLuc® luciferase also provides a quantitative measure of protein levels from endogenously expressed genetic loci. As overexpression of the protein of interest may lead to assay artifacts, the ability to express the target protein at endogenous levels may be desirable. However, use of reporters with limited sensitivity provides a major challenge when the target protein is produced at endogenous levels, especially when the target protein is naturally unstable. To explore the utility of NanoLuc® luciferase as a reporter of endogenous protein stability, Horizon’s proprietary GENESIS™ platform was used to introduce the NanoLuc® gene into specific chromosomal loci as in‐frame protein fusions to HIF1A or NRF2. Figure 5. As a protein function reporter, NanoLuc® Luciferase enables detection of proteins expressed from endogenous gene loci. Engineered HCT116 cells expressing NanoLuc® Luciferase fused to endogenous HIF1A (Panel A) or NRF2 (Panel B) were stimulated with either tBHQ or 1,10-phenanthroline, respectively, with detection performed using the Nano-Glo™ Luciferase Assay, at the indicated time points. Both fusion constructs showed a dose- and time-dependent response.

As shown in Figure 5, HCT116 cells engineered with NanoLuc® as an in-frame fusion to a single allele of HIF1A can be used to monitor inducible changes in HIF1A levels upon treatment with 1, 10 phenanthroline. HCT116 cells similarly engineered with a NRF2-NanoLuc® fusion responded in a dose- and time-dependent manner to tertbutylhydroquinone (tBHQ). These results validate the use of NanoLuc® luciferase as an ultrasensitive reporter of protein stability dynamics without the need for overexpression.