The CellTiter-Glo® 3D Cell Viability Assay is designed for determining cell viability in 3D microtissue spheroids. The assay reagent penetrates large spheroids and has increased lytic capacity—allowing more accurate determination of viability compared to other assay methods. Based on the same chemistry as the classic CellTiter-Glo® Assay, this new 3D assay reagent measures ATP as an indicator of viability, and generates a luminescent readout that is much more sensitive than absorbance or fluorescence-based methods. In addition, the assay protocol is simple and fast, giving results in as little as 30 minutes.

Two-dimensional cell culture has long served as an invaluable tool for in vitro experiments. However, results derived from studying flat monolayers of cells adhered to plastic often do not properly reflect the in vivo situation. Various characteristics of actual tissue, such as morphology, cell-cell communication, gene expression, and biological responsiveness are much better represented by microtissues produced under 3D cell culture conditions that replicate these biological functions. Much effort has gone into the development of the variety of 3D cell culture models available, but little effort has gone into developing the reagents to effectively assay these models. There is a significant risk to data quality in assuming that assays designed for 2D monolayers will work equally well for 3D microtissues, especially considering the increased need for reagent penetration in microtissue spheroids. The CellTiter-Glo® 3D Assay is a new, single-component, liquid reagent for measuring cell viability. The assay has increased lytic capacity and is designed specifically for use with microtissues produced through 3D cell culture.

Initial studies with the classic CellTiter-Glo® Assay demonstrated effective lytic capacity with small microtissues. However, as the microtissues became larger the classic reagent under-reported the total amount of ATP present—as judged by comparison to results from a laborious trichloroacetic acid extraction procedure. Therefore, we optimized the CellTiter-Glo® Assay formulation to increase lytic capacity and generate a new, 3D-optimized bioluminescent cell viability assay. As shown in Table 1, both the classic CellTiter-Glo® and the CellTiter-Glo® 3D Assay reagents recover a similar amount of ATP from small HCT116 colon cancer spheroids (~200 µm diameter), but as the spheroids get larger (> 350 µm diameter), the CellTiter-Glo® 3D Reagent recovers 20–40% more ATP than the classic reagent. We have also observed similar increases in recovery for other cell types, including HEK293 embryonic kidney cells and HepG2 liver carcinoma cells (data not shown).

Table 1. ATP Detected by the Classic CellTiter-Glo® and CellTiter-Glo® 3D Assays. Different amounts of HCT116 cells (RPMI +10% FBS) were seeded in the InSphero GravityPLUS™  96-well hanging-drop platform and grown for 4 days. Microtissues were assayed by adding an equal volume of reagent to media volume, shaking for 5 minutes, and recording luminescence after 30 minutes using a GloMax® luminometer. The amount of ATP detected was determined by comparison with ATP standards.

However, for microtissues in 3D culture, the correlation between cells seeded and luminescent signal is often not linear. For example, with hanging-drop spheroids produced using the InSphero GravityPLUS™ 3D Culture and Assay Platform (Figure 2, Panel A), effects such as contact inhibition on cell proliferation and reduced metabolic activity in the central region of large spheroids cause the relationship between seeded cell number and luminescent signal to be curvilinear (Figure 2, Panel B). However, by including CellTox™ Green Dye, a cell membrane-impermeant fluorogenic DNA-binding dye, in our lytic assay we can show that as microtissue size increases, the amount of ATP detected (luminescence, RLU) by the CellTiter-Glo® 3D Assay is proportional to the amount of DNA detected (fluorescence, RFU; Figure 2, Panel C). This confirms that the CellTiter-Glo® 3D Assay is effectively lysing cells, resulting in release of ATP, and can accurately report the number of viable cells in microtissues produced through 3D cell culture.

Figure 2. Seeding density vs. size, ATP content and DNA content. Panel A. Differential contrast images of  HCT116 colon cancer spheroids grown for 4 days in the InSphero GravityPLUS™ 96-well hanging-drop platform after seeding with 400, 800, 1600, 2400, 3200, 4800, 6400, or 8000 cells. Images were acquired in an InSphero GravityTRAP™ plate. Panels B and C. An equivalent volume of CellTiter-Glo® 3D Reagent was added to all samples, and after 5 minutes of shaking, luminescence and/or fluorescence was recorded at 30 minutes. In Panel C, a 2X concentration of CellTox™ Green Dye was added to the CellTiter-Glo® 3D Reagent prior to sample addition. 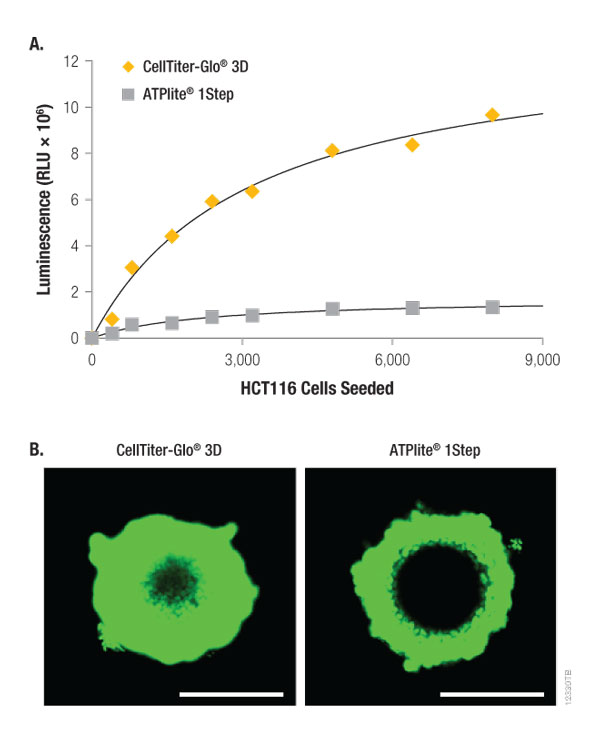 Figure 3. Lytic capacity of CellTiter-Glo® 3D compared to ATPlite 1Step Reagent. HCT116 colon cancer spheroids were generated by seeding cells in the InSphero GravityPLUS™ 96-well hanging-drop platform and grown for 4 days. Panel A. An equivalent volume of reagent was added to all samples, and after 5 minutes of shaking, luminescence was recorded at 30 minutes. Panel B. A 2X concentration of CellTox™ Green Dye was added to each CellTiter-Glo® 3D Reagent (left) or ATPlite™ 1Step Reagent (right) prior to sample addition, and after 5 minutes of shaking, the confocal laser fluorescent microscopy images were acquired at 30 minutes using Ex/Em: 488/520nm. The spheroids in Panel B are ~300 µm in diameter, and the bars in each image represent a distance of 200 µm.

Table 2. ATP Detected by the ATPlite™ 1Step and CellTiter-Glo® 3D Assays. Different amounts of HCT116 cells (RPMI +10% FBS) were seeded in the InSphero GravityPLUS™ 96-well hanging-drop platform and grown for 4 days. Microtissues were assayed by adding an equal volume of reagent to medium, shaking for 5 minutes and recording luminescence after 30 minutes with a GloMax® luminometer. The amount of ATP detected was determined by comparison with ATP standards.

In common with many bioluminescent assays, the CellTiter-Glo® 3D Assay exhibits a signal that is orders of magnitude above background (Figure 4). In contrast, other non-lytic viability assays that measure changes in fluorescence (e.g., alamarBlue®) or absorbance (e.g., MTT) generate signals that are only modestly higher than their no-cell control signals. In addition to this enhanced sensitivity, the CellTiter-Glo® 3D Assay has a much shorter assay time. The luminescent assay can be measured in 30 minutes or less, whereas alamarBlue® and MTT assays typically require multiple-hour incubations.

The CellTiter-Glo® 3D Assay is a new, validated bioluminescent assay for measuring the viability of cells produced through 3D cell culture. It provides a fast, easy-to-use, single-component liquid reagent with superior lytic capacity for greater preservation of ATP and enhanced penetration into 3D microtissues. This new reagent is more robust than our classic CellTiter-Glo® Assay or competing ATP viability assays and offers superior sensitivity for 3D cell culture.